Over several years in the 1870s, composer Bedrich Smetana wrote a series of six tone poems for orchestra that he titled Ma Vlast, or “My Country.” Although the patriotism explicit in Smetana’s music is genuine, the fact is Smetana was a citizen of the Habsburg Empire and grew up speaking German. His most popular piece of music is “Vlatva,” a glorification of the river that runs through what is now the Czech Republic, but is almost universally known by its German name, “Die Moldau.”

It is one of the stranger and unremarked oddnesses of history that most of those Nationalist composers of the 19th century had no nation to call home. Dvorak had no Czechoslovakia, Liszt had no Hungary, Edvard Grieg’s Norway was ruled by a Swedish king, and despite all the mazurkas and polonaises that Chopin wrote, there was no Poland on the face of the earth. Even the Germany extolled in Wagner’s “Die Meistersinger” was only a gleam in the eye of Otto von Bismarck.

In truth, they were not so much “nationalist” composers as composers of ethnic awareness. Which brings up an important point. What we mean by a “nation” is a fairly recent concoction, and although we tend nowadays to assume that a map divided into colors bounded by border lines is a natural and inevitable reality, history tells us otherwise.

We hear politicians and demagogues harangue us about national sovereignty and the threat of immigrants diluting our national character, and we tend to regard our country — regardless of whether it is the United States, Germany, China or Iraq — as a fixed and permanent “thing” consecrated by history and natural law. But a closer look tells us otherwise. Our idea of a nation-state is rather new in history, and may have been merely a temporary thing. To take it as unchanging and unchangeable is a serious miscalculation.

Going back before reliable history, kingdoms were just areas successfully defended by military leaders who demanded taxes in a kind of protection racket. No one spent much fret over what languages the subjugated people spoke, or what their ethnic descent might be.

Through the Middle Ages, when we speak of Henry V at Agincourt what we are talking about is real estate. Henry ruled land, not people. He owned most of the British Isle and a good chunk of the Continent. The people living on his land owed him taxes and fealty — meaning a term in the army when needed. There was no legal construct known as England or France or Germany, but feudal cross-relations and family ties securing deeds of title to chunks of real estate. The idea of a nation as we know it didn’t exist.

It wasn’t until 1648 and the Peace of Westphalia that the concept of the nation-state emerged, and we developed a sense that France exists whether or not a Bourbon sat on the throne, and that national borders were somehow permanentized — although, of course, they weren’t. Wars — now between nations instead of between kings — kept those boundary lines in flux.

Later ideas gave us different concept of nationhood, often in conflict with the Westphalian ideal. Ethnicity gave many people a different sense of identity, even though ethnicity itself is a slippery thing, and can swell and shrink through time, including and excluding various groups and subgroups. Are you European? Are you Polish? Are you a Slav or a German?

Ethnicity sometimes falters in face of language identity. We talk of “Russian speakers” in Ukraine. Are they Ukrainian or Russian? Certainly they are Slavs. Where do we draw the line?

The historical result of all these shifting ambiguities can be seen in the unstable borders seen on maps. Let’s take Poland as an example. If we think of the country as it exists currently, stuck between Germany and Ukraine, we might assume this was somehow the true and ultimately proper place for Poland. But the country has rolled around the map of Europe like a bead of mercury on a plate. At times it reached the Black Sea, at times it vanished from the face of the earth. You can see this in a clever You Tube video at: https://www.youtube.com/watch?v=66y49BnxLfQ 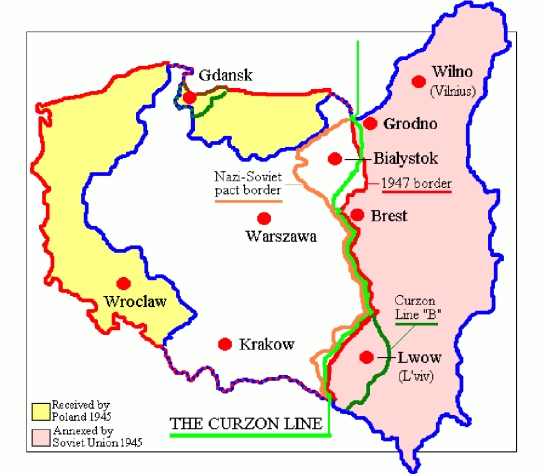 At times Poland expanded, at times, joined with the kingdom of Lithuania, after it was split into pieces and annexed by Prussia, Russia and Austria in 1795 it ceased to exist as a nation, until it was reconstituted in 1918 at the end of the First World War. It was invaded in 1939 by both Germany and the Soviet Union and essentially disappeared again. After World War II, because Stalin refused to give back his half, the entire country lifted up its skirts and moved some 200 miles to the west, where it set itself down again and became the Poland we have now — although that is no guarantee that it won’t move again sometime in the future. The eastern half of Poland became part of the Soviet Union until it split off and became Ukraine, while the eastern third of Germany, having lost the war, turned into the western half of Poland and millions of German-speaking inhabitants were politely asked to relocate in East Germany — which later reunited with West Germany to be the Germany we have today.

You might consider Yugoslavia, which is now several different sovereign nations, or the “sovereignty” of Czechoslovakia, which finally gave Smetana and Dvorak their own nation, only to dissolve into the Czech Republic and Slovakia.

These constantly unsteady borders should not be seen as anomalies, but rather the norm. You can find another entertaining video displaying the bubbling ferment of national border from roughly AD 1100 to now at: https://www.youtube.com/watch?v=Iha3OS8ShYs

(It should be noted that the dates in the animation are not terribly accurate, and should be taken as a general indication of the era demonstrated by the time-lapse maps rather than a precise year-by-year definition.) 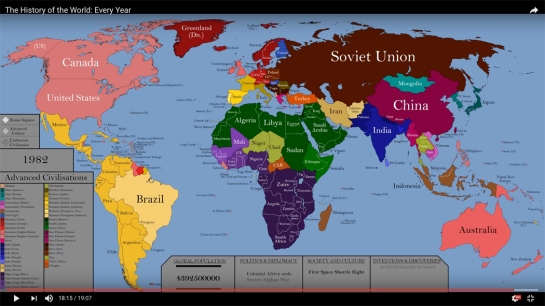 We have talked primarily about Europe, but the same sense of unstable borders and the comings and goings of nations can be seen worldwide. Another video worth watching: https://www.youtube.com/watch?v=-6Wu0Q7x5D0

So when some knucklehead politician tells you that the U.S. should defend its “natural” borders, consider the phantom nature of nationhood and its outlines. The United States itself began as a group of 13 separate nation-states joining together for the common good and soon spread outward and westward, eating up other nations, evicting other peoples and other national authorities, stealing most of northern Mexico and reconstituting that nation’s “natural” borders.

All across the world, there are people corralled inside those lines screaming to get out: Basques and Catalans in Spain, Kurds in Iraq and Turkey, Chechens in the Russian Federation, Russians in Ukraine, Scots from Great Britain, Quebecois from Canada, Tamils in Sri Lanka, the Flemish and Walloons in Belgium, Uighurs in China. Driving around southern France and the Camargue, you will come across angry graffiti demanding Occitan separatism

Nationhood is a dynamic; it is not permanent. Russia is altering the map around the Black Sea and globalization is destabilizing the Westphalian arrangement. Corporations are now transnational, the European Union is subverting ancient sovereignties (with considerable pushback from rising nationalisms) and the post-World War I national borders in the Middle East seem ever more tenuous and artificial. Can the Kurds create their own ethnic state? Can Shia and Sunni ever coexist in a multi-sectarian state?

Instead of assuming that the world cannot change and the Rand-McNally maps we grew up with are the way things should be from now into posterity, we should recognize nations as transient entities momentarily agreed to by whoever is powerful enough to maintain a stalemate.