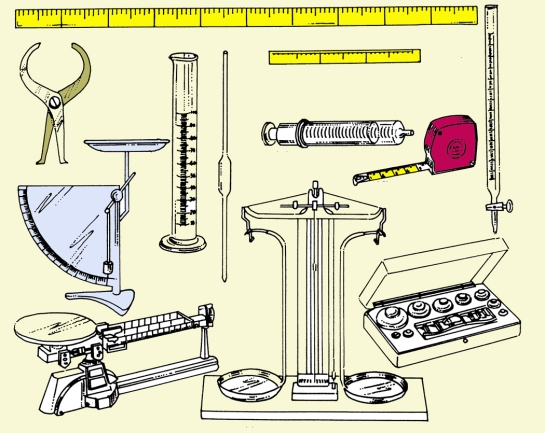 Don’t get me wrong: I believe America should adopt the metric system. There is no good reason for us to go our own way in a world where otherwise a single system of weights and measures works fine for everyone else. America’s failure to metrify costs us a good deal of money in international trade, despite the “soft metrification” that goes on under our noses. (Two-liter Coke, anyone?)

But when it comes to the arguments for adoption, I demur. No, the metric system is not “more logical” than the so-called English system. And in many ways, it simply fails the test for logic, at least if by logic you mean usefulness.

I admit that when it comes to particle physics and engineering, the fact that you can do a good deal of your math by simply moving a decimal point has a lot in its favor. For the very large and the very small: for astrophysicists and nano-technologists, the 10-based metric system is the logical choice.

But I resent the patronizing tone so many pedants take toward the older system, as if it made no sense at all — when in fact, it makes a great deal of sense. There is a logic to the English system, and one that makes our lives easier — and more human.

Just start with the thermometer. When  Daniel Gabriel Fahrenheit invented the mercury thermometer in 1714, he devised his system of measuring temperature in very human terms. Zero degrees was a cold as he make brine before it froze, and 100 degrees was (he was a little off) body temperature.

And using the Fahrenheit thermometer, when it is 0 degrees F, you know it is cold, and when it hits 100 in the shade, you know you’re hot.

The Celsius, or centigrade system that is used in metric nations, is based on the boiling and freezing points of fresh water. Sounds logical, perhaps, but I’m not water, I’m human. Why should it be considered logical to base your thermometer on water?

To make it all just a little more goofy, when Anders Celsius devised his centigrade system, he put the boiling point of water at 0 degrees, and the freezing point at 100 degrees. Yes, that’s right.  That was later reversed to the standard Centigrade (now called Celsius) scale.

The scale, however, is just not geared to the human experience. Is ”in the 30s” in Celsius comfortable or not? In the constricted Celsius scale, the difference from 30 to 39 degrees is the difference between a warm springtime comfort and sweltering summer heat: It spans 86 F to 102 F. In Fahrenheit, it means something to say that the temperature is in the 80s. In Celsius, you don’t know whether to bring a sweater or a bathing suit.

The range of comfort-index for Fahrenheit runs from 0-100. That’s the “centigrade” — or hundred degrees — that counts. That same range in Celsius runs from approximately minus 18 to 38 degrees C. Numbers that do not relate to human experience in any meaningful way.

And it is human experience that is behind other units of measurement in the English system. And the logic behind most of it is found in the ratio of doubles and halves.

If we start with a body part, like a foot or a knuckle, we wind up with length measurements such as the foot or inch. There are 12 inches in a foot, and the division into 12 makes it easy for a carpenter to half that length, or to take a half or quarter inch, or for that matter, a 32nd of an inch.

Yes, you can divide a meter into tenths, but how often do you need a tenth of something, or ten times something, compared to how often you half or double, say, a recipe. Doubling and halving works for things in everyday life.

Sometimes it looks as if there is no logic to the English measuring system, but that is usually because some former measurement has simply dropped out of common usage.

In fact, the system begins, just as distance, with the human body: the mouthful, which is (or was, when it was used) ½ ounce. (The same was also called a tablespoonful.)

Two mouthfuls (or 2 Tbs) equal a pony; two ponies equal a jack; two jacks a gill, and so forth, doubling through the cup (8 ounces or 16 mouthfuls), pint, quart, pottle, gallon, peck, kenning, bushel, strike, coomb, hogshead and butt. You remember Shakespeare’s “butt of malmsey” from Richard III, the final resting place of the Duke of Clarence? That would be 128 gallons of sweet Madeira wine, surely enough to pickle the offending traitor quite comfortably.

It is true that when you look at the many weights and measures in common usage in England from the time of the Norman invasion till the adoption of the metric system, there is a lot of overlap, discrepancy and contradiction. Some doubles and halves are based on units of 12, like the foot, others on units of 16, like the pound.

Then you’ve got fathoms, chains, furlongs, drams, grains and scruples. There is no question but the old system could use a bit of regularization. It’s just that decimalization isn’t a very practical answer, at least for ordinary people in everyday situations.

So, to those who say that decimalization is more “logical,” I say, you are stuck in a provincialism. There are more things in heaven and earth, as they say, and more than one way of logic.

And if I wanted to reverse the direction of the calumny visited upon the old system, all I need to is remind you of the great comedy of the creation of the metric system. It came from a people so blinded by a desire to be “rational,” they came flat up against common sense and the wheels of creation.

It was the “Age of Reason,” and it devolved into bloodshed, terror and ideology. It was the French Revolution, and the revolutionaries were so convinced they had the handle on truth, they were willing to let heads roll like marbles on the schoolyard ground.

One of their reforms was that of weights and measures. It was a preoccupation of the 18th century.

International commerce was expanding exponentially and keeping contracts straight was a problem when the seller was dealing in 12 oz. pounds and the buyer was expecting 16 oz. pounds.

There were some reasonable people: Thomas Jefferson came up with a plan that used a metal pendulum. Since the period of a pendulum’s swing depends on its length, he figured a bar that took exactly one second to swing back and forth would be a dependable standard, with repeatable results. It was an elegant solution. He even suggested calling this new unit a “meter.”

But in France, in the middle of the muddle of the French Revolution, and all its insanity — with an attempt to make the whole world rational — including 10-hour days and 10-day weeks — they came up with their own meter.

In the middle of war with Prussia and Austria, the French revolutionary government hired three surveyors to map the quadrant of the earth from the North Pole to the Equator through Paris. These surveyors were arrested more than once, and by both sides, as suspected spies, as they wandered the war-torn countryside with their transits.

They then decided to take one ten-millionth of that measured distance and call it a meter.

Whenever someone tells me how sensible the metric system is, I laugh, because its origin is as loony as it gets.

Take that 10-hour day, with its 100-minute hours and 100-second minutes. OK. But how about a 10-day week, and a 10 month year? Doesn’t quite match up with the motions of the celestial bodies. Do we repeal the solar year?

When the 10-month year (compromised with 3-week months) didn’t add up to the proper number of days, they capitulated to a 12 month year, with months of three 10-day weeks, leaving the year a little short. The interval between the “logical” calendar and the irrational heavens, was filled with a national religious ceremony celebrating the triumph of Reason.  Parades and ceremonies to the goddess of reason were held.

They also tried to make priesthood in the Catholic Church an elective office.

You simply cannot impose regularity on an irregular universe, and doubles and halves works at the higher mathematical principle of ratios, not of arbitrary measurements. The great cathedrals were built by geometers, working in ratios, not in arithmeticians, working with rulers and yardsticks.

The graces of living come in ratios, not uniformities. Like music: It is the ratios of notes that make rhythm, not their exact durations.

So, is 10 the most logical base? Just imagine music on the metric system. No quarter notes, no eighth notes. Only whole notes, tenth notes and hundredth notes. Talk about white people not having a sense of rhythm.