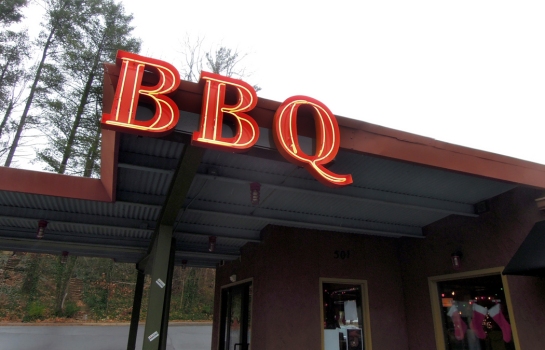 In this week’s New Yorker, Calvin Trillin writes about North Carolina barbecue and the efforts by the only slightly facetious Campaign for Real Barbecue to maintain the traditional standards for the iconic pork product.

He makes allowances for the Great Divide — between Lexington-style and Halifax-style barbecue, that is, between western Carolina barbecue, made with pork shoulder and seasoned with a tomato-based sauce, and eastern ‘cue, made with the whole hog and doused with vinegar and hot pepper. 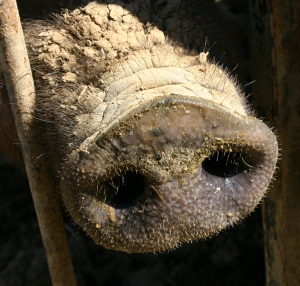 At the outset, I should lay my cards on the table: As a Yankee moved to the South, I came late to the game, but because my first official wife came from Scotland Neck, way out east of Raleigh and Tarboro, I first came to love the stuff the eastern way. (Tarboro, by the way, was home to Ed Weeks, famous in the 1970s for growing record-size vegetables, including a 39 lb. canteloupe and a peanut 3 ½ inches long.) When I ate at Stamey’s Barbecue in Greensboro, I was put off by the sweetish tomato sauce. And without the whole pig roasting on the hickory ash and embers, you miss a good deal of the pleasures of barbecue. I should admit that for those adherents of Lexington-style, the product is more uniform. Only the best and most succulent parts of the animal are used. And for many, that is a plus. But for those of us going whole hog, we miss the bits of gristle we must occasionally spit out; we miss the odd globules of pigfat; and most importantly, the crispy burned bits that are the prize in the Cracker Jack box. “Please ma’am, more crispy bits.”

But I am not here to talk about barbecue, but about its sidekick, the hushpuppy.  We all lament the passing of those things we remember most fondly from our childhood, and I’m afraid that hushpuppies just aren’t what they used to be. 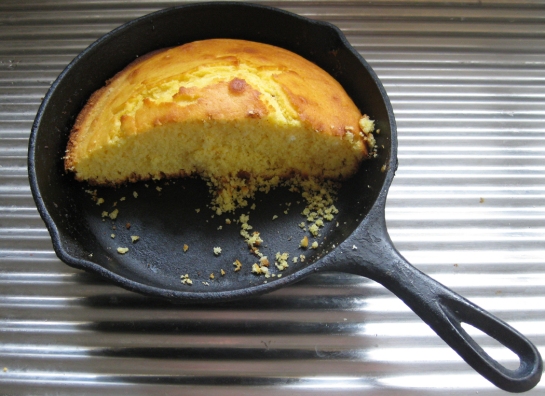 I the South, there are several kinds of cornbread. There is the traditional risen cornbread, made from white cornmeal — usually a self-rising mix, like Martha White’s — made with an egg, some oil and buttermilk and poured into a black-iron fry pan heated to 450 degrees and coated with a layer of scorching bacon grease. The batter sizzles in the grease and when it cooks up, in 20 minutes or so, there is a salty brown crust around the cornbread. You cut it into wedges and butter them up for eating.

My late father-in-law’s favorite meal was cornbread crumbled into buttermilk.

There are also cornbread cakes, in which the batter is fried up on a griddle, like pancakes. Those of us who prize cornbread believe this is the ultimate — more exterior crust, less interior crumb. Butter them up and eat. Great with a mess of pintos.

More humbly, there is pone. This is cornbread without the fancy leavening and seasonings. My first official mother-in-law, from Scotland Neck in Halifax County, used to make the best version, which she called “dog bread.” You have white corn meal, some salt and water to make a thick, doughy batter, dump it into a pan of hot bacon grease and bake it in the oven. I comes out with a great bacon-y crust and an interior texture that can only be compared with a fudge brownie, only savory. You cut it into squares and the luckiest person gets the corner pieces, with extra crispies. You cannot imagine the perfection of dog bread with cooked greens.

Yet, it is the hushpuppy that wins pride of place. You cannot really be said to have eaten barbecue if it isn’t accompanied by hushpuppies. These are deep-fried cornbread tubules, brown and crunchy on the outside, hot and steamy on the inside.

The problem is that tastes change with time and the humble hushpuppy I first knew when I moved to North Carolina in the late 1960s has morphed into some sort of fast food that I hardly recognize.

The original was cornmeal and salt, like dogbread, deep fried. Nowadays, you are hard pressed to find a hushpuppy not sweetened up with sugar and with diced onion added. The old flavor is now closer to a kid’s breakfast cereal.

But this is only part of the problem. Hushpuppies used to be made by gathering up some of the dough on a large cooking spoon and flicking off bits into the boiling fat with the back of a tablespoon. The result was not uniform, but each tapered puppy had ridges along its length that fried up extra crispy. Now, almost every barbecue restaurant has an “extruder” that squeezes out uniform, round-sided football shaped hushpuppies, or worse, has one of those “squirters” like a showerhead that eject a rather loose batter into the fat. You wind up with something more akin to an unformed funnel cake. 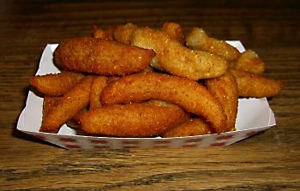 One has to recognize that foods — even so-called traditional foods — evolve, just as language or shoe styles evolve. And it is the Southern taste, defined by customer preference, that has given us the sweetened, oniony, turd-shaped hushpuppy. It seems to be what the people want. But one can nevertheless lament what is lost. And I miss the old, unsweetened, humble, crusty hushpuppy that I first came to love.

It is this way with many of our foods: The barbecue we get in North Carolina — even in eastern North Carolina — is now often made from pork shoulder instead of the whole pig and often it is cooked in an electric or gass oven and not on ashes (although they might throw some soaked hickory chips in for “added flavor.”)

And this devolution isn’t only Carolina or the South. There are people in New Jersey who can countenance Pizza Hut pizza. I don’t know how or why, but they do. And even in Arizona, one can find a line at the Taco Bell. Some people choose that over the taqueria down the street where you can get a real taco de lengua.  You can find Mexican barbacoa, but most people just want chimichangas and ground beef tacos.  It is a certain uniformity and loss of regional preference that has crept into our cuisine and I lament it.