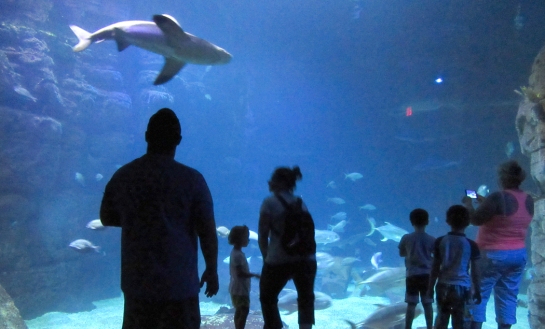 I can hardly pass a public aquarium without going in. I love them. But when I watch those finny torpedoes bolting about in the water, it raises in me two very different reactions.

First, those creatures are delicious. Paired with garlic and butter, you have shrimp, lobster, mussels, scallops, trout. Is it any wonder when I visit the aquarium, I get hungry?

I see them swimming around or crawling on the bottom, and I am like a hungry Mack Swain in The Gold Rush looking at Charlie Chaplin and seeing a great chicken, ready to pan fry. Those salmon, flashing silver in the watery sunlight — I see them pink on a plate, with some roasted potatoes and asparagus. And perhaps a nice chilled Gerwürtztraminer.

When I lived in Seattle, I had a membership in the aquarium on Pier 59, and often when leaving, I would wander down to Pier 54 to Ivar’s Acres of Clams to satisfy the anticipation I had built up watching the wee beasties behind glass. Alder-smoked salmon was the perfect completion for a visit to see the silver-sided fish, catching the light like the shiny metallic jets built just north of town by Boeing.

But the second reason to visit aquariums is for the meditation. Watching the beasties gliding through the aqueous brine lets the mind float as well. I sit against the wall before the large, main tank, and watch, hypnotized with the same fascination one has before a campfire — fish for chispas.

I am considering modern aquariums here. It used to be that — much as zoos used to be cages with iron bars — aquaria were ranks of small fishtanks along a wall and you would move from one to the next to see which individual species was featured there. But now, like zoos having built “natural habitats,” modern city aquariums are immersive experiences: huge tanks with either a plate glass window the size of an Imax screen, or a transparent underwater tunnel that lets you watch the underside of sharks as they waggle over your head.

The grandaddy of them all is the Monterey Bay Aquarium in California, with its giant kelp forest. The Seattle Aquarium is my second favorite. There are notable aquaria in Baltimore, Boston, San Francisco, New Orleans, Tampa, and Charleston, S.C. There are even aquariums in the desert or up in the mountains: The Shark Reef at Mandalay Bay in Las Vegas, Nev.; the Denver Downtown Aquarium in Colo.; and Ripley’s Aquarium of the Smokies in Gatlinburg, Tenn. The biggest of all, with 10 million gallons, is 1000 feet above sea level in Atlanta. 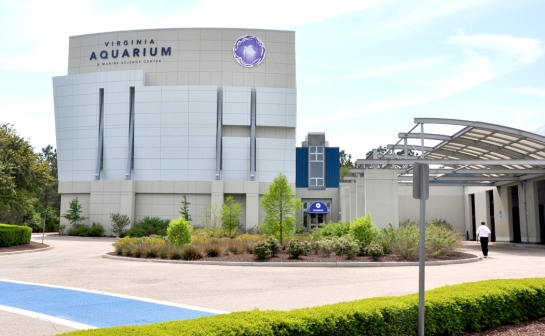 A week ago, I spent a day at the Virginia Aquarium and Marine Science Center in Virginia Beach, Va. It has grown fourfold since I lived in the Tidewater region 30 years ago. It is a vast complex, mixing mega-tanks of fish with smaller educational exhibits and hands-on stuff for kids. And there were lots of kids. Yelling, screaming, running, falling, crying, laughing. I could find a seat along the back wall in one room or another and watch the fish. The children seemed to cluster at the shark tank, leaving the other, smaller exhibit to me and a few adults. I could sit for hours and watch the piscean floorshow.

There are smaller tanks, like the one with the horseshoe crabs. Another has ancient deepsea fossils, and you see how, across time, life changes, and stays the same. The trilobite and the horseshoe crab are clearly cousins. 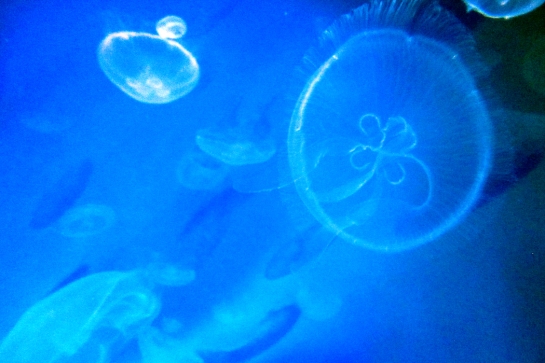 The most oneiric tank is the one with jellyfish. Those slow, meandering medusas, pulling tight, then relaxing to propel themselves aimlessly through the fluid universe are a kind of mantra, inducing that state of mushin no shin (mind without mind) that Zen philosophers aim for. It is a state where you clear your thoughts of all idea, and only feel the slow rhythm of the jelly — the rhythm of the cosmos before words were invented to sidetrack us.

It is a state without ideology, without past or future, without expectation, without regrets. It is a state closest to the Biblical name of the deity: “I am that I am.” And for the minutes you stand in front of that backlit tank, with your mind detached from your body and floating along with the jellies, you are one with Creation. Then, of course, a gaggle of children shunts you aside and giggles as they watch the caps and tentacles before moving on to the next tank, or to the sharks — and the connection with the All is snapped. You may try to reconnect, but the mood is broken.

So, you move on to the next exhibit. For me, that is the large tank with the bony fish, which dart this way and that in seeming random patterns. But you watch over a span of time, and you begin noticing choreography. The fish form groups, the groups connect, disjoin, and then connect in new ways. 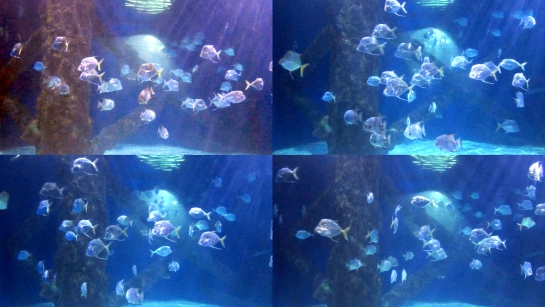 It is very like the group movements of a Balanchine ballet, where several groups of three shift into groups of four before redefining themselves as a line, then opening into two circles and then into pairs twirling away in groups of three again. The counterpoint of movement is what makes Balanchine so distinctive, and so profoundly moving.

And these hatchetfish do the same in the water, three this way, four that, a shoal becomes broken into individuals. They dart from this side of the stage to that with such grace, that tears come to my eyes.

I’m afraid the normal aquarium-goer, like the visitors to art museum, spend little time with each exhibit. Mostly they pour in, point at the sharks or the mantas, perhaps look at the labels beside the glass to name which kind of shark they see, then move on to the next tank. To reach the Zen state I am after requires patience: sitting still for quarter- or half-hours at least, trying to empty your head of thoughts, just becoming one of the fish in the watery universe, until the water no longer exists and it is all universe. 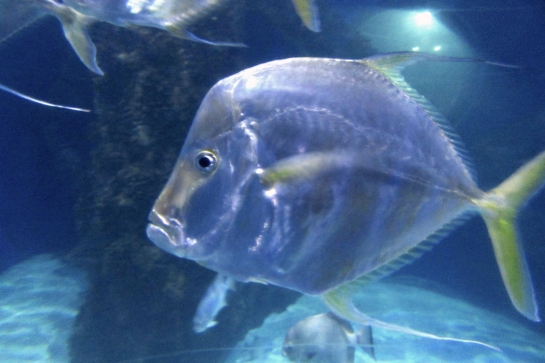 Others attend church to feel this, or take up yoga classes, or go driving aimlessly on rainy nights. Without occasionally refreshing your life by entering this state, I don’t know how anyone could bear the weight of the world.