Even when they stand before us stark naked, the only part of their anatomy that matters is their eyes, which hold us paralyzed in their gaze. They are mirrors of infinite sadness.

One of the perennial sellers among photographic books is Nan Goldin’s Ballad of Sexual Dependency, a woeful tale of the underbelly of the art world told in a series of primitive color photographs full of battered women, tattoos, transvestites, pimps, drugs and hangers on.

They look out at us, bruised and lost.

Over a period of 40 years, but primarily in the 1980s, Goldin has photographed the beaten underside of la vie de Boheme — the art world and the pretenders to the art world, the gay world, the broken and wounded, the young who have found what they are looking for in being lost.

And it is an impressive accomplishment. Some 700 photographs, each an intense shot of emotional cocaine, are accompanied by music, ranging from blues to heavy metal to opera.

Goldin has photographed this subculture from the inside. She bears no objectivity: These are her friends and lovers.

“I don’t choose people in order to photograph them,” she has said. “I take photos straight from my life. These photos come from relationships, not from observation.”

The pictures are raw, like snapshots, and the life is even more raw: They love, shoot drugs, party, cry on each others’ shoulders, smoke Marlboros, dress up in costumes and search for — and intermittently find — meaning. More often, they find pain and suffering. And in the age of AIDS, they also find death.

These are people on the edge, their nerves raw from abrasion. For them, “unprotected sex” is spiritual as well as physical: Their souls are wide open and vulnerable.

The photographs at first appear nothing more than snapshots, but the cumulative effect of 700 of them proves that Goldin is instead a rare technician, able to create the effect of spontaneity and carelessness at will. The figures’ motion shows as blur in the pictures, usually lit with the garish glare of the flashbulb. The colors of the pictures are the brightest Kodachrome blues, greens, violets and golds. Goldin has created a style perfectly suited to the subject matter.

The faces are both pathetic and heroic. The young bohemians, living in squalor, clearly see themselves heroically, participating in grand love affairs, where violence can easily be confused with passion and romantic dreams can comfortably ignore their rat-infested surroundings. It is cold water flats with concrete floors, soiled sheets and nose rings.

Which gives them a certain nobility: They know they are alive.

Most people have seen the photographs published in book form, but Goldin didn’t intend the series as a book. It was first a slide show that she dragged around the New York art world in the 1980s, showing in night clubs as well as galleries. It is meant to be accompanied by music, which is missing in the book. The music is as important as a score to a film.

The show, which takes 45 minutes to sit through, is not endured by many museum goers when it has been shown at major museums, most of its watchers come and go after seeing a minute or so of the presentation.

And its intensity does make it hard to sit through.

But Goldin manages to keep it all coherent, scripting the show in smaller bursts of slides grouped thematically, or as an episode in a single love affair.

Because she makes you see the flow from one slide to the next, it never becomes the interminable horror of a neighbor’s travel pictures. Unless your neighbor is Dante.

Yet, it isn’t quite hell, either. It is relentlessly romantic. Goldin is never the outsider, seeing the pain and filth and commenting on it. She is instead an avid participant, able to play-pretend with all her other subjects that she is in the middle of some grand opera of love and passion. 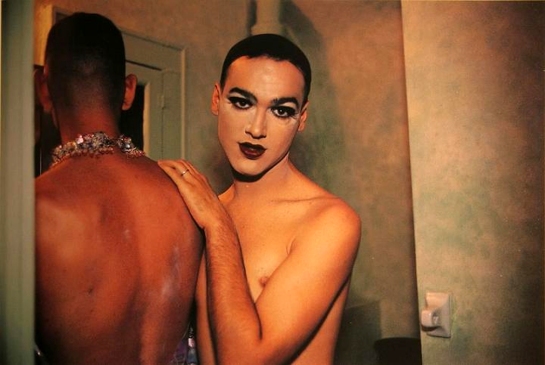 And while at some level she must recognize the ugliness, she is no moralist, presenting shocking scenes in hope we will pass laws or enforce a social code. Lewis Hine she is not.

No, she gives us a layered, complex vision of her world that alternately repels and attracts. She makes us want to give in to the romantic illusions, but the bruises on her face brutally contradict them.

Indeed, Goldin is a major participant in the story she tells. She appears in a large number of the photographs, including the climax series, wherein she sustains the abuse of a boyfriend and wears the black eye he gives her.

But this is never a tract about domestic abuse: Goldin clearly takes responsibility for her own actions. She is willing to trade being terrorized for the drug rush of romantic obsession.

This is la vie boheme in the age of AIDS and crack cocaine, and Goldin is its Puccini.

And that is the key to the success of these photographs as art. We do not need to live in rat-infested cold-water flats like Goldin’s subjects, but we do need to know we are alive.

It is the primary duty of art to reacquaint us with the fact.

Daily living takes the edge off life for all of us. Habit and conformity dull our senses. We may feel more mature and less reckless than Goldin’s druggies and transvestites, but if we are honest, we also must admit that what we call maturity is too often composed of equal parts of cowardice and exhaustion.

Goldin’s people risk everything, even death, for the rush of feeling alive.

In that, they are like the Medieval stories of Tristram and Iseult or Launcelot and Guinevere. Our notion of romantic love had its beginning in these stories of adultery. For the sake of their passion, the lovers accepted not only death, but the eternal damnation they believed would follow. The assumption of such stories was that transcendent experience could not be found in the routine, in the sanction of society; it must be found outside the rules. A life lived only by rules is a mechanical life; authenticity is found only by acting from the purest impulse.

It is a grand and romantic notion.

But we were not asked then to become adulterers and we are not asked now by Goldin’s work to go out and score a bag of heroin. Art must be understood metaphorically, not literally. The message we learn from both the Medieval and postmodern is that life requires risk, that any risk less than all doesn’t count.

So Suzanne, Cookie, Siobhan, Claude and all the rest of the recurring denizens of this demimonde, including Nan herself, who is a principal in her own opera, throw themselves into relationships — into experience — with a foolhardy disregard for their own self-preservation.

When I call this impulse “romantic,” what I mean is that it attempts to connect with those things larger and more eternal than a smooth running society. It tests the limits rather than acceding to them.

When you see something like Goldin’s pictures, you begin to understand some of the attraction of the life with its unmade beds, dirty drinking glasses and cigarettes extinguished on the rug. Perhaps you or I would not like to live that way, but there is an underlying romanticism to it: They are not living the quiet, safe world of their parents. It is a life taking chances, living on the edge, a desperate chance for transcendence.

So, the women risk beatings by their boyfriends and the men risk thrashing by their drug dealers, all in the name of feeling overpowering emotions and not giving in to what they see as the gradual death of conventional living.

For the secret romanticism, whether it is Nan Goldin or Percy Shelley, is its aspiration to transcend life’s limits. Nothing should be forbidden and the only thing worth doing is what is impossible.

There is a wonderful scene in William Blake’s Marriage of Heaven and Hell. An angel brings the poet to a precipice and from their height, they look down on “the infinite abyss, fiery as the smoke of a burning city; beneath us, at an immense distance, was the sun, black, but shining; round it were fiery tracks on which revolv’d vast spiders, crawling after their prey, which flew, or rather swim, in the infinite deep, in the most terrific shapes of animals sprung from corruption.”

On being told of this vile place, the poet innocently suggests, “if you please, we will commit ourselves to this void, and see whether providence is here also.”

Much of what passes for art in any age merely keeps us lulled: Pretty pictures or numbing farces. People call for beauty, but what they really ask is for an anodyne: a buffer between themselves and the difficulties of being alive. 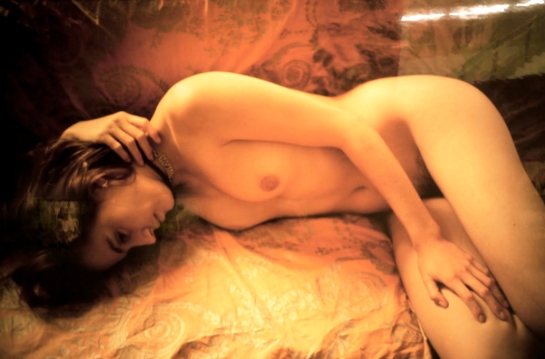 But if we risk feeling alive, we must remember that to be alive is to suffer. Americans sometimes like to forget this fact; we live comfortable lives, insulated from the hard certainties. We kill to eat, although we never think of the slaughterhouse when we buy our burger; we grow old and die, although we spend billions on cosmetics and plastic surgery to deny the inevitable. Our love cannot protect our children and our best intentions cannot prevent us from hurting others.

But as Krishna taught Arjuna in the Bhagavad Gita, one must recognize the universal tragedy and still act.

And, like Nan Goldin’s art, manage in the face of suffering and death to say “yes.”