Who is America’s greatest painter?

There are many who could be named, from Eakins to Homer to Whistler to Pollock, but the name I would like to place in nomination is John James Audubon.

That comes as a surprise to me as well. I once knew him, as most Americans do, as the author of a book of overly familiar colored engravings of birds.

But the original watercolor paintings reveal him to be a soul of great emotional power, even moral force. An exhibition of many of them is currently on view at the New York Historical Society, through May 19, and changing shows continue through 2015, until all of the 474 originals for his book have been displayed. (A stunning book, “Audubon’s Aviary,” is also available through the NYHS or Amazon).

Audubon — America’s most famous Haitian immigrant — was born there in 1785 as the illegitimate son of a French merchant and slave trader. He moved to France with his father when he was 5, and to the United States when he was 18.

He went through a series of disastrous business ventures, making and losing several fortunes and wound up, at 35, as a part-time taxidermist and portrait painter.

It was then he conceived a plan to publish a book about American birds with his paintings as illustrations. Audubon had been a nature lover since boyhood and had often drawn the birds he loved. It came to him that these drawings could be supplemented to illustrate all the bird species then known in America. It was an ambitious plan.

Too ambitious, as it turned out, to interest any American publisher, so he wound up in England, where he found Robert Havell Jr., an engraver with the perfect talent match for Audubon’s drawings.

The book they published in installments over a dozen years beginning in 1827 was the ”double-elephant edition,” named after the page size: 29 1/2 by 39 1/2 inches, with engravings by Havell made from the paintings of Audubon and hand-colored by apprentices.

They sold by subscription for $1,000, an astronomical sum in those days. It is hard to compare dollars over centuries, but at the time, the average laborer made the proverbial dollar a day, so it would not be out of line to say they sold for the equivalent of about $30,000.

In Dec., 2010, a complete first edition of “The Birds of America” sold at Sotheby’s in London for $11.5 million — a record for the most expensive printed book ever sold at auction.

Over three decades, Audubon tracked down, studied, shot, drew and painted more than 400 of the country’s bird species, with the paintings turned into a book that would document them for the first time, and eventually make its author’s name synonymous with nature and conservation.

And he did so with a commitment so intense that he became one with his subject. In some sense, every bird he painted is a self-portrait.

More than anything else, it is for this reason they rise above documentary art to become among the greatest art ever made by an American.

But it was the book Audubon meant us to see, not the watercolors. They were painted only as studies for the engravings that illustrate the book.

And so, Audubon felt comfortable doing things he would never do for a display picture. He mixed media like crazy, using ink, watercolor, gouache, pencil, even collaging birds scissored from earlier drawings.

He used each of these techniques to particular expressive ends that could not always survive the engraving transformation. In the case of the Magnificent Frigatebird, for instance, he used the sheen of his graphite pencil over the top of watercolor to imitate the iridescent effect of the bird’s plumage. 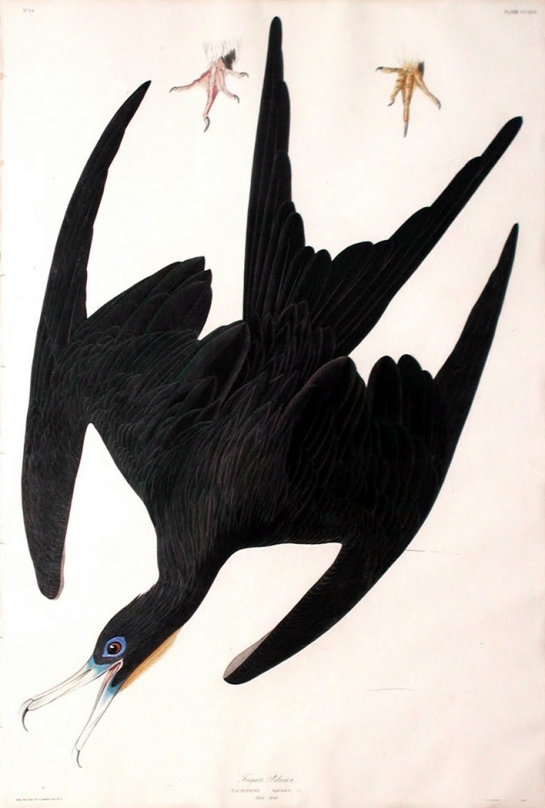 Still, the very first thing that wallops you as you enter the Audubon show at the Art Institute is the monumental size of the paintings.

Everybody knows what Audubon’s bird pictures look like, or at least they think they do. But seeing poor reproductions in books will not prepare you for the real thing.

What we are used to seeing are small reproductions of large engravings that are themselves reproductions of Audubon’s original paintings. Each painting is about 2 by 3 feet. Poster size, not postage-stamp size.

In that giant space, Audubon places all his birds. It was his intention to paint every bird life-size, whether hummingbird or eagle.

It meant that very large birds, such as flamingoes or condors, had to be contorted to fit into the space.

Yet it isn’t mere exigency that causes Audubon’s animals to be so animated. More than anything else, it is his total body identification. He is one of the world’s most haptic artists.

Over and over, you sense that Audubon felt his own muscles and sinews moving in sympathy with the birds he drew.

Time after time, you can see the intense life reflected in the eyes of his birds. They are never mere circles, but always pools of living awareness.

One of his secrets may be that he remained always a child in his direct response to nature.

”Every child is an artist,” Picasso said. ”The problem is how to remain an artist once he grows up.”

It was a problem Audubon solved.

Look at his poses. The competency of the drawing is a different level from a child’s but the poses are straight out of first or second grade. The animal is always moving and live.

Naturalists have always carped that the Audubon bird prints are not as realistic as those of Louis Agassiz Fuertes or Roger Tory Peterson. They cavil that Audubon poses his birds in exaggerated positions that are unnatural for the real bird when alive.

But these people are not letting Audubon be Audubon. While it is true that he was on some level making identification pictures, it isn’t that level that rises to greatness. It isn’t as a field guide he is to be judged.

Audubon watched his birds with the minute carefulness of a mother bird, and recognized in every bird action an analogous human emotion. He then projected the human back into his avian. Like the leader strike of lightning that makes a path for the great burst of electricity back in the opposite direction.

Fuertes is more useful scientifically precisely because he treats his birds as an ”it.” Audubon treats them as a ”thou.”

You can see it in his Chuck-Will’s-Widow with its giant gaping mouth, the essence of appetite. In the uxorial affection of his Passenger Pigeons, which almost seem to kiss as the one feeds the other. In his nesting Barn Swallows, where the one shields the other with his upraised wing.

Ultimately, Audubon’s paintings are not about birds, but about human beings. Where Bach or Beethoven uses a series of notes to convey a human emotion, Audubon used a picture of a bird. And more than anything, it was that Audubon felt the importance of paying attention.

It isn’t that his paintings are so detailed, but that he paid attention to that detail with an urgency that approached love.

”To be awake is to be alive,” wrote Henry Thoreau. ”I have never yet met a man who was quite awake. How could I have looked him in the face?”

But to see the preliminary studies Audubon made for his “Birds of North America” is to see the work of a man wide awake and with his abilities at full throttle.