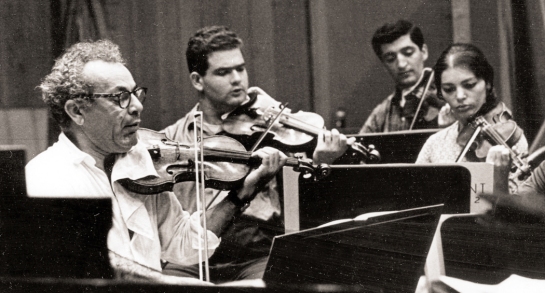 This comes more than 50 years late, but I need to thank Lauren Goldstein. Laurie was my high school girlfriend and she gave me one of the most important gifts of my life.

Sometimes it takes a while for a gift to become clear. Even to know that it was a gift. Its impact can accumulate over an entire life. I am now 71 and for the past 50 years music has been central to my existence. As Nietzsche once said, “Life without music would be a mistake.” And Laurie gave me the music and my life has not been a mistake.

There was almost no music in my house when I was growing up. The most we heard was probably watching the Perry Como show on TV. For most of my childhood, there was no phonograph, no guitar, no sheet music. Eventually, there was a Lowery organ and my mother would sometimes play by ear. She was quite talented, but only sat down at the keyboard maybe once a year, maybe once every two years.

My brother and I took lessons briefly, but we didn’t practice and, frankly, it seemed like homework. The major cultural influence in our house was television. It was that bleak.

But Laurie changed all that. She was a musician. And not just a girl playing glockenspiel in the marching band: She was a bassoonist taking lessons from one of the world’s great bassoonists. She also played piano with grace and style.

I, of course, was just a pimply-faced kid, a high school junior when we started dating. For the next year and a half, until we grew apart as we went off to different colleges, it was a graduate course in music for me.

Laurie was studying with Loren Glickman, the bassoonist who plays the high-pitched, incredibly difficult solo on the famous recording of The Rite of Spring conducted by Stravinsky himself. He also plays the beautiful bassoon part in Stravinsky’s recording of his Octet for Winds. Laurie and I went to several concerts to hear him perform. I still remember his Mozart concerto distinctly — he played with more rubato and freedom than is usual. It was a delight. It wasn’t just a collection of tunes, but rather, it had meaning.

But it wasn’t only Glickman. We went to many concerts together, especially the New School concerts given by violinist Alexander Schneider and his pick-up ensemble. I can still name many of those tremendous musicians who played with him: Leonard Arner, Charlie Russo, Robert Nagel. They all went on to become the core of New York’s Mostly Mozart series. Those New School concert tickets were $3. We could afford them. And on Christmas Eve, we went to Carnegie Hall for Schneider’s annual concert. It was a rich education for the ear. Family complained I wasn’t spending that time with relatives, but I certainly felt closer to the music than I did to the clan.

Schneider was an especially intense musician, he would sit in his concertmaster’s chair to lead the orchestra and wrap his right leg around the chair leg like a snake on a caduceus, as if to anchor himself as he leaned forcefully into the music. As the twig is bent, they say, so inclines the tree, and this early exposure to the Schneider brand of music has informed my entire subsequent life in listening. There was a take-no-prisoners attitude to Schneider’s playing that told me music was not merely entertainment, but truly serious business.

He was most famous as a member of the Budapest String Quartet, but I knew him in New York leading concerts and playing his fiddle. He made precious few recordings that are still available, but the best is a series he made with his own group, the Schneider Quartet, of the Haydn quartets. It was supposed to be all of them, but money ran out and they managed to record 53 of the more than 80 quartets Haydn wrote. The set is still a monument, not only to Haydn, but to quartet playing. I would not be without this set, which is still available, nearly 70 years after they were recorded, now on CD.

Laurie and I would sit on her couch at home and make out, high-school style in that gentler age, with Stravinsky playing on the phonograph, or La Mer or Beethoven’s “Tempest” sonata. Once, her uncle Bucky came over and Laurie accompanied him on piano as he played a Beethoven violin sonata on his Geige — admittedly a squeaky and sour version as only a heedlessly self-confident amateur could manage.

As I thank Laurie for this gift of music, I need to express my gratitude also to her mother, Esther, who nurtured my nascent interest. She seemed to see something in me that no one else did and encouraged me to follow art and culture. She also gave me a huge pile of old 78 rpm records from her own youth. The day of the 78 was quite past, but all record players still had a setting to play them.

Among those recordings are some that are still the ur-performances for me: Artur Schnabel playing Beethoven’s Fourth Concerto with the Chicago Symphony and Frederick Stock; William Kincaid and the Philadelphia Orchestra playing the Telemann Suite in A-minor for flute and orchestra; Alice Ehlers on harpsichord playing Bach; Rafael Puyana playing the De Falla Harpsichord Concerto. Leo Slezak singing Schubert’s Erlkönig, Ungeduld and Heidenröslein. I played them over and over. There must have been 50 discs. Among them, I first heard Brahms’ Second, Beethoven’s Fifth and Sixth (the latter with Stokowski and Philadelphia), Bach’s Brandenburgs, and Weinberger’s Schwanda: Polka and Fugue. It was an eclectic mix.

It was a revelation to see an entire family for whom art, music, literature were not only central, but a vivifying force in life. For whom culture created meaning.

So, when I went off to college, I may have majored in English, but I minored in music, learned to read scores and harmonically analyze them, studied (rather pathetically) piano and listened to every recording I could get my hands on, spending all my spare cash on Nonesuch, Turnabout, Vox, Seraphim and Crossroads LPs — they were the cheap labels.

Later in life, many of the concerts I went to were among the most signal events for me, deepening my psyche and opening new worlds of emotional response. Along with that came opera and ballet, theater and film, these were the “lively arts,” and gave me a living. I eventually became a classical music critic for a big-city daily newspaper.

Laurie Goldstein and me, prom 1965

As for Laurie, when she graduated high school, she went on to study with Bernard Garfield, the long-time first-chair bassoonist with the Philadelphia Orchestra. She became a respected professional and played for and recorded with composers as widely different as PDQ Bach and Philip Glass.

If it had not been for Laurie, I don’t know if I would have been introduced to classical music. I’m sure I was bound to enter a life of art and intellect somehow, but for me, music is the heart of it all. I love visual art and literature, but if I had to lose a sense, my hearing would be my last choice. I cannot imagine life without the Beethoven quartets, the symphonies of Haydn, the operas of Mozart. Or the music of Schoenberg, Bartok, Shostakovich or Barber or Glass. Or Ellington or Coltrane, or the Beatles. Music fills my insides and makes me more human.

Thank you, Laurie. Thank you.