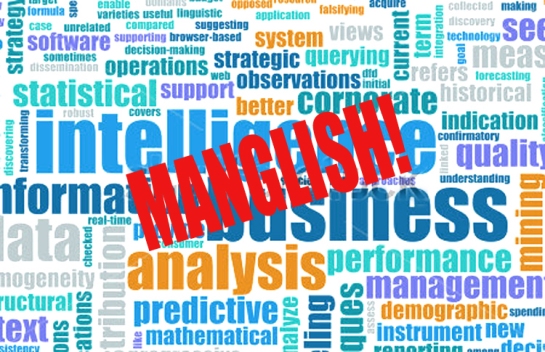 I made my living with words, and whenever my corporate overlords sent us mere workers a memo, I cringed. Because, if I wrote the way they do, I’d have been out of a job.

Recently, as newspapers face doom, and their CEOs try to figure out how to stay afloat, the memos they have sent have become increasingly divorced from reality. We hear a lot about “content monetization” and “content platforms,” but precious little about “content.”

It has probably always been true, but the fact is, the corporate world has a language all its own. It is a kind of “management English” that I call “Manglish.” The implied fragrance of “mangle” is not a coincidence.

This hit me profoundly once as I sat in on a meeting of business people who volunteer in the arts.

According to Manglish, one never plans anything, but rather ”sets in motion the long-range planning process.” I heard one panel member say she wanted to ”micro into the epicenter.”  Another mentioned ”infrastructures in different configurations partnering with organizations to improve our base of communication.”

There was ”the question of an inheritor is a second-tier question” and ”I just want to expand on that follow-up.”

It ”interfaces” and ”synergizes” and generally obscures the agent in favor of the passive voice – ”mistakes were made” is the most infamous example.

It can stretch simple words into rococo phrases – or rather, phraseologies – and it absolutely Osterizes metaphors. Somehow an ”umbrella organization” can have ”legs,” but ideally it should ”sunset” itself.

One explanation for the wordiness of Manglish that I like posits that it allows the speaker to fill the ether with words while giving him time to figure out what he wants to say.

But most plausibly, in the corporate world — where these volunteers spend most of their lives — if you are going to give a million dollars to someone, you want to know you can trust them, that they will know what to do with the money and won’t blow it all, like an artist might, on tinfoil and licorice.

So, the Manglish speaker actually uses his lingo as a shibboleth, letting others in his business-government circle know that he can be trusted for he ”is one of us.”

Artists do that too with their own bizarre lingo. Rock musicians do it, carpenters do it. Lord knows, journalists do it.

There is a particular place in Hell for purveyors of academic art criticism.

Reading most art criticism is like eating an old mattress.

A case in point is the impenetrable mush written by the author of the one exhibit catalog. I don’t wish to name her, because she may have recovered the use of her tongue.

One prime section reads: ”It shared minimalism’s insistence on easily graspable gestalts that were reductive in their geometric simplicity and total non-referentiality.”

The next sentence is almost as funny: ”But, paradoxically, minimalism shifted the emphasis from the autonomous artwork to the environmental context and the act of visual apprehension.”

Anyone have a shovel? Surely this can be said in plain English.

But the fact is, whether it is academic mush or corporate Manglish, it is language that businessmen, bureaucrats and academics understand and is mutually intelligible to them. But to the rest of us, it might as well be Finnish.

I say this not to make fun of Manglish, although it is often a hoot, but to point out that the corporate people who provide the money for arts organizations and the artists on the receiving end tend not to speak the same language. Artists have their own dialect, and it is just as opaque to the non-artist and often just as full of hot air.

Thank God the managing directors of theater companies and symphonies are bilingual. After years of talking with museum directors and artistic directors, I have come to have a deeper appreciation for their ability to listen with one ear to the jargon of the artist and with the other to the lingo of the banker and meld them together to create an organization that makes good art and survives doing it.