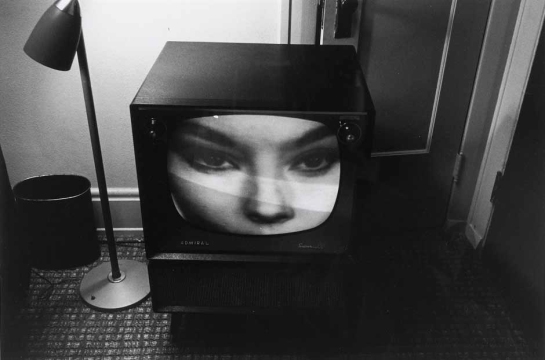 TV is an odd medium, that is, if it is a medium at all.

I have been trying to understand my dissatisfaction with the box, and come to terms with why, despite watching regularly, I feel so empty afterwards.

First of all, it isn’t a question of the quality of the programing. While it is unarguably true that most of the stuff on TV is dreck, there are examples of quality. The Simpsons, for instance — which I think will eventually be compared quite favorably with Shakespeare — or Book Notes on C-Span.

Yet, when I turn off the box, I feel like I have just eaten a boxcar of Cheez Doodles, and am more than a little queasy.

And I need a spiritual Bromo Seltzer.

One of the issues is, I believe, that TV is different from other media. If TV is a medium, it is one that is already twice-removed. That is, television isn’t, in itself, a medium for ideas or images — a conduit for content — but a medium of media.

That is, a play can be seen as a medium for words and ideas, but television is a medium for plays: What we talk about when we discuss television isn’t TV, but the plays, or discussions, or documentaries, or stand-up routines that are carried by TV.

In that sense, it is theater we are critiquing when we complain about bad sitcoms, not TV per se.

Almost anything that appears on TV is really some other medium, carried at the second remove, over the airwaves and into our houses.

This second-handedness of television is one of the things that bothers me about it most.

I see the consequences of a TV-based culture constantly, when young people quote old sitcoms for wisdom — as if the Brady Bunch were relevant to anything.

And now, with the pervasiveness of the box in our culture, we look to the second-hand image in preference to the the actuality: Nothing is accepted as real until it is validated by being shown on TV.

Like a bunch of people at a bar in New York, when a car crash occurs right outside and the customers watch the wreck on the TV over the bar, covered from local TV helicopter cameras, rather than look out the window. An image on TV now seems more real than the actuality.

This second-handedness of television means that audiences often make no distinction between seeing a movie in a theater and seeing it on a 26-inch screen.

What is missing is the actuality of the event: For animals smell; their fur has a feel under the hand that TV cannot give us.

Cops spend a lot of time filling in paper work and waiting for court appearances; TV requires the chase.

And seeing a movie includes the visual density of a projected image, which is gutted by the low-resolution of a TV screen.

We build our lives from our experience. If our experience is already second-hand, our lives cannot be fully realized. There is a “nowness” — an actuality and presence — to real experience that cannot be duplicated on the box. I worry that educators show videos of cows in class of rather than taking their students on a class trip to a dairy. What you learn from the video is second hand. What you learn from an actual dairy enters that deep well of experience we can draw from for the rest of our lives. What is lost on TV is that 360-degreeness and three-dimensionality — the smell and grit — of reality.

It also, by its rapid image editing, cuts us off from the important possibility of learning through slow accumulation of detail. In TV, nothing is slow, and there is no detail, only a quick wash of effect.

So, if television cannot give us a meaningful experience, and is only a second-hand medium of media, giving us images of theater and music, what is essentially television?

What can we say about television that isn’t mistakenly critiquing the drama, or the discussion, or the music that is conducted through the box into our living rooms?

This, in addition to the medium’s second-handedness, is what really bothers me:

The actual TV-ness of the box can only accomplish two things.

TV can only make something look attractive, or make it look repellent.

The images that TV gives us cannot make political arguments, it cannot discuss issues, it cannot weigh difficult moral questions. That is the lesson we first widely learned during the Nixon-Kennedy television debates, when Kennedy smiled and Nixon glowered. Many listening to the debates on radio assumed Nixon had won. But on TV, Kennedy glowed and the box gleamed in response.

As a result, political campaigns now rely not on actual debate — no one who really understands the term believes the so-called TV debates are anything of the sort — but the presentation of images making “our guy” look heroic and “their guy” look like an oaf.

And this leads to the natural result of TV’s “attraction-repulsion” duality.

Television is ultimately the final and natural home of the commercial, that glossy dreamlike presentation of images of the libido, really well lit and set into a mythology of personal gratification.

In one way of defining the term, television is at its heart pornographic.

I don’t mean that it is filled with sexual imagery, but that the pictures on television short circuit complex reactions and substitute simple desire. Television is the ultimate “me see, me want” medium. It makes us want to possess those images it glamorizes. We are not meant to think about, feel deeply or discuss the ideas, but only to want the images. That is what I call pornographic.

In this, the programing is not substantially different from the commercials: We want the smiles and lifestyles of our TV Friends, and the clothes they wear on Sex and the City.

It is a world of pure fantasy, devoid of consequences, complexity or depth. It creates a world in which everything is an “it,” in the terms of Martin Buber.

That objectification of the world is the bottom line on pornography. And when we combine the problem of TV’s pornographic essence with its displacing actual experience, we wind up with a deep metaphysical tummy ache.

Which is why I really need a Bromo.