You cannot walk five feet in the South without knowing there is blood in the dirt.

It gives July 4 a special meaning, for you know that no matter where you turn, there is history under your foot.

There is history elsewhere in the country, too: Bunker Hill, Mass., Fort Ticonderoga in New York or Tombstone, Ariz. But they are singular places you go to visit — somebody else’s history. The South is so full of history that its land and people seem buried under the sense of it.

The first democratic legislature in the New World was Virginia’s House of Burgesses. The author of the Declaration of Independence was a Virginian. And the Revolutionary War came to a close at Yorktown, Va.

Each state has its Civil War sites, where thousands of its men are buried.

There are the street corners where civil-rights workers were hosed and beaten by police. Cotton fields where slaves were whipped.

It is interesting that the one place in the country where Black and White share the most is the South.

For most Americans, history is a story told in a schoolbook. It seems removed from the lives we live. For most Southerners, history is something their grandparents did or was done to them.

It isn’t just that the Civil War raged over the landscape. No part of the United States has suffered so much warfare on its land.

There had been battles with Indians from the very first European settlements.

The Revolutionary War brought Gen. Nathanael Greene to the South, where he led the British on a wild goose chase. The South also was the stage for Francis Marion, called the ”Swamp Fox.” Towns are named for them throughout the South.

The War of 1812 brought Andrew Jackson to fight with both the British and the Creek Indians.

The Mexican War helped bring Texas to the South and later to the Confederacy.

And, in the meantime, the blood of countless slaves and freedmen enlarged the tragedy of the South. There were lynchings and later the violence of the civil-rights movement.

It isn’t only rancor and slaughter that give the South its sense of history, but the land itself.

You can stand in a cornfield in rural Sprott, Ala., 25 miles north of Selma, and see the stand of trees at its border, knowing the trees are no more than 60 years old. And that before those trees began filling in the countryside, there were cotton, sharecroppers and poverty. A dilapidated wooden shack sits in the middle of the woods, and you wonder why anyone ever built there.

Then you recognize they didn’t. The sharecroppers’ home — just like those written about by James Agee in his Let Us Now Praise Famous Men of 1941 — was built by a cotton field, but times change and history presses on and the fields are now woods.

I have lived in the South for the better part of my life. Every town, every pasture, every street corner brings to mind details of what they call ”The Great War.”

The library in Greensboro, N.C., where I lived, was a wartime hospital. In Madison, N.C., where my wife grew up, the family names of the wealthy whites and the poorest blacks were often the same, a legacy of slave times. The constant presence of the Civil War in the South crosses color lines.

In most other regions of the United States, the Civil War is something you read about in a book. In the South, the Civil War is now, a perennial now. A Southerner’s perspective on the war is personal. It is in the blood.

So, when I hear the battle names reeled off on TV documentaries — Shiloh, Vicksburg, Gettysburg — they sound distant on the narrator’s tongue, distant as Gallipoli, Waterloo or Omaha Beach. To most Northerners, they are just distant names.

But when I lived near Norfolk, Va., and traveled to Richmond on Interstate 64, I passed the Elizabeth River, where the Monitor steamed out to meet the Virginia (nee Merrimac); I passed Fort Monroe, where Jefferson Davis was imprisoned after the war; I passed Malvern Hill, where the Peninsular Campaign sputtered in frustration.

My wife, Carole Steele, was born in North Carolina and learned about the war firsthand from her great-grandmother, Nancy Hutcherson Steele, who was 10 when it began. She had plowed the fields during the war while her father and brothers were away fighting. When she died at the age of 98, she did so in my wife’s childhood bed in a small house on the banks of the Dan River. Carole was 8 at the time. 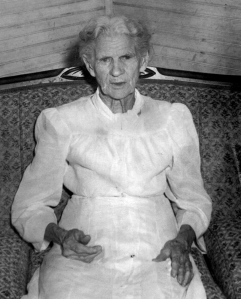 After the war, Nancy had married Rowan Steele, who had joined the Confederate army at the age of 14, becoming a bugler in the cavalry. He was allowed to join the cavalry because he owned his own horse.

At war’s end, as a courier for the 16th Battalion, N.C. Cavalry, he was wounded in the head at Appomattox and left deaf in one ear.

One of the first things he told his family when he returned from the war was that he could no longer tolerate to eat black-eyed peas. In one of his battles — he would never say which one — in a field of black-eyed peas the blood flowed in the furrows like irrigation water, a vision he could never shake when confronted with a bowl of the peas.

Rowan and Nancy were married in 1868. He lived until 1917, when because of his deafness, he didn’t hear the train that killed him.

She lived long enough to teach Carole how to tie things up with hickory strips instead of rope, a trick she had learned in the great deprivation of the war, when they stretched what little game they could kill with ”peckerwood dressing” (sawdust), when they ate pokeweed and made ”coffee” from parched rye and wheat.

And she taught Carole to make the paper flowers that many Confederate women sold after the war to make a few dollars for disabled veterans.

As Henry Miller wrote, ”The Old South was ploughed under. But the ashes are still warm.”

For a Fourth of July in the South, history is what fertilizes the rich red clay.