Morning in Seattle and the drizzle slowly brightens in the dawn.

For those of us who wake up early, cities can be a problem. For although a city has a special attraction in the hours before traffic and business, it is also an oddly dead time. At 5 a.m., the light from an overcast sky slowly turns the glass on the empty bank buildings snow white; the downtown streets are vacant.

And there’s really no place to find a good breakfast.

Sure, there are 24-hour chains like Denny’s, but I’m talking about a real breakfast. The fact is, a city is a slow riser. Like a groggy sleeper that first hits the snooze button, later spends a long time rubbing its eyes and finally stands under the shower half asleep, the city really takes all morning to get ready. Museums and the aquarium don’t open till 10. That’s five hours from now.

That’s one of the attractions of camping. No matter how early you get up in the wilderness, it’s open.

But there are secrets the urbanite knows. There are places he finds where he and his truck-driving buddies can get a plateful of scrambled eggs and a cup of coffee. The kind of place you don’t want to wander into and ask for Evian water or eggs Benedict.

Seattle is one of America’s great cities, or at least it was before all the Californians started moving there, before every streetcorner was anchored by a designer coffee stand.

It was a city that had a waterfront, with docks and boats. Most of the waterfront is now a tourist attraction, but the seafood companies and shipping wharfs can still be found, a little north of the aquarium and Ivar’s Acres of Clams.

In the early morning, before the tourists hit, the railroad switcher still shunts boxcars up and down a rain-shiny Alaskan Way and workers still pile fish into the backs of trucks.

There is an industrial clatter and clang along the road, under the viaduct, and steam mixes with exhaust in the mizzle.

And the city’s most beautiful breakfast can be had beginning at 5:20 a.m. on board the Kitsap.

One of the jewels of Seattle is the Washington State Ferry System and the huge, 2,000-car ferries across Puget Sound start operating each day at that hour. For a round-trip ticket of $7.70, you can board the Kitsap (or Walla-Walla, depending on which one starts the morning in the city) and take the one hour ride to Bremerton on the Kitsap Peninsula.

On board, there is a cafeteria line where you can get eggs and bacon, or a sticky bun and a cup of coffee to take to the table by the thick-painted window where you can watch Alki Point glide by as you leave Elliot Bay and enter the sound proper.

From the water, Seattle shows itself off as a seaport. You pass Harbor Island and its 10-story tall orange cargo derricks, you pass the waiting Japanese freighters anchored in the bay, and you see the working wharfs along the waterside.

The ferry rumbles through the water with its great diesel engines rattling the floors and windows. It churns a frothing wake through the water behind you and your coffee seems more leisurely. You get a chance to observe the weather as you eat and notice the deep slate color of the water and the patch of sunlight that breaks through near Vachon Island. Maybe the rain will break, you say to yourself.

If you’ve been here long enough, you know better.

The ferry curls around the southern end of Bainbridge Island and through the tight passages of salt water running between red cedar trees. 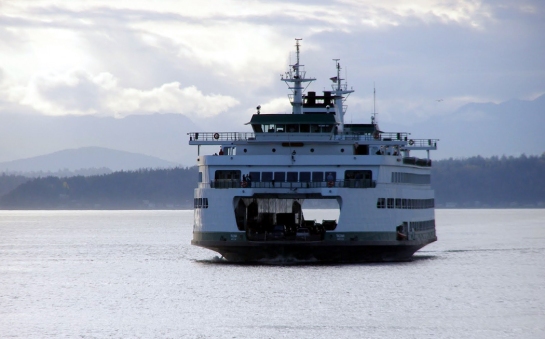 When it docks in Bremerton, you can just stay put and wait to take the boat back to the city.

If the 2 1/2-hour round trip to Bremerton is too much time for you to spend, the ferry to Winslow costs the same and takes only 35 minutes each way. For that trip you ride the Tacoma or Wanatchee.

Either way, the trip is Seattle’s greatest bargain.