”For one million dollars, how do you spell IQ?”

If you asked America that question, America would not win a million dollars.

What can I say? When Who Wants to Be a Millionaire was popular on network TV, a study by the Annenberg Public Policy Center found that most Americans thought it counted as educational television.

Some 70 percent of those asked also identified the Oprah Winfrey Show as ”serving their children’s educational needs.”

It has only gotten worse since then.

As a nation, we are dumbing down. We have decided, like one third-grader told my wife when she was teaching, that ”my mama says there’s only so much the brain can hold or it will explode.” And we’re playing it safe. 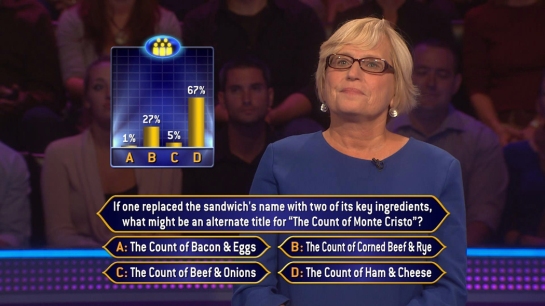 So we think the questions Regis Philbin asked were actually tough.

”Who is buried in Grant’s Tomb?”

Although, actually, most of the questions on that show involved celebrities rather than past presidents. The only Grant who counted was Hugh.

Another study found that 80 percent of seniors at 55 top universities flunked or nearly flunked a basic high school history test. 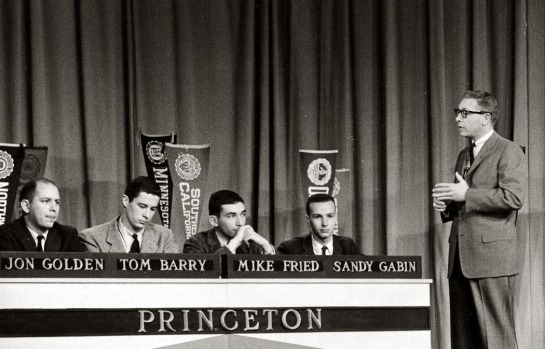 So that, nowadays, it is rare to find an actual quiz show on TV, outside Jeopardy, which keeps up a decent and atavistic standard. Instead of watching smart people answer questions, we now prefer to watch people being stupid and doing stupid things on “reality TV.” Perhaps this gives us the illusion that if we are not as idiotic as the contestants, perhaps we are now the “smart” ones.

Nothing says as much about the course of empire than the slow dumbing down of quiz shows, from the really arcane questions that Allen Ludden asked on the G.E. College Bowl to the pap that passes for knowledge on Millionaire. It is no surprise that in its current syndicated incarnation Millionaire is hosted by Cedric the Entertainer.

Nowadays, we are amazed when a contestant remembers the name of the cute little girl on Family Affair.

It tells us what we, as a culture, value. And we don’t value learning. We value entertainment.

In the past, even people who didn’t have much education valued it and made sure their children received its benefits. Older schools often have the names of great thinkers or artists carved into friezes around their sides: Aristotle, Mozart, Pasteur, Newton. They stood for high goals we should set and aim our efforts at.

That all has changed.

It isn’t merely that schools being built now might scribe the names of Katy Perry, Justin Bieber or Beyonce, but that we think there should be no names at all.

For in our warped sense of democracy, we have decided that ”all men are created equal” means that no one should be better than anyone else.

And we make our education system inane to the point that everyone can earn a ”B” and keep their wonderful sense of self-esteem.

Then we wonder why our kids don’t know where Chicago is on a map, can’t balance a checkbook, or believe George Washington was the general on D-Day.

Obviously, we decide, our school standards are set too high, and we lower them yet further.

Another study, by the non-profit Foundation for Academic Standards and Tradition, found that half of all current education majors in college — those who will become the teachers of our children — don’t read books other than what is required for class. And 60 percent think there is too much emphasis placed on books.

What do they want instead? If they are like most Americans, they want to be entertained. They want wall-to-wall television. And they’re getting it.

It is the democratization of culture, so that if you have the Encyclopedia Britannica on one side and Project Runway on the other, we decide they have equal weight.

Learning gives us the context to understand events. It prevents us from making egregious choices. It gives us skepticism.

Learning turns us into individuals rather than demographic statistics, rather than mere consumers. It gives us the confidence to make difficult choices and makes us the free agents for political choice that democracy was originally meant to nurture.

But we have become instead a nation of intellectual and emotional infants, swayed by commercial advertising, hoodwinked by ”alternative” science, led by politicians who can utter no thought longer than a sound bite.

We have the world’s largest and most sophisticated military yet are left defenseless by our own embrace of ignorance. Read your Gibbon.