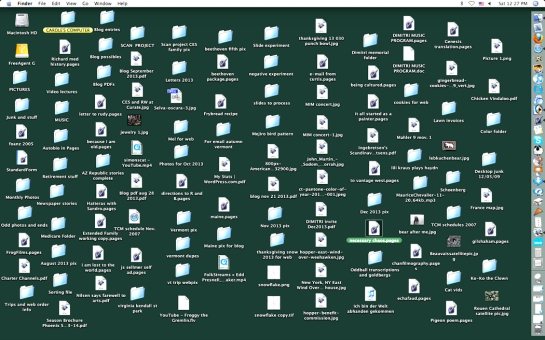 But I can’t find the list of reasons I made. It’s on the back of a press-release envelope somewhere on my desk, under last month’s mail, or at least parts of the list are. The rest of the list is in the other room, on the crossword-puzzle page of the TV Guide, where I wrote it when I couldn’t find any other paper.

I’m not a particularly disorganized person. I arrive at most appointments promptly and I don’t lose my reading glasses more than twice a year, but I’m not an organization freak, either. Actually, I’ve spent the last several years trying to be less organized.

I have three calendars, each has different appointments listed in it. I just write notes down in whichever calendar is nearest, or at least visible. There is very little overlap and no system whatsoever. And what is more, after I write it on the calendar, I rarely ever read it again.

And my desk is perhaps messier than it used to be. My filing system is chronological: The older it is, the deeper in the pile. I don’t need a secretary, but perhaps an archaeologist would be nice.

The question of organization comes to mind because I am thinking about organizing my hard drive. I’ve got a computer desktop that mirrors my physical desktop: a midden of icons and folders; I don’t even remember what some of them are. But organizing? I’ve seen too many good people go over the edge, with that microchip gleam in their eye as they describe how they’ve put all their kitchen spices on a spreadsheet stored on a thumbdrive. In alphabetical order, with the date of purchase listed, to keep track of freshness, and botanical names attached, just because the computer program has a place to put them.

Of course, most of the spices lose their savor over the weeks required to program, format and enter all the information.

The important thing to remember is: Storing data isn’t learning.

For me, the central issue is that computers can deal only in categories of information. You open a file, play with it and refile it.

The ad hoc solution is to create a third file, named ”miscellaneous.” It quickly becomes the fullest file. It is a slush pile of stuff you don’t want to have to deal with, at least not yet.

The fact is that you can’t categorize a subject until you know something about it, so anything that fits the neat organization of a computer file is something you already understand.

If you want to continue learning — as opposed to memorizing — you need to pay more attention to those things you don’t understand. That’s where your mental and emotional growth will happen.

It reminds me of the sage words of the late artist Frederick Sommer, who once told me he only reads books that he doesn’t understand. ”Why would I read something I already understand?” he asked.

I will finally clean up my desktop because it will help me write. I could not do without my computer and the way it puts me online with some wonderful and weird stuff. But I am never buffaloed into thinking that the computer, no matter how much hard-drive memory or RAM megabytes it has, can begin to be creative, even on the most modest level.

To do so, it would first have to get sloppy, make mistakes, put things in wrong categories and then recognize, with a certain amount of joy, that there is a way the wrong category can be right, if you turn the information upside down and insert it sideways.

Creativity happens when two things rub up against each other. That is more likely to happen, in my experience, when the world isn’t too orderly and the things of the world are allowed to slosh around a little in their matrix.

So I have cultivated a little chaos in my life. It is the wellspring of all ideas and keeps life interesting.

Sure, too much chaos can be a bad thing, but I’d rather have too much than not enough.