Old Thorvald was 87 and his jowled face was bristly with white whiskers. And like many elderly Norwegians, he was dressed in a loose-fitting black pinstriped suit with a four-button vest and starched white shirt, even though the two of us were out under the July sun with pitchforks, loading hay into the wagon.

In the southern tip of Norway, just north of Kristiansand, I was staying on a small chicken farm with a family distantly related to my own. Thorvald’s daughter, Marie, was married to Anders, who had raised money to buy his farm by working as a wood-floor layer in America. Their daughter, Ruth, was my age, and she made the rounds each afternoon, delivering eggs in their old beat-up Opel pickup truck. We ate eggs at most meals.

It was the middle of July. Rains came every day at about 4 p.m. and left a rainbow over the rocky prominence at the edge of the property — Norway is all rock. That evening we ate fresh ham with its fat baked crisp around it — and eggs. We drank a warm, steamy ale that Anders had brewed in the kitchen. You might better have called it a ”malt cider.”

And in the evening that never seems to get dark, Anders played the fiddle and Thorvald strummed the mandolin.

Since they are Norwegian, they played hymns.

I mention all this because it is the little details that flesh out the recollection of travel: From travel years ago, I often cannot recall the major events, but I can taste, smell and hear the sensuous bits of which they are constituted.

The next morning, we drove to the little fishing town of Sogne, a tiny stone harbor ringed with immaculate red clapboard houses with white trim or white clapboard houses with dark green trim. There we boarded a bobbing fishing boat and headed out into the edges of the Skagerrak, the deep, cold rock-filled channel that separates Norway from Denmark. 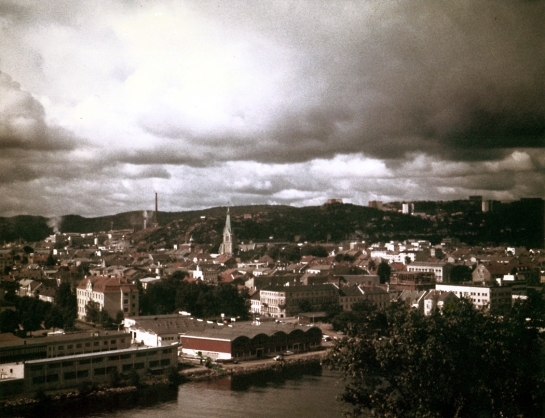 The old boat putt-putted out into the iron-colored swell under a gunmetal sky toward a gray granite island with a single neatly painted wooden cabin on top.

In the arthritic wind, we hung a fishing line over the transom and dragged it behind us. The 25-foot boat rocked in the waves, scattering sea spray over us as its bow splashed up and down, slapping the water.

Ruth caught a 5-pound sea bass and wrapped it up in paper to bring home to her cat. Anders caught a bucketful of salmon, and I caught a chill in the salt spray.

Later that afternoon in the cabin on the rocky island, we cooked the pink-fleshed, sweet-fleshed salmon and ate them with potatoes and cucumber salad while we warmed ourselves in front of a wood fire and tried to dry out our sweaters in front of the hearth.

And when we came back to shore that evening, the sky still bright at 11 p.m., it snowed on us as we drove back to the farm.

It was the 29th day of July and we had snow. It was only a little flurry, but it was wet, clumping gobs of snow that stuck to the windshield.

Such little things, snow in July, are indelible.

We got back to the farmhouse, made the cat very happy and finally slept with the comforting, resinous smell of a wood fire in the kitchen stove.