One very trendy New York artist has said, ”Money creates taste,” but the truth is otherwise. Money can create fashion, but never taste.

In fact, more often than not, the only taste that seems to come from wealth is bad taste, and that in huge, ostentatious quantities.

For instance, the money of George Vanderbilt poured into the mountains of North Carolina near Asheville has created a garish monument to obscene wealth and acquisitional excess called the Biltmore Estate.

Begun in 1887, it is a 250-room mansion in phony French chateau style that took an army of stonecutters and craftsmen six years to finish. Even today, in the possession of Vanderbilt’s descendants, it is the largest private home in America, situated on 8,000 acres of North Carolina mountain real estate. This has shrunk from its original 125,000 acres.

It is an astonishing collection of bric-a-brac and great art treated as bric-a-brac. Durer engravings are treated like knickknacks, like so much plundered lucre, heisted from the trove of Europe to show off to admiring Americans, unable to create great art, but sure as hell able to buy it.

Designed by the ”architect to the robber barons,” Richard Morris Hunt, it is a mind-boggling showcase of things to gawk at, but not to admire.

It took six years and 1,000 men to build. With a 390-foot facade, the house has more than 11 million bricks, 250 rooms, 65 fireplaces, 43 bathrooms, 34 bedrooms and three kitchens, all of which are contained on over four acres of floor space.

Through its center hangs an iron chandelier weighing 1,700 pounds.

Inside can be found a vast collection of art and furniture, more than 70,000 cataloged items, including 23,000 books, furniture from 13 countries, more than 1,600 art prints and hundreds of paintings. One cannot help but think of Citizen Kane.

There were indoor bowling, billiards, a swimming pool, a gym. Outdoors, there were croquet, fishing, horseback riding, more swimming and hunting, hiking and camping.

It is a monument to excess, of a kind Bill Gates can only dream about.

The Vanderbilts could entertain a few close friends at a dinner table that could seat 64 guests in a banquet hall that is 72 feet long. Meals served at the table were usually seven courses long and required as many as 15 utensils per person.

But then, the Vanderbilts were wealthy people.

George was a grandson of Cornelius Vanderbilt, aka the Commodore, who is best remembered as one of the great robber barons of American monopoly capitalism. It was the Commodore’s son, William, who responded to questions of how the family business practices might affect the public by saying, ”The public be damned.”

The Commodore paid for the Breakers in Newport, R.I., also designed by Hunt, which is a mere 70-room ”cottage.”

It pales beside the splendiferosity of Biltmore House.

In fact, the estate is so impressive, it’s a shame it isn’t beautiful. Instead, its a hodgepodge of architectural styles, each displayed with the same aesthetic care as the collected artwork, which is often hidden behind furniture.

Hunt pulled together a little of this and a little of that, with no controlling idea, so the house is a kind of architectural landfill. 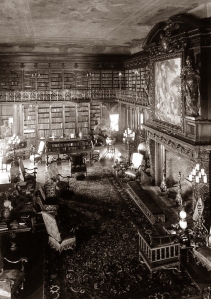 There are some very nice details, but they never add up to a satisfying whole. Instead, like a meal of too much rich food: garlicked langostinos and chocolate cake, they sit in the belly undigestible, waking you up in the middle of the night with disturbing dreams.

It certainly isn’t aesthetics that brings the crowds. There may be a great deal of art on the walls of the Biltmore mansion, but these gawkers would not be paying the hefty admission price to see Claudes and Renoirs. No, like some tabloid version of ”America’s Most Wanted Mansions,” it is the excess and wealth that bring them in. They want to see how real money lives.

For Americans have an oddly unsolved double standard when it comes to wealth. They are decidedly democratic in the sense that they believe, fervently, that no one is better than anyone else. They wear their sloganed T-shirts and shorts to prove it. But they don’t imagine that this equality rests at the level of a working middle class. No, they imagine an equality where everyone wins the lottery and has tons of moolah and can make themselves just such a mansion to live in and watch Wheel of Fortune while their servants bring them lite beer and corn nuts.

It is a proletarian dream of money: Cash without the scruples of good taste. Let’s all put a dozen Jaguars in the garage. Let’s light cheap cigars with $100 bills and bring Uncle Ed around for a game of snooker in the basement while the kids bang away, attempting Heart and Soul on the Steinway.

For these crowds of gawkers at the Biltmore see the Vanderbilt family as a 19th-century version of the Lotto grand prize.

And I’m afraid, the Vanderbilts have obliged them by building the world’s largest, most expensive double-wide. 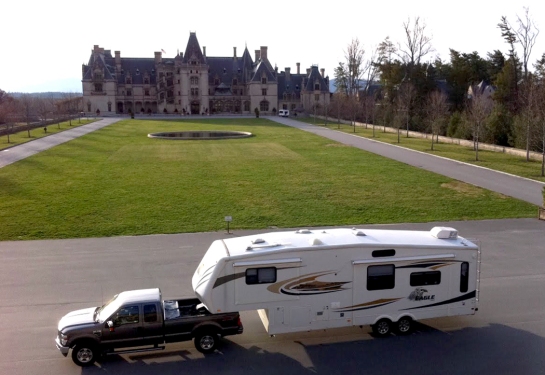