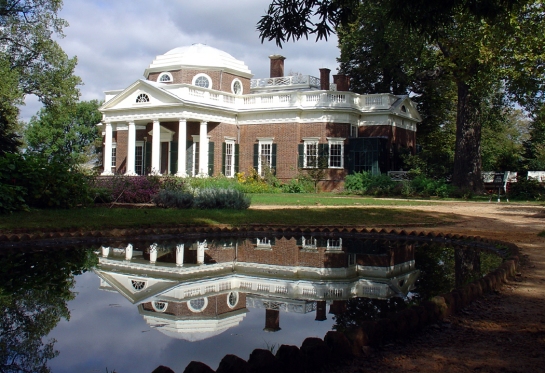 There are few homes in the world that more exactly describe the minds and personalities of their owners than Thomas Jefferson’s Monticello.

The most contradictory personality of America’s early years created for himself a building of contradictions. It is a tiny mansion; it is Spartanly Baroque; and it is a slave-run plantation that verily sings of the dignity of the free man. Jefferson, himself, recognized much of the tumult of his mind.

He was an uncomfortable cross between the 18th-century man of the enlightenment and the emerging 19th-century man of sentiment. So he built a measured, proportioned Palladian home and filled it with moose antlers.

There was in Jefferson both the love of order and reason and the love of wild nature. It is perhaps these warring sentiments that give his home such a special place in the American imagination. 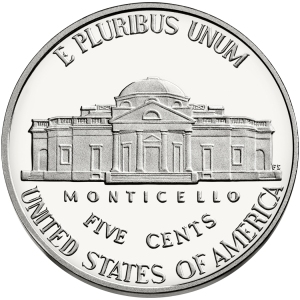 His home, of course, is Monticello, a 5,000-acre estate near Charlottesville, Va. You probably have a picture of it in your pocket right now — on the back of a nickel. Take a look at it: a classic Greek portico, complete with Doric columns, under a Roman dome and extended on both sides by Renaissance windows. It has a refined symmetry as you see it from the front, or rather from its more familiar west front, for Jefferson gave it two fronts, one in the west, facing his lawn and flower garden, and a second in the east facing its carriage road. It was the east front that visitors first saw on arriving.

Either front is perfectly ordered.

But seen from either of its intervening sides, Monticello loses that symmetry and becomes oddly unbalanced. The famous dome is no longer in the center of the building but lopped over to the one side.

And it becomes apparent that the house, divided into thirds, has its middle third slipped like a rock fault, to the West. Like its owner, you look at it one way and you see one thing, but look at it another way and a second aspect, less easily understood, appears. 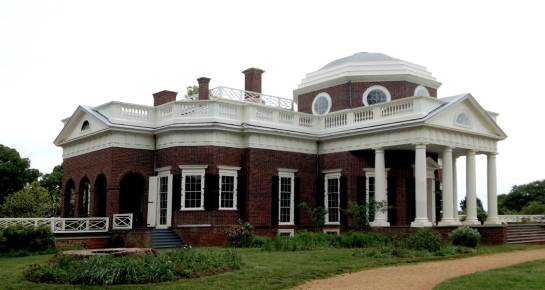 Jefferson built his home on a mountaintop so he could see the Blue Ridge in the distance. He designed it combining his love of geometry and gadgetry with the French details he had seen as an emissary to France in the 1780s. In its combination of influences and the idiosyncratic overlay of Jefferson’s mind, Monticello may lay claim to being the first truly American house of any importance built in the newly created nation. It is part classical, part crackpot.

The classical side can be found in the columns and friezes; the crackpot in the way he used each of the classical orders in different rooms, here a Corinthian column, here an Ionic, so that you get an uplifting art-history education as you take the house tour.

There are other oddities. There are only two closets in the whole house: one in the guest bedroom and a second hidden in a second-story loft above his bedroom, where he stored his out-of-season clothes. That closet is open to three oblong ”portholes” that hang in the air above Jefferson’s bed. The bed, too, is odd. It is built into the wall between his bedroom and study, or ”cabinet,” as he called it. 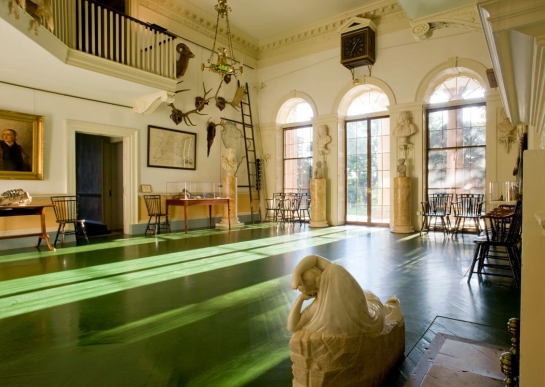 He loved gadgetry and built dumbwaiters into the molding of one of his fireplaces. He has a revolving-door Lazy Susan for delivering food to the dining room quietly and efficiently. There is a weather vane with an arrow that rotates on the ceiling of his porch and a seven-day clock that doesn’t quite fit into the space he wanted, so he had to cut holes in the floor to make room for the clock weights.

There are no windows in the third floor; all its illumination comes through skylights. And Jefferson hated to waste space with stairs, so he had them shunted off to the recesses of the house, and further saved space by making the stairways barely wide enough for one person to climb at a time. One has to wonder how he ever managed to get the mattresses up to the second-floor bedrooms. The narrow treads and high risers mean that modern-day visitors cannot visit the upstairs; they don’t meet code.

On the third floor, there are a few unheated bedrooms and the great octagonal Dome Room, which was a favorite inspiration to Jefferson but which proved so inconvenient it was relegated to storage.

One shouldn’t make too much of the bedrooms being unheated. Jefferson, in the Franklinesque practical half of his personality, rarely heated any room until the temperature was officially below the freezing point. ”Waste not, want not” — you can hear the line from Poor Richard’s Almanac.

But neither should one make too much of the oddity of the building. As with its creator, the building’s overwhelming impression is one of nobility, of something made with a higher purpose in mind. It is as if the house is the embodiment of the Spartan virtues necessary to create a new nation, a new political system, a new national sensibility out of whole cloth.

Jefferson wrote intensely if ambiguously of his own bifurcated personality in a famous love letter that he penned as a widower to the married Maria Cosway. It is a fierce debate, written in dialogue between his head and heart in 4,000 words and in which neither side can achieve victory.

But in that letter, written in France to the Italian wife of an English painter, he finds time to talk of his beloved American home. It is not head but heart that speaks:

”Dear Monticello, where has nature spread so rich a mantle under the eye? Mountains, forests, rocks, rivers. With what majesty do we ride above the storms. How sublime snow, rain, thunder, all fabricated at our feet. And the glorious sun, when rising as if out of a distant water, just gilding the tops of the mountains and giving life to all nature.”