In a corner of the Fifth Arrondissement, next to the Gare d’Austerlitz, is a public garden that has come to be one of our touchstones of a visit to France. We go back each time. It is not one of the tourist hotspots, like the Eiffel Tower or the Louvre, but because we found it on our own during our first trip to Paris, it has become an old friend.
The Jardin des Plantes was built in the 17th century as the king’s garden, and initially grew medicinal and kitchen herbs, but later became one of those demonstration gardens in which pioneering botanists planted samples of vegetation they had collected on voyages around the globe.
Around the periphery of the garden are a zoo and several museums of natural history. Some are so old they practically grow fungus; one has been updated to become a sight-seeing draw — at least for the thousands of school children who bus there daily on class trips.
As we visited in 2002, it seems I was caught up again in the conundrum of the opposing French tendencies to formalize and regularize nature, as in its famous gardens, and to see nature as something red in tooth and claw: the opposing tendencies of classicism and romanticism.

The Jardin des Plantes is a collection of odds and ends — various gardens, a small zoo, a bunch of superannuated museums, some sooperwhoopie new attractions and lots of old, old trees.

At the far end is one of the true treasures of France, although I’m not sure anyone here knows it. The Galerie de paléontologie et d’anatomie comparée is one of those Beaux Arts buildings, the kind with the names of noted scientists carved around the frieze, that are so common in the old museum world.

It is a long, thin building, two stories tall. From the side, you can see in the windows that there are “wonderful things,” as Howard Carter once said: the long spiny backbone of a whale, skeletons of prehistoric mammals and birds. 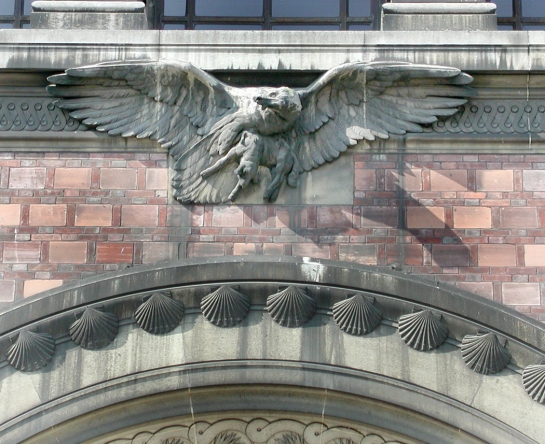 But the building itself is notable. It is decorated on all sides with the most beautiful and decorative sculpture of the natural world. As an underpinning to window sills there are lobsters, hermit crabs, birds. In panels along the side of the building are giant wolves and lions. Above the entrance is a great eagle holding a lamb. A frieze completely bands the building with alternating scallop and vollute shells. Another panel on the west side has a beaver. Yet another has a scene with a man grappling with a bear cub over the dead body of its mother. Another had two men stealing young eaglets, having killed one adult, but with a second adult attacking the men.

It was a 19th Century version of the Gothic love of nature.

But there is also a clue to the essential French character. As we entered the museum, on the queue for the tickets, there was a grand marble statue of a crazed adult orangutan strangling a prostrate nude Indian. It was a horrible struggle, with the man wounded, a gaping slash in his forearm, and the ape with his long arms extended down, holding the neck and head of the man flat, with his eyes bulging.

This is a version of nature with long teeth, a vision of nature as both beautiful and vicious, a kind of sublime: awesome in its seductive danger.

There is a dichotomy in French culture. One is first made aware of it in the Gothic cathedrals. There, nature is everywhere, and not a storybook nature, but an experienced one, a familiar one. If the church preached a contemptus mundi, it failed to gain traction, at least on first go-around. You can sense the love of the natural world that invests every carving, every Gothic tapestry.

That classicism that I mentioned yesterday, that stylizes and sublimated grubby nature is the other French impulse. And I see a kind of continuous war between the love of nature and the fear of it. Classicism is on one level a kind of defanging of nature.

But the French seem always aware, underneath, of the tooth and claw. So, in the Gallery of Paleontology and Comparative Anatomy, the orang is seizing man, elsewhere, man is seizing the eaglet and bear cub. It is “man against nature, nature against man, god against man, man against god. Very funny religion.”

Perhaps the perpetual French classicizing derives not from a separation of humankind and nature, but rather from a constant awareness — and wariness — of the natural world.

The need to create, as at the Jardin des plantes, of a “jardin systematique,” or to display, as at the Gallery of Paleontology, all those gory skeletons of Siamese twins, and cats’ brains in formaldehyde, comes from that fascination with nature that is akin to a fascination with death, violent, bloody death.

I had never before understood — or thought I understood — this classicizing impulse in French culture, but today’s visit to the natural history museum has given me a clue.

Americans think of nature as vast and sublime. For Germans, nature is a place to exercise briskly. English nature tends to be bucolic: a cottage, a few sheep and a porringer. French nature is all tentacles and talons.

Aside from all this theorizing, the Jardin was a wonderful place. There is a huge tree, a cedar of Lebanon, planted here in 1743. It’s feathery canopy spreads out like Yggdrasil. I made a photo of it in imitation of Georgia O’Keeffe’s “Lawrence Tree.”

The Grande Galerie de l’Évolution — also at the Jardin des plantes — is as modern as the paleontology museum is musty. A shining example of modern museology, it houses an old collection of taxidermy and gives it a new spin, assembling the old stuffed animals in new arrangements, with dramatic lighting and display. 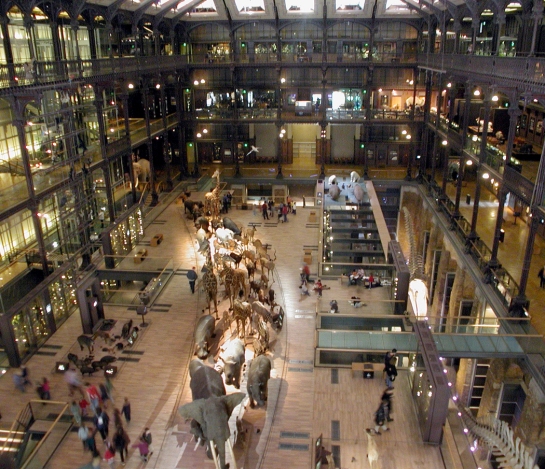 On four floors — although to call them floors is an injustice, for they are really a series of catwalks and mezzanines hanging over a four-story cavity, filled with glass elevator shafts. Meanwhile, a parade of animals, as if marching to Noah’s boat, weaves through the central second floor.

It was a great plan to modernize what was once a dusty old display of vitrines and taxidermy.

But the final highlight of the day came next door at the great 19th century greenhouse and conservatory, Les Grandes Serres. The three-story-high greenhouse, like a long loaf of glass, was filled with tropical and exotic plants, dripping with moisture. At one end of the interior, a two-story waterfall has been built of concrete, with vines hanging down, dripping water.

My eyes turned on and I began making photos, in a way it only happens when my eyes are on. Made nearly 200 pictures. Another in the series of garden photos. 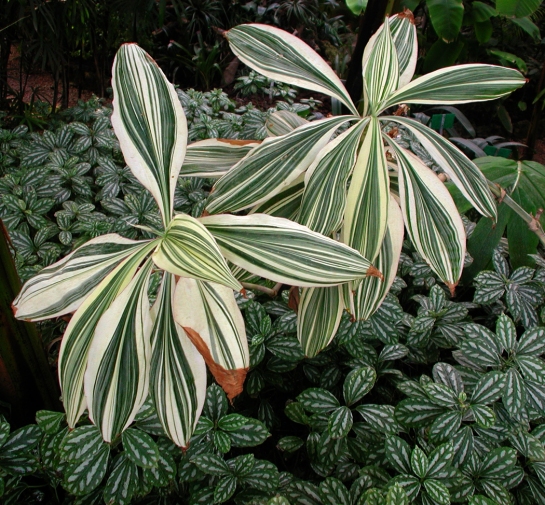 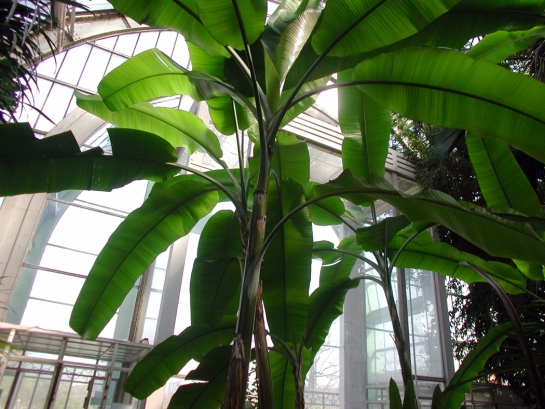 Spent from that, we began walking home. Carole got a cassis ice cream cone, purple and sharp.

We got back to the room and dropped off to sleep, missing dinner.

Carole’s picks of the day: 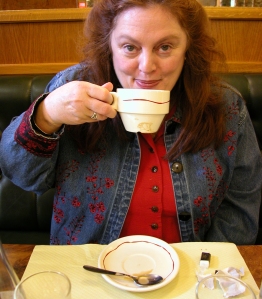 That cafe au lait and the croissant. The one I had today was even better than the one I had before. I enjoyed being able to communicate in French. The images of the images at Ste. Chapelle keep coming back to me. I loved the statue of the orangutan strangling the Indian. The parade of animals at the museum of evolution (like a Disney Noah’s ark). The plants in the garden systematique. My favorite thing was the female lions on the front of the museum of natural history. All the wonderful sculptures of animals there: lobsters on windowsills, hermit crabs. Those wonderful animals. Oh, the croque monsieur was incredible. Sliced bread with very thin ham and bechemal sauce and some kind of white cheese, then fried, perhaps dipped in egg batter first. Oh, and finding the wonderful little wooden toys for the grandbabies. Oh, and the Redoute rose and lily book. Richard looked so serious about the grandbabies. Seeing Richard’s joy in the greenhouse. 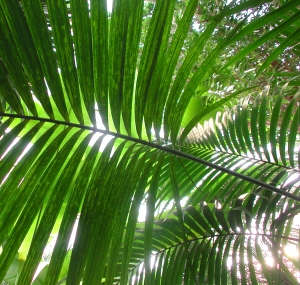 The sculptural decor on the Galerie de paléontologie et d’anatomie comparée was unforgettable. All those rich animal designs crusted on the masonry. I’m sure I don’t know why they don’t sell a catalogue raisonee of the carvings. It’s a treasure. Inside, the Orang attacking the Indian was a hoot. The hoard of skeletons inside was breathtaking (photographie interdite). The Jardins des plantes in general was special, but when we entered the greenhouse, I went buggy: My eyes turned on and I went nuts with the camera. All that vegetal variety, all that green fecundity, all that sinuous vinosity and verdant threat. It was the mille fleurs and Gothic acanthus leaves come to life.