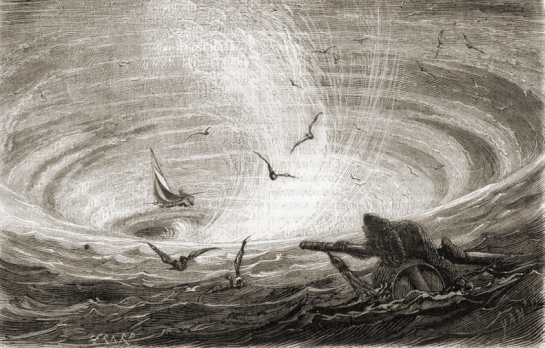 This is a common saying these days from political commentators on TV or in op-ed pages. The assumption is that there is such a thing as the political center. It is an assumption that needs to be challenged.

We tend to lionize the political center, as if it were the place where sanity is found, battered on left and right by zealots and ideologues. But, in fact, there is no codified political theory that can be tagged with the label. It is, in fact, the bin for dumping the leftovers.

Those who hold genuine political thought fall down the steep slopes of the bell curve on both sides, toward conservatism and reaction on one side, and toward socialism on the other. Marx vs. Ayn Rand. Both sides hold their opinions with passionate intensity. What we call the middle is really just the no-man’s land between them where they battle it out, and with no clear victor, they fall, exhausted, between the two poles, and we have a stalemate. That is what we call the center.

In practice, this has actually worked out quite well for the rest of us, who are not card-carrying members of either side. It is as if two out-of-phase sine waves have cancelled each other out, and we live in relative peace. Politics, when done right, is the clash of interests, where no one interest prevails all the time, and compromises are reached to keep each side, not happy exactly, yet equally miffed, but just under the boiling point.

“The trick from my angle is to make my play strong enough to tie you up, but not make you mad enough to bump me off against your better judgment.”

This, then, is the center, where most of us, unafflicted by theoretical strait-jackets, try to live our lives spending the least possible time on policy and government. Government is something up with which we must put. To paraphrase Willie Loman, “Taxes must be paid.”

This doesn’t mean we don’t recognize the importance of social order, or a ruling forum that functions efficiently and cleanly, but more important than making rules about who gets to use which bathroom, are such things as the welfare of our children, our careers, the availability of food, and whether the Cubbies will ever again win the World Series. That a well-run government is necessary for some of those things is acknowledged, but just how much energy we put into politics is the issue. In ancient Athens, you were judged in part by whether or not you were politically aware and active. But for most of us in middle-class America, being politically active is rather more a badge of how misguided you are, how obsessed, how geeky.

We have, since 1789, run on the well-oiled principle that if we let the two sides fight it out, we can comfortably nestle in the hammock left in between them. There have been a few times, like the years from 1861 to 1865, when the center did not hold and the country erupted. We came close again in 1968, as those of us who lived through it remember. The pressure has been building up again. Both political parties found their basic premises threatened this election cycle. Republicans have discovered that the dissension, obstructionism and bigotry they have sowed for the purpose of maintaining power in Congress has come back to bite them. What they hold as true conservative values are shredded by the buzz words and palaver of Donald Trump, who seemingly holds no values whatsoever, outside of Donald Trump. Democrats found that a socialist roused a significant sector of their membership, driving their conventional candidate further to the left and away from the coveted “middle.”

That middle has become a vacuum as the polar sides pull apart and we suffer the pain.

The central problem is that, because the middle is not a platform, not a policy, not an ideology, it cannot clearly enunciate its principles, outside of a basic, “Don’t go nuts.” The Right and Left have manifestoes and position papers, arguing with faultless logic the rightness of their causes — albeit within the confines of the definitions they use and the axioms they leave unexamined. We in the middle have only a defensive “please go away” and “leave us in peace.”

Once in a while, however, we are called upon to slough off our natural passivity and take a stand. In the 1960s, we had to decide whether segregation was morally defensible, as a hundred years before, we had to pick a side on slavery. When we didn’t step in, as with the Know-Nothings of the 1840s, or the McCarthy era in the 1950s, the country went off the rails and the looneys took over. We face something of the same now, with Donald Trump, whose unfinished sentences pile cliche on cliche, Ossa on Pelion, and we are buried under a mountain of verbal garbage, un-thought-through, indefensible, and outright dangerous.

My great friend, the late Dimitri Drobatschewsky, grew up in pre-war Berlin. His family was forced to flee the Nazis, and his father eventually died at Auschwitz. He remembers as an adolescent hearing Adolf Hitler speaking live. “Everything he said was a banal platitude,” Dimitri recalled. “It was meaningless cliche piled on meaningless cliche. But he was such a persuasive and hypnotic speaker that I found myself, a Jew in Germany, that it was all I could do to keep my arm from raising in the Nazi salute.” Dimitri eventually left Germany for France, and after the fall of that country, joined the Free French forces under De Gaulle.

But Dimitri reminded me that Hitler didn’t usually come right out and say specific things. He let his minions do that. Hitler spoke of vague ideas, such as “Germany for the Germans,” and “Make Germany great again,” which are hardly controversial on the surface, but underneath was an unspoken agenda, heard by his followers as clear as a gong. One after another the meaningless platitudes piled up until an entire nation found themselves committing atrocities their grandchildren are still ashamed of.

One doesn’t want to pull out the Nazi trump card too easily. One gets tired of calling any opponent a “Hitler.” It too often trivializes the insult. But there is the parallel, too easily overlooked, especially by his followers. If we don’t want to discover in four or five years that we were “good Germans,” we had better decide now that even if we are not enthusiastic about the choice we have to make in November, we had better not give in to apathy, we had better make the effort to go to the polls, else we could wind up somewhere very dark, very violent, very shameful.