In October my ex-wife and I decided to take a drive from Asheville, N.C., to Sullivan, Maine, to visit our old college friends, Sandro and Mu. This is Part 3 of that trip. 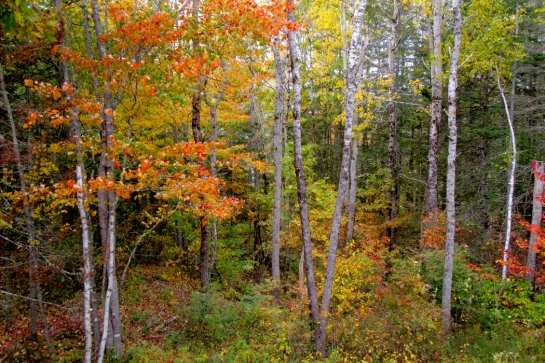 Sullivan, Maine, is a small community in Hancock County along the eastern edge of Taunton Bay, about a dozen miles east of the cutoff road to Mount Desert Island, Bar Harbor and Acadia National Park. It is well outside the normal haunts of seasonal tourists, and just off of U.S. 1, which continues north to the Canadian border.

It was founded in 1789 and was originally a fishing town, but later became prosperous by mining silver and quarrying for granite. The primary use for the rock was for making curbstones for cities further south. Several abandoned quarries are still found up behind town in the woods.

The stone was loaded onto ships at Gordon’s Wharf in Sullivan and shipped out past Sullivan’s most prominent feature: a two-way rapids at the mouth of the bay which shifts direction with the changing tides. The wharf was later used for lobster boats. the town is now home to about 1200 people. 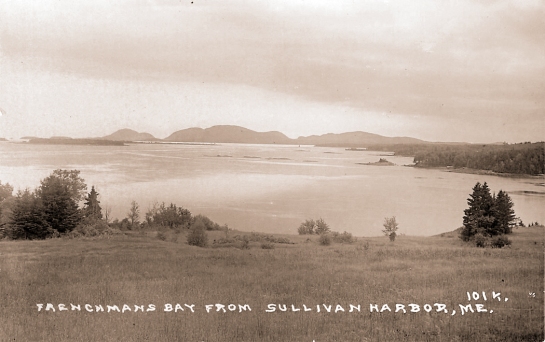 I wrote about Sullivan in more detail in a previous post.

My college friends Sandro and Mu moved there in 1988 to live in an old white clapboard house about 100 yards off the road behind a stretch of woods.

The two are an amazing pair. Mu has multiple graduate degrees and Sandro was a Classics scholar who reads Latin for pleasure. I count them as my closest friends for the longest time; it is always like coming home when I go to visit.

And I’ve been up to see them too many times to count. Before the two got married, Sandro and I drove to Maine together some 40 years ago. I believe that is when he first decided he would eventually move there.

A few years ago, Mu’s sister, Gina, and her husband, Jay, moved to Sullivan also. They generously offer their above-the-garage apartment to visitors. 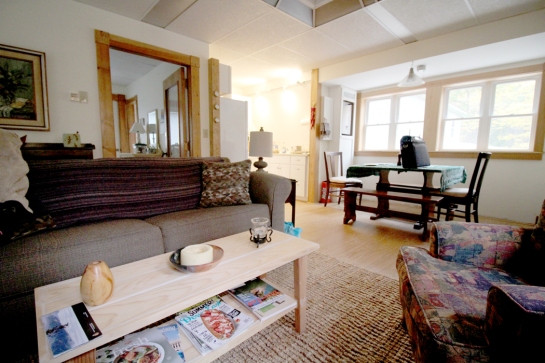 And so, Anne and I arrived in Sullivan by late afternoon on Monday and moved into the apartment. On Tuesday, Anne crossed item number two off her wish list by visiting the L.L. Bean in Ellsworth to find a new pair of shoes. Back in Sullivan, she napped in the afternoon while I listened to music and read some Melville.

On Wednesday, all hell broke loose. 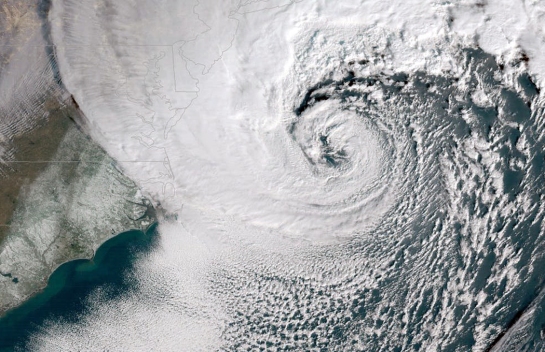 A “bomb cyclone” is a new, fancy word for the storm that creates a “nor’easter.” We got hit on Wednesday night.

The wind hit 60 mph. The rain came down in Niagaras. Windows rattled. Door was blown open. Morning came, the storm continued. In the dim light of dawn, I could see out the bedroom window and watched a 60-foot pine tree catch the wind; its tip was pulled off from vertical by 20 feet. 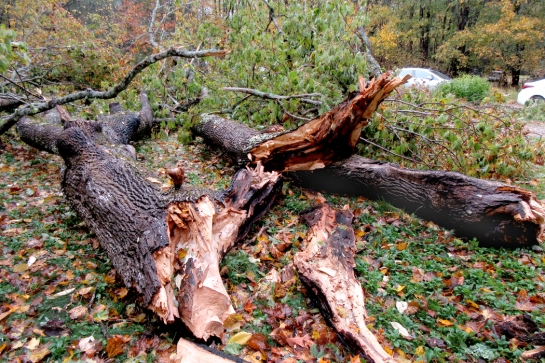 It finally died down about 11 a.m. on Thursday, but no power anywhere in miles around. Power went out before dawn on Thursday morning. Trees were down everywhere. Most of coastal Maine was damaged. Over all New England, nearly half a million people were left without power.

We were basically on hold for three days. No electricity, no water (the well-pump runs on power), pouring jugs of bought water in the toilet tank so we can flush three or four times a day. Darkness after sunset (by 5 p.m., it is already too dark to read). 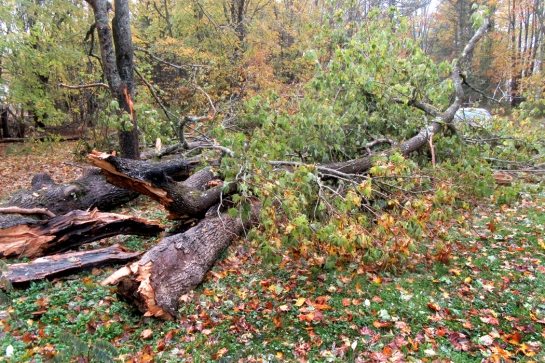 That meant not only no power, no internet, no cell phone, no recharging anything, it also meant no water, no stove, no refrigerator no way to wash dishes and no way to make coffee in the morning. Jay brought up to us a couple of jerry-cans of non-potable water to flush with. Sandro brought us a bag of ice to put in the fridge so the food wouldn’t go bad.

The only heat was a propane stove in the living room, and the pilot light went out every time the wind blew. (Relighting it required getting on the floor with a flashlight and twisting dials and pushing buttons to get it to flame up again).

This does not go over well. 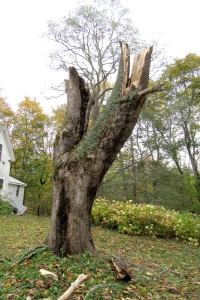 When the thing died down, we tried to drive down the street to see how Sandro and Mu fared, but a tree was broken at the base and leaning into the power lines, stretching them like a rubber band and threatening to snap them. We debated whether to drive under the tangle, and did so gingerly. Trees and branches were littered everywhere. Just before we got to Sandro and Mu’s driveway, a gigantic pine tree was broken into two 8-foot chunks in the road, one half on one side, the other on the other with just enough room for a car to slip between.

The mighty maple tree that had stood beside their house was a shattered pile in the driveway. It missed their car by a few feet.

“We heard a boom in the night, I thought it was thunder,” Mu said. “But it must have been the tree falling.”

We then went the 12 miles into Ellsworth to see if anyone had power yet. It was eerily quiet and empty. No power anywhere. 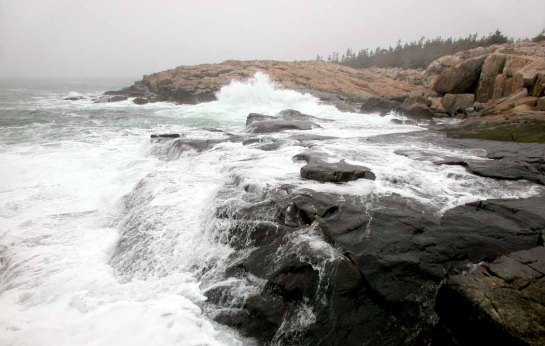 The third day and the power was still out. But the air had cleared and the sun shone again. We left the dark apartment and drove to Schoodic Point, which is part of Acadia National Park.

Schoodic is one of my holy-of-holies, a windswept peninsula of rocks hammered by constant waves. If the weather is right, they crash into the granite and spray a hundred feet into the air. And, after the bomb cyclone, the weather was driving the water into the shore in massive bursts. 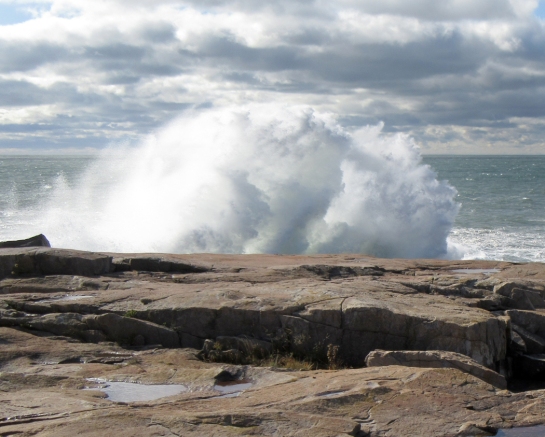 It was still windy and cold, which turned my hands to ice and my face to a kind of numb leather. But it was perfect: This is Schoodic the way it is supposed to be, nature with unchecked energy. Spume, thunder and we were nearly the only ones there to enjoy it. 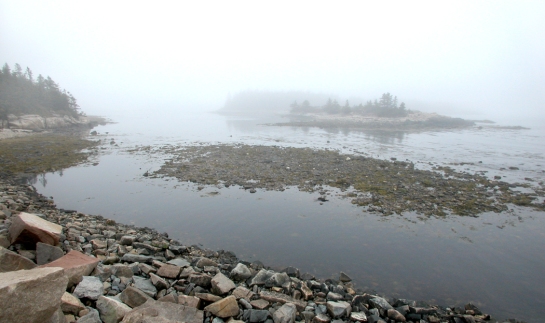 It is Saturday and there were trucks in Sullivan with cherry pickers and flagmen working on cutting down fallen and damaged trees and re-stringing wire. By about 3 p.m., power was finally restored and Anne could take a shower and decide that Maine was beautiful, after all.

Sandro and Mu cooked dinner. He fixed some salmon and asparagus; she made apple cobbler for dessert. We sat around their dining room table, drank wine and talked into the evening. This is what we came for. 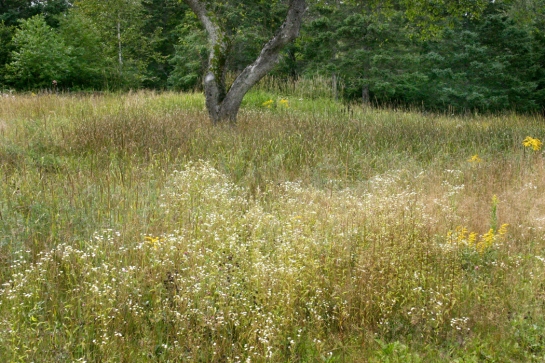 Back in the apartment, Anne rested on a heating pad for her aching back and I sat across the room, reading under the only light we had on, which made a kind of warm, glowing light very like the candle light we had been getting used to. It makes a difference if you do that by choice.