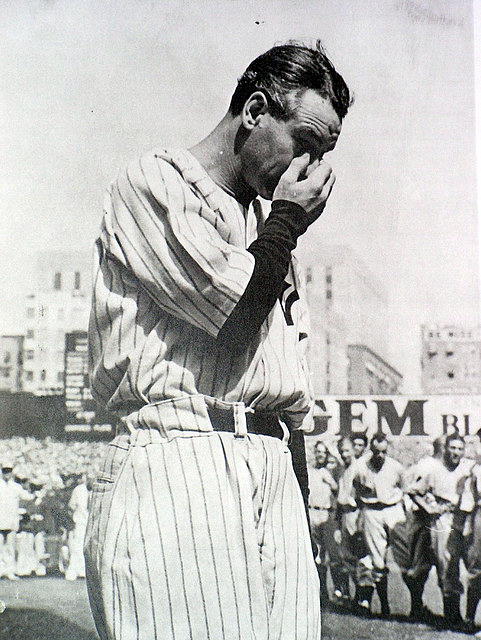 The field was green, the sky was blue, the chalk lines were white, and the announcer was Red Barber.

This was heaven for baseball fans in midcentury America, as the Ol’ Redhead crooned his way through nine innings of the game that defined the country, providing play-by-play that we recognize now was more poetry than prose, more evocation than flat fact.

“Preacher Roe is sitting in the catbird’s seat,” Barber would say in his smooth Florida drawl, as the count was 0-2 and the score was 6-1 in the ninth inning.

Red Barber was bringing poetry to an audience that, more than likely, would never pick up a volume of Shelley or Milton.

It was a style of talking one cannot imagine accompanying Monday Night Football, for although football is a fine sport with lots of excitement, it does not provide the deep soulful resonance that baseball does.

That is because football is just a sport. Baseball is life.

This is why there are so many great baseball novels and movies, and why there is memorable baseball verse by Walt Whitman, Marianne Moore and William Carlos Williams — all major-league poets.

“Baseball is ballet without music, drama without words,” said another announcer-poet, Ernie Harwell.

Football and basketball together would have to dig deep to find a tenth of the literature that wells up naturally from baseball. Of all major sports, only boxing carries with it the metaphorical punch of baseball.

It is ritual: Each batter re-enacts the motion of the heroes that preceded him. It is not necessarily religious, despite the monologue of Annie Savoy in Bull Durham, but it’s the repetition of solemn rites: the tapping of the bat on the plate, the pitcher’s windup, the pantomime of signals from the third-base coach.

It is drama: Like a play divided into acts and scenes, a game is divided into groups of threes: early, middle and late innings, and in each inning, three outs, and in each at-bat, three strikes. There is an aesthetic symmetry at work, like the formal plan of the best theater.

And each subset of the game has its own exposition, crisis, climax and denouement. Each pitch, each at-bat, each inning, each game, each homestand, each season, each career, and the whole long toss from Abner Doubleday to this year’s rookie. Wheels spinning within wheels.

It is poetry: Each game has its own rhythm, and there is the rhyme of inning-couplets. It is poetry, too, in the grace and beauty of the slide into second base, the suddenness of the unassisted triple play, the conjunction of time and space that meets for the play at the plate.

“Man may penetrate the outer reaches of the universe, he may solve the very secret of eternity itself,” said baseball’s greatest owner, Branch Rickey, “but for me, the ultimate human experience is to witness the flawless execution of a hit-and-run.”

It is history: Part of this is the historical hold baseball has held on the American imagination. If it is losing its grasp in the new century, for the past century, baseball was America.

But it is also the fact that baseball’s gaze is the long gaze over decades and centuries. In football, every new hotshot is a headline. In baseball, every accomplishment is measured against Ruth, Gehrig, Mays, Musial, Williams. There is a continuity in baseball that rivals continuity of genealogy or language. Football may keep us in the moment; baseball connects us with the past and reminds us that we are sons as much as we are fathers. Granddaughters as well as grandmothers.

But more than that, baseball is a metaphor for life.

“It’s about entering the game young and innocent and leaving older and wiser,” says Arizona Republic columnist E.J. Montini. “That’s what baseball has that football never will.”

Or, as the greatest baseball poet said — that would be Vin Scully, longtime Dodgers announcer — it has “the mathematical precision of the game moving with the kind of inevitability of Greek tragedy. With the Greek chorus in the bleachers.”

What makes it Greek tragedy, too, is its acknowledgment of failure. Baseball is the game where the best players are expected to fail two out of three times. There is doom in the game.

“Baseball is a lot like life,” said one-time Mets secondbaseman Ron Kanehl. “The line drives are caught, the squibbers go for base hits. It’s an unfair game.”

Cubs fans and Red Sox fans aren’t the only ones who have learned to live with years of disappointment; it is the nature of the game.

Giamatti wrote poetry. Can you ever in your wildest imagination conceive of former NFL president Pete Rozelle doing so?

Talk of breaking your heart, is there any moment in sports more wrenching than Lou Gehrig’s farewell speech: “Today, I consider myself the luckiest man on the face of the earth.”

This is the stuff of tragedy. Life, death.

As Scully once said, “It’s a mere moment in a man’s life between the All-Star Game and an old-timer’s game.”

It is important to note that Barber or Harwell or Scully never, ever, seemed like they were trying to write poetry. Their figurative language and metaphorical approach is the natural language of baseball.

In the ninth inning, as the great southpaw Sandy Koufax worked toward his perfect game in 1965, Scully’s play-by-play caught the teeth-gnashing excitement of one of sport’s mightiest accomplishments in a masterpiece of wordcraft. It has been anthologized many times, and it was a first draft, live, extempore: “There’s 29,000 people in the ballpark and a million butterflies,” he said.

It is only natural, then, that writers, playwrights, painters, sculptors, poets and above all, filmmakers have turned to baseball. It is all there, waiting to be mined.

“Is there anything that can tell more about an American summer than, say, the smell of the wooden bleachers in a small-town baseball park, that resinous, sultry and exciting smell of old dry wood,” wrote Thomas Wolfe.

Or as eventual Hall of Famer Rogers Hornsby answered when asked what he does in winter when there is no baseball:

“I’ll tell you what I do,” he said. “I stare out the window and wait for spring.”