It is one of the eeriest sights I have ever seen: miles and miles of dense, spiky artichokes, looking like a carpet of green sharks’ teeth on the hillsides. It seems like the kind of alien vegetation a Hollywood art director would design for a Star Trek sequel set on some lush, hostile planet where the foliage dines on people in a nice vinaigrette.

As you drive inland from Monterey, you run across the characteristic pattern of California agriculture. Instead of small, mixed-product farms, you have specialized industrial production.

So that the area near Castroville is all nettled with artichokes and up the road, you pass through towns claiming to be the ”mushroom capital of the world” and the strawberry capital, followed by fields of broccoli, orchards of apples and, finally, the town of Gilroy, around which grows 90 percent of the world’s garlic.

But that’s not the way farming began in the Santa Clara region.

Exactly 200 years ago, a Roman Catholic mission was built at the foot of the Gabilan Mountains, overlooking a broad flat valley. San Juan Bautista was the 15th mission built in California in a series that attempted to space them a single day’s journey apart, from San Diego to Solano, north of San Francisco. Eventually, 21 missions were built.

A portion of their original connecting ”Camino Real,” or Royal Road, is still visible near the mission, named after John the Baptist.

In May of 1797, a detachment of six Spanish soldiers arrived in the area and began construction. They built a chapel, a granary, a rectory and a guardhouse.

One month later, Father Fermin Lasuen came to the new mission from San Jose and dedicated the site.

As with other missions, its goal was to baptize local Indians and spread the word of the Church. By the year 1800, there were more than 500 Indians, from most of the 23 nearby tribes, living in the mission and farming the land around it.

Also in that year, the first major recorded earthquake hit and devastated the compound. A second church, which eventually became the largest in the series, was begun. The church of San Juan Bautista, in the small town of the same name, had a long nave and two aisles, unheard of in California when it was completed in 1812.

It is still an active parish church, although it is also a tourist attraction, with a small museum and gift shop.

The Church is advised to build on rock and not on sand, but the biblical injunction fails to make note of plate tectonics: San Juan Bautista’s nearest neighbor is the noted San Andreas Fault. As you stand near the mission’s large front doors, you can look out over the green valley behind the church and see the odd, torn ground surface, scars of grinding geology.

The mission has suffered numerous tremors. In the Big One of 1906 that most people call the San Francisco Earthquake, San Juan Bautista’s side walls collapsed. The aisles were abandoned and the central nave bricked up to make a much narrower church. It wasn’t until 1976 that the original floor plan was restored when piles of old, crumbled adobe were recycled and made into new bricks for the project.

The mission is also known by millions of moviegoers as the location for the church-tower acrophobia in Alfred Hitchcock’s Vertigo, when Jimmy Stewart tries to save Kim Novak.

But there are odder episodes: One-eyed stagecoach driver Charlie Parkhurst lived in the town that grew around the mission. Charlie was born as Charlotte and picked up the masculine habits of cussing, tobacco chewing and firearms and later became — 50 years before women’s suffrage — the first female to vote in California, although the truth of the matter wasn’t known at the time. 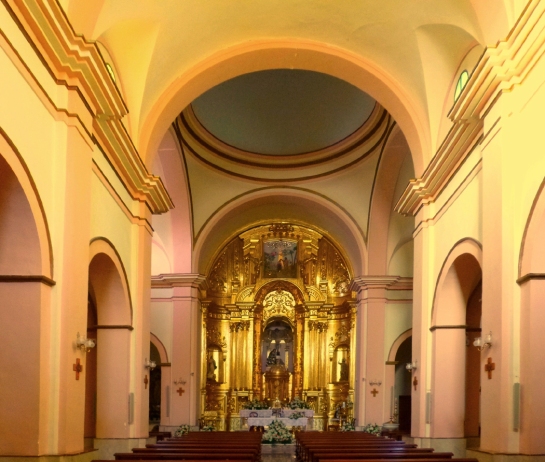 But that can’t really be said to be the most peculiar incident in the mission’s history. That palm goes to the story of a hurdy-gurdy’s military use.

In 1828, the mission acquired an English barrel organ. That is one of those ”music box” instruments that makes music with a large rotating cylinder covered in a pattern of protruding pins. It is an impressive thing, with mock organ pipes showing on its front through Gothic wooden tracery.

One day, some hostile Tulare Indians attacked the mission, roaring into the compound. An alarm was sounded, but the place was essentially unarmed. The padre had one last desperate idea and brought out the barrel organ and began cranking.

The Indians stopped cold and began singing. And then they decided they liked the music so much, they laid down their arms and decided to stay at the mission.