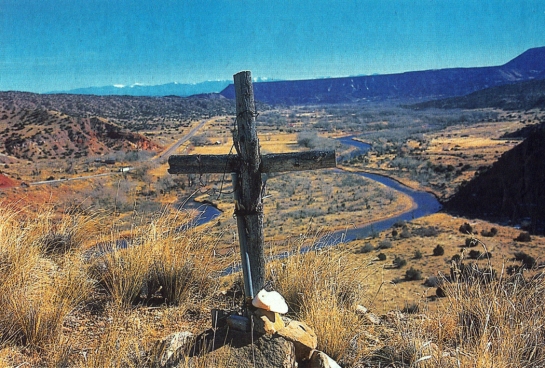 You can’t drive up the Chama River Valley in northern New Mexico and not feel the snap of recognition.

It doesn’t matter whether you’ve ever been there before, it looks familiar. The reason is not hard to guess.

It is this area north of Santa Fe that painter Georgia O’Keeffe recorded in her work, beginning in 1929, when she first started to visit the state with regularity.

”This is wonderful,” O’Keeffe said on first seeing the sage and sandstone landscape. ”No one told me it was like this.”

The surprising thing is that so little seems to have changed. You can still see the adobe churches, the penitente crosses, the occasional cow skull with its corkscrew horns. All of which became familiar icons in O’Keeffes paintings. 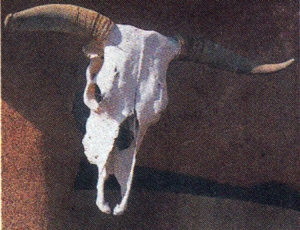 In fact, a drive up U.S. 84 from Espanola to Abiquiu is as close as you will ever get to driving through an O’Keeffe painting. It is all around you.

Although O’Keeffe is permanently associated with New Mexico, she was born in Wisconsin in 1887. Her family moved to Virginia when she was 14 and she later studied art in Chicago and New York.

She first achieved note as a painter in New York at the art gallery run by Alfred Stieglitz, who later became her husband.

She took solo vacations to the West for many years, leaving Stieglitz behind and renting and then buying property, first at a dude ranch called the Ghost Ranch about 65 miles north of Santa Fe, and later in the tiny village of Abiquiu (Aba-cue) about 15 miles south of that.

Her paintings, which simplified and mythologized the land around her, have become iconic for both Americans in general and women in particular she was one of the first women whose work was taken seriously in the ”man’s world” of art.

The stretch of U.S. 84 from Espanola to the Echo Amphitheater, north of the Ghost Ranch, offers the most insight into O’Keeffes work. You can see just how she translated what she called her ”back yard” into paint.

”I wish you could see what I see out the window,” she wrote to a friend in 1942. ”The earth pink and yellow cliffs to the north the full pale moon about to go down in an early morning lavender sky behind a very long beautiful tree-covered mesa to the west pink and purple hills in front and the scrubby fine dull green cedars and a feeling of much space It is a very beautiful world.”

O’Keeffe was a stubborn woman, and she stubbornly refused to leave this life until she was a few months short of turning 99.

”When I think of death,” she wrote, ”I only regret that I will not be able to see this beautiful country anymore … unless the Indians are right and my spirit will walk here after I’m gone.”

No one driving along the Chama River can doubt the presence of O’Keeffe’s redoubtable spirit.