As you stand in the grassy expanse of the Great Plains, you are forced to confront them, Einstein’s two-faced god, the Janus of existence.

You stand at the stony edge of a low bluff and look out at a sea of grass and the cloud shadows racing over the buttes in Colorado’s Pawnee National Grassland, wetting them and drying them with shade and sun.

You feel yourself alone in the circle of the horizon — dead center in the universe of your own perception — and know, in a way you never do in the city, that you are alive on a planet.

Pawnee National Grassland is about 90 miles northeast of Denver. Within a 30- by 60-mile area just south of the Colorado-Wyoming state line, the Pawnee National Grassland encompasses old short-grass prairie and reclaimed farmland. The area is crossed mainly by unpaved roads, and the birds peel off from the side of the road as you drive by like the wake of a motorboat.

Sunflowers yellow the barbed wire on the shoulders of the roadway. Hordes of sunflowers, bobbing in the wind that is always exhaling.

It is easiest to get to the National Grassland from Denver. Usually, when we think of Denver, we think of the Rocky Mountains that loom above the city, but that is only if you face west. If you face east, Denver is the gateway to the Great Plains — the vast fifth of the United States that houses less than 3 percent of its people.

The mountains are beautiful, but in a conventional way: Everyone can recognize their looks. But the Great Plains have a deeper beauty, and only those who spend time in this space can be gifted with seeing it.

As Walt Whitman wrote, “I am not so sure but the prairies and plains, while less stunning at first sight, last longer, fill the esthetic sense fuller, precede all the rest and make North America’s characteristic landscape. Even the prairie’s simplest statistics are sublime.” 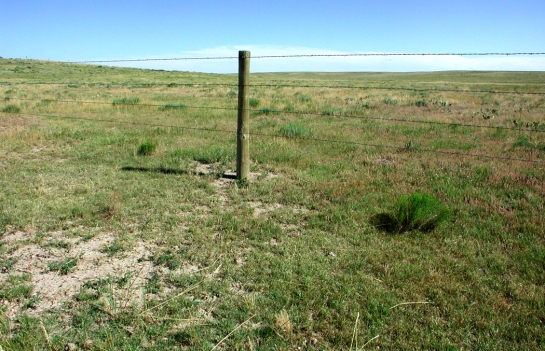 This region of northeastern Colorado was the subject of James Michener’s 1974 book, Centennial, and the history of the place was fictionalized in his tale.

But the real story is hardly less compelling. The prehistoric seas gave up the sea bottoms to become the middle of the continent. Dinosaurs, and later the great Cenozoic beasts, inhabited the area. Then there were Indians and buffaloes.

Finally, the buffalo hunter, the railroad, the cattle industry, the dry farmer, the droughts, the financial busts, the Dust Bowl, the emigrations and the land remaining like the butt end of a used cigarette.

You can feel all that history in the grass under your boot sole.

By the mid-1930s, this portion of Weld County dropped to a tenth of its pre-Dust Bowl population.

That’s when the federal government and its Work Projects Administration tried to stabilize the economy, and the government began buying up plots of land. In 1938, responsibility for administering the land fell to the Soil Conservation Service.

In 1960, the Pawnee National Grassland was created. It is divided into two sections, each roughly square, just north of Colorado 14.

The town of Briggsdale sits to the south of the road in the western sector. The towns of Buckingham and Raymer do the same in the eastern sector. They hardly qualify as towns: more like a collection of farm buildings, a few houses and maybe a grange hall.

The western sector contains the only campground, the Crow Valley Recreation Area, which sits in a depression of cottonwoods along Crow Creek.

“They were extraordinary, these two sentinels of the plains. Visible for miles in each direction, they guarded a bleak and silent empire,” he wrote. 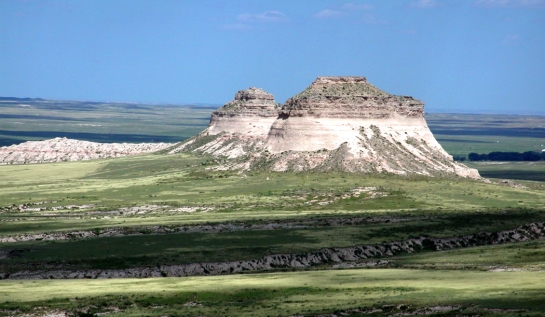 Getting to them requires a commitment. You have to drive on dirt roads about 15 miles, switching roads several times. It would be easy to get lost without a map. Get a map — available at a ranger station near Briggsdale.

You will pass Keota, a Dust Bowl ghost town, on the way. In its heyday, just after World War I, there were 140 people living there. Now, there are a few holdouts in the few remaining buildings.

Oil was found in the area in 1924, but that didn’t save the town. Even now, there are some oil pumps in the grasslands.

Between cattle grazing and mineral rights, the grasslands more than pay for themselves: 25 percent of oil and gas revenues are returned to Weld County for roads and schools. A similar percentage comes from grazing rights.

But mostly the treasure to be found is in the wildlife: 301 species of birds; 400 species of plants. There are deer and pronghorns, prairie dogs, rattlesnakes.

But for those who feel the atavistic call of the savanna, the veldt, the steppes, the pampas, this reminder of the tawny places in Africa that humankind came from, the grasslands speak volumes.

Grasslands, which cover 40 percent of the Earth’s surface, are home to almost 1 billion people.

Too often overlooked by tourists, who just want to get through the expanse as quickly as possible, the grassy middle of the country is, instead, what they should be looking for.

Here you stand in a field of grasses that billow in the wind, with the same horizon you gaze at sea, and the same sky, and you recognize, more than in other landscapes, that each point in the endlessness is its very center.

It is the source of our national identity. It is the West we think of as our coming of age. It is the cradle of our greatest authors, the heart of our economy: the “amber waves of grain” and the “fruited plain.”

And a sense of the bigness of the planet.