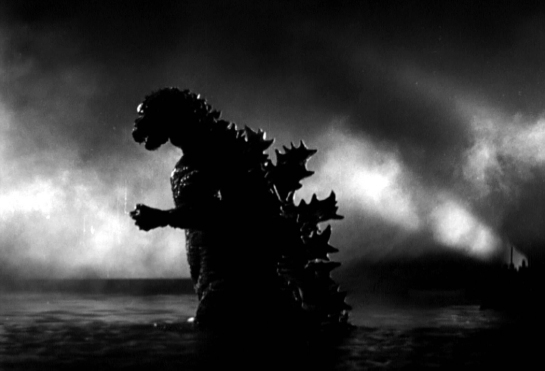 Who knew Godzilla was an art film?

Those of us who grew up on the American re-edit with Raymond Burr jimmied in remember it most fondly as one of the campier entries in the 1950s-era giant mutant monster genre: Godzilla: King of the Monsters. A man in a rubber dinosaur suit stomps on a model-train layout, crushing cardboard buildings.

That version, released in 1956 and badly — even comically — dubbed, was aimed at kiddies and the drive-in market. The basic story is familiar, recycled not merely from The Beast From 20,000 Fathoms (1953), but from older classics such as King Kong (1933) and the 1925 silent film Lost World. In all of these, a dinosaur or other prehistoric monster is found alive in modern times, wreaking havoc on a major city until it is subdued by modern science or a well-equipped military.

Godzilla, played over and over on TV, became a classic of its genre, but we all sensed that underneath, there was a Japanese original that we never knew. It was rumored to be a quite different film, and now that is available on DVD and Blu-Ray, and cleaned up by the people at Criterion, with a new transcription of its title — Gojira — we can see for ourselves.

The real models for Gojira were Hiroshima, Nagasaki and the more recent (at the time) case of the Japanese tuna fishing boat Lucky Dragon Five, which was caught downwind of the U.S. Castle Bravo nuclear test at the Bikini Atoll.

It is a revelation: Ishiro Honda’s original film (in Japanese and subtitled) is a moving anti-war and anti-nuclear parable, and its intended audience is adult, not juvenile.

The film is still a victim of its minuscule budget, and some special effects are laughable — hardly more sophisticated than in a Gumby cartoon — and not all the acting passes muster. But these faults can also be found in the rarefied art films of both Pier Paolo Pasolini and the fountainhead of Italian Neorealism, Roberto Rossellini.

In fact, Honda’s film shares a visual aesthetic with Rossellini — the style is meant to be almost documentary. And the style serves the subject well: This isn’t a monster film, but a film about the devastation and suffering of war.

Made only eight years after the end of World War II, the effects of the incendiary bombing of Tokyo and the nuclear bombing of Hiroshima and Nagasaki were even fresher in Japanese minds than the World Trade Center is now in American minds. When the Japanese audience saw Gojira in 1954, they saw a vision of cities flattened and burning, with hundreds, thousands of maimed people on stretchers in bandages, waiting for care and moaning in pain. It must have raised the hair on their necks.

The scenes in the movie are lingered over — and largely trimmed out of the American version — and they are accompanied not by the rapid pulse of a Hollywood sound score to pump up our energy level, but by the elegiac strains of funeral music. The score, by composer Akira Ifukube, is one of the great film scores of all times, deeply affecting; it’s hard to hear it, even without the visual, without a profound sadness welling up from inside.

In Hollywood thrillers, people may die by the boatload, but there are seldom corpses to clear away. They are somehow forgotten about. Not in Gojira. They are in our face. 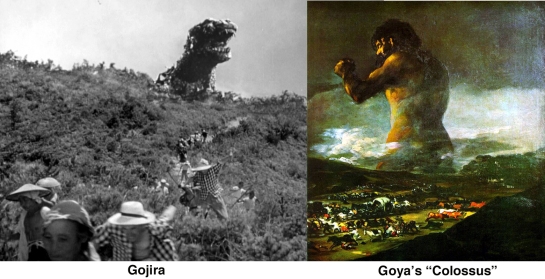 Gojira winds up being a metaphor of war and its horror, much like Picasso’s Guernica. And the first time we see Gojira, looming over a hillside, he looks uncannily like Francisco Goya’s late dark painting, Colossus, in which a giant stalks the war-torn countryside. 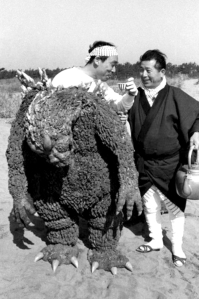 A break in filming

The DVD includes both versions and fascinating extras, like a description of the “Godzilla suit” used to create the monster.

The original film should be seen by anyone who cares deeply about cinema. It isn’t the joke we thought it was. It is art.