Faulkner’s fictional county began in the 1820s with the first white settlers and an Indian named Doom. The real Oxford was founded in 1833; 11 years later, the University of Mississippi opened for business. There are many similarities between the fiction and the reality, and not the least of them is the way progress seems to have obscured the the old ways that Faulkner felt were the heart of the South.

The town of 20,000 still radiates out from the central square, where an old, large courthouse still stands and is still the central political and legal fact for the county.

But unlike Jefferson, Oxford is a college town and the existence of Ole Miss changes the equation radically. For one, there are bookstores in Oxford.

And, when you stay in the motel at the edge of town, the nearest restaurant serves Orange Roughy with Cilantro Salsa — an Eastern attempt at Fish Veracruz — and Pork Chops Stuffed with Morel Mushrooms and Pine Nuts.

And what is worse, the trendy, warehouse atmosphere with its scrubbed concrete floor and unfinished wood handrails, is home to waiters brandishing pepper grinders, who say, “Good evening, my name is Brian and I’ll be your server tonight.”

So, it can be disappointing, if you go to Oxford to find the flavor of the Compsons, Sutpens and Snopeses.

The courthouse square, where the town used to buy its dry goods, hardware and groceries, now houses restaurants, sportswear shops and a very fine bookstore with a very fine section of Faulkner first editions. 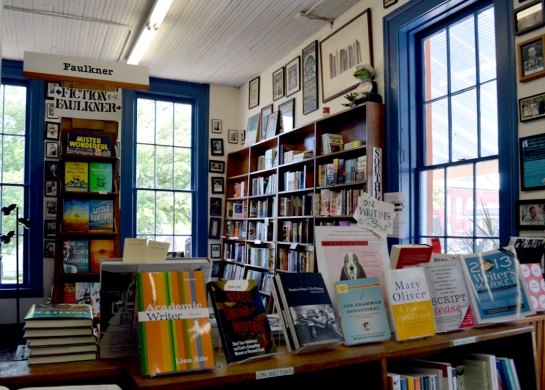 Upstairs is a coffee bar and tables, where students and tourists mix while reading the morning paper over a cup of hazelnut mocha. 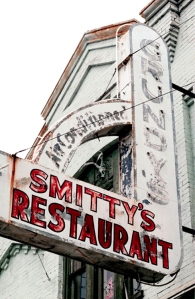 But if you could walk back in time just a few years, you would find a little shopfront cafe called Smitty’s. In the early morning, it would be filled with courthouse lawyers and snappy waitresses, drawling conversation accompanied by the music of clinking glasses being racked in the kitchen.

At Smitty’s, the waitress still called you “Honey,”’ and meant it. The biscuits were still smothered in white sausage gravy and the buttered grits were always salted and peppered.

And the weathered faces of the Old South still gathered for their morning cup of coffee and the local gossip.

When I was there once, in 1994, one particular and dignified gentleman caught my eye. He must have been 75, with thin white hair combed so the furrows left by the comb were clean lines. He wore a striped tie and a dark blue suit that his frailing limbs couldn’t quite fill out anymore. He also wore bifocals and talked in that sweet, subdued aristocratic drawl.

He was natty in a way only very old, very respectable Southern men can be.

At first, he shared the next table with three other men who we learned were lawyers from the courthouse. The blue suit was a judge.

But more and more men filed in and eventually, they all gravitated to one wall, where several tables were lined up end to end. There must have been 20 or more lawyers, all talking and laughing and keeping each other amused with good ole stories and friendly joshin’.

The judge sat dead center at the row of tables, the obvious center of gravity. The surrounding lawyers looked almost like apostles at the Last Supper.

The old man might as well have been Judge Sartoris. He could have come straight from the pages of Sanctuary or Intruder in the Dust. You could sense he knew not only everyone in town, but knew their granddaddy.

But there were also things that had changed: A few of the lawyers were black.

Smitty’s is gone now, replaced first by a yuppified eatery called 208 South Lamar, after its street address, and currently by a Mexican restaurant.

But even with the changes — in some ways, Oxford is impossible to tell from any other university town, whether Chapel Hill, N.C. or Charlottesville, Va. — but the building now occupied by La Paz, formerly 208, formerly Smitty’s, and before that Grundy’s, and before that other bars and restaurants, was built in the 1880s, and despite the frequent facelifts, the past is still there underneath.

Those who don’t understand it laugh when you tell them that in many ways, the South is more civilized than any other region in the country. They shouldn’t. While the rest of the nation is fragmenting culturally, the South is holding on, however tenuously, to the culture and history that made it what it is and that Faulkner chronicled.

In New York, history is a subject taught in school; in Mississippi, history is your grandfather.