I recently came across a photograph of my second grade class and something odd happened.

I hadn’t thought of these young faces in more than 50 years. Yet, as I looked into their faces, their names popped into my brain. Where those names and faces had been stored, I have no idea: some forgotten warehouse in my mind, like the scene at the end of “Lost Raiders.” These were faces from nearly 60 years ago, and in their fresh-faced innocence, they barely show the traces that would line them even in their eighth grade graduation photo. 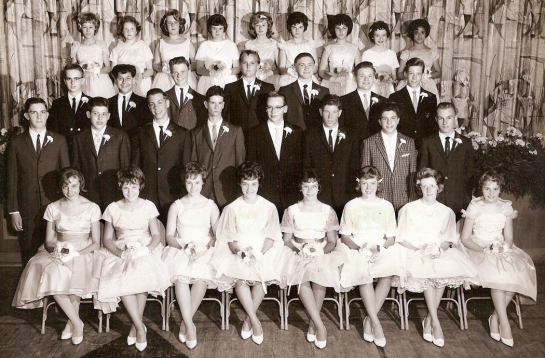 I left behind my life in New Jersey four years after that second photo, going off to college and what seemed to me to be “real life.” I wanted to forget New Jersey — more exactly the banality I saw in the suburban stultification of my home state — and dive into the deep end of art, music and poetry.

But now, a half-century later, I saw the faces in that picture and names I have not uttered in 50 years reappeared magically, jogged out of the synapses of my brain like dust between the floorboards.

What connects, ourobouros-like, our lives now with our lives then? The disconnect seems immense: There is so little of then that survives into my now; yet, the person — the sensibility I am — is a continuous existence, a line drawn without the pencil once being lifted off the page.

There is a danger, when looking back, to fall into the miasma of nostalgia. You see it all over the internet: “Share if you remember when the milkman delivered milk to your door?” and “Remember when cars had running boards?” Rotary phones? Party lines? As the American population has aged, PBS stations ask for money to a soundtrack no longer of septuagenarians playing Glenn Miller standards, but now to septuagenarians singing doo-wop music and recalling, with a wistful gaze on their faces “the music of our times,” as if this shared experience created an us-vs.-them world in which we remain the good guys, who really knew the score, and they are the johnny-come-latelies who have ruined it all.

So, it is easy to make fun of the elderly, watching reruns of Lawrence Welk and wishing music still had melody, like the tunes of Patti Page and Perry Como. Or the Beatles and Barry Manilow. Or, sometime in the future, of Nirvana and Coldplay.

Nostalgia is a trap we should avoid. The past was not better than the present; it was different. I, for one, would not wish to retreat to a time when segregation was enforced by police, when women had to wear girdles, and when everyone, everywhere, at every hour of the day, sucked cigarettes.

What interests me in that second-grade photograph is not a warm, fuzzy nostalgia, but a hard, difficult and confusing problem: How much of that is me, is still me? How complete is the link between that little boy and this old, bearded senex? What is the mechanism of selfhood? How come a flash glance at an old picture can fire off a neuron after a half century and cough up the name of a Linda Muth or a Lenny D’Angelo. Why do those names persist in the neurobiology of a 67-year-old writer, who has left them all behind? And what else is buried under a lifetime of experience, ready to be excavated by a chance trigger?

A few years ago, my wife and I were visiting her hometown in North Carolina. We stopped at a gas station to refill the car and she got out to go into the quickie-mart. Inside, while standing at the cash register, a voice called out behind her, “Carole Steele, do you remember me?” She turned around and saw an old man, cue-ball hairless, nearly toothless, with a vast beer belly and dressed in denim overalls — clearly an old farmer. “Thomas Bullins,” she said, in instant recognition. “What happened to your red hair and your freckles? And how did you recognize me?” Carole was now 70 years old. “Your hair,” he said. When they were in the first grade, little Tommy Bullins used to steal the ribbons from Carole’s pigtails.

He smiled that toothless smile, and Carole reached up and kissed him on the mouth. Some vast and unnamed chasm had been spanned in an instant.

What traces of the six-year-old Tommy Bullins remained on the wrinkled, pudgy, puffy, weathered face that Carole could see so immediately? “There is an X on the faces of all the Bullinses,” she says, “that I saw in the gas station.” Not an actual X, but a lineup of features that suggested an X there, that signaled that this was Tom Bullins.

I don’t know the mechanism for memory. I’m not sure anyone does. But I know its persistence, and I know that somehow that persistence is necessary for the development of a self — that sense that the boy is truly father to the man, that the me in New Jersey 60 years ago is the same me in the mountains of North Carolina now, despite all the midden of experience that has piled on in the intervening years. Would my mother recognize the little boy in me now? I know that Carole recognizes the little girl in her 50-year-old daughter; in fact, she hardly recognizes that Susie is all grown up.

We push through time like snow plows, leaving a cleared path behind us. That wake is our selfhood.

Through Facebook, I recently reconnected with a boy (now man) I first met in kindergarten at the Henry Wadsworth Longfellow Elementary School in Teaneck, N.J. He now lives on the other side of the continent. When my family moved from Teaneck to Old Tappan and I began the second grade at Charles De Wolf Elementary School in Old Tappan, he was there, too, his family having also moved. This makes him the person outside of family that I have known the longest.

The contact brought up a welter of memory, of playing in a rhythm band in kindergarten, of taking those daily naps on the classroom floor, of seeing him and other classmates singing “Sailing, sailing, over the bounding main,” and of walking every day — at five years old — the half mile from home to school, and later, walking back. The entire geography of my tiny life was back before me: the A&P I passed on the way, the firehouse on Morningside Drive, the ballfield outside Longfellow school, the deli, the stationery store, the old grocery with its sawdust floor, the Italian pushcart merchant that wandered up Farrant Terrace calling out his wares, the two collies that lived down the street that scared my younger brother, who thought they were lions — the inside of the closet in my home, with its lathe-and-plaster walls. A whole world wells up. Where has it been sitting? Why is it all buried in there?

A few years ago, I began an autobiography, not for publication, but to share with my brothers in a group project: They would write theirs, too, and we would get to know each other better — what they had done after leaving home for college, and we lost daily contact.

The thing that most astonished me about the writing was that every memory I retrieved was a room with three other doors, and behind each of those doors was another room with three more doors, on and on, like some Borges story. I was dumbfounded at the amount of information that was still there to be recovered. Many were not anecdotal stories, but rather, sense memories, bits of things and locations that fell back into place when recalled.

It must be the same for everyone. I know that when I ask my wife to tell me about her childhood, she can go on for an hour and we have to stop, but the next day, we can start again and there is an endless stream, an bottomless well of material. In her case, it sounds all like a Faulkner novel and I have tried to write it all down. A fool’s errand: There can be no “all,” because it never seems to end. I write it into my laptop as fast as she can speak it, but I’ll never have the time to go back and edit the notes, because the next time, there are all-new stories, and another cast of characters.

I want to save as much as possible, not for publication, but for the sake of our grandchildren, so they can have some sense of their grandmother. If her stories can become part of their memories, then their interior lives can retreat five generations, back to Carole’s grandparents, who were so central to her life.

In the end, this has given me a powerful sense of the onflow of life, of the piling on of detail, of the continuity, not merely of selfhood, but of family, of history: a line that Carole calls “the long man,” which reaches back past Eve and Adam, past Homo habilis, back to our reptilian life, back to our eukaryotid beginnings, all a wholeness. Ontogeny recapitulates phylogeny.

I see the scrubbed face of my old picture, holding my favorite ball, and I see myself now, aged and worn, and there is an odd reversal: The baby photograph is now six decades old and the ancient me is brand new. And in some inexplicable way, they are the same.