I love travel, and next to that, reading about it. But most of what I read leaves me flat; most travel writers upholster their pages with supposedly useful bits of information meant to lead me to a favorite hotel or a great nude beach where I can buy the killer margarita.

Most travel writing is in essence consumer news, and consumerism is both shallow and boring. That is not what I seek when I open up a book. I want to be transported to the place the author writes about; if I cannot afford the airfare, I want the words on the page to vanish, leaving me underneath the palm trees or on the mountain crest. I want to feel the moist tropical breeze on my cheek.

The best writing is not about four-star restaurants, but about the experience of the place, whether hotel or Irish bog. I have found that happens most often not in the works of so-called travel writers, but in the works of those who are writers first, travelers only by happenstance. 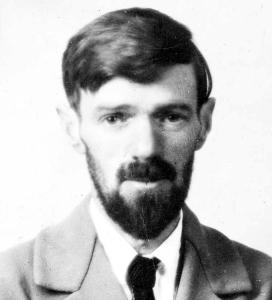 That is because, ultimately, the travel experience happens not on the ground, but in the head. It is the digestive sensibility of a great writer that can suck the marrow out of an experience and present it to us for our own understanding and enjoyment.

”One says Mexico: One means, after all, one little town away south in the Republic,” wrote D.H. Lawrence in Corasmin and the Parrots. ”And in this little town, one rather crumbly adobe house built round two sides of a garden patio; and of this house, one spot on the deep shady veranda facing inwards to the trees, where there are an onyx table and three rocking-chairs and one little wooden chair, a pot with carnations, and a person with a pen.” 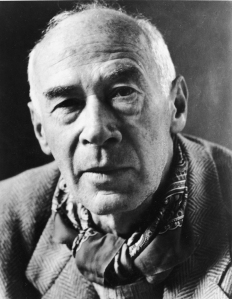 Henry Miller opens up his wonderful travel book, The Colossus of Maroussi, saying, ”I would never have gone to Greece had it not been for a girl named Betty Ryan who lived in the same house with me in Paris. One evening, over a glass of white wine, she began to talk of her experiences in roaming about the world. I always listened to her with great attention, not only because her experiences were strange, but because when she talked about her wanderings, she seemed to paint them: Everything she described remained in my head like finished canvases by a master. It was a peculiar conversation that evening: We began by talking about China and the Chinese language, which she had begun to study. Soon we were in North Africa, in the desert among people I had never heard of before. And then suddenly she was all alone, walking beside a river, and the light was intense and I was following her as best I could in the blinding sun, but she got lost and I found myself wandering about in a strange land listening to a language I had never heard before. She is not exactly a story teller, this girl, but she is an artist of some sort, because nobody has ever given me the ambience of a place so thoroughly as she did that of Greece.”

Miller then turns that favor over to us in his book. It is not just about a place, but about how a particular and intelligent sensibility interacts with a place.

Sometimes that happens in a novel, such as Jack Kerouac’s On the Road or Herman Melville’s Typee. These give us such a strong sense of being there that the plot sometimes seems little more than an excuse to travel to a new place to feel unfamiliar weather and sunlight.

But it is on their books specifically about travel that I mean to write. I’m sure you have your favorites, just as I have mine. Try some of these out next time you can’t afford two weeks in Tahiti:

1. Sea and Sardinia, by D.H. Lawrence. ”Comes over one an absolute necessity to move. And what is more, to move in some particular direction.” His other travel books are just as direct, just as full of the feeling of life and energy, populated with odd and compelling personalities. Mornings in Mexico, Twilight in Italy, Etruscan Places — if I were to name the single best travel writer, it would be Lawrence. 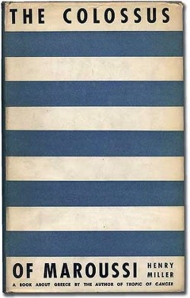 2. The Colossus of Maroussi, by Henry Miller. Forget the four-letter Miller of the Paris gutter. His vision of Greece, uncorrupted by pious Classicism, is all about location, location, location. His American travel books, The Air-Conditioned Nightmare and Remember to Remember, are more episodic, but still among his best work.

3. The Encantadas, by Herman Melville. ”Take five-and-twenty heaps of cinders dumped here and there in an outside city lot; imagine some of them magnified into mountains, and the vacant lot the sea; and you will have a fit idea of the general aspect of the Encantadas, or Enchanted Isles.” Melville takes us to the Galapagos Islands and gives us all we know of them outside of Darwin.

4. The Narrow Road to the Deep North, by Matsuo Basho. The greatest writer of Japanese Haiku takes us on a walking tour of the northern portions of Edo-period Japan. ”Days and months are travelers of eternity. So are the years that pass by. Those who steer a boat across the sea, or drive a horse over the earth till they succumb to the weight of years, spend every minute of their lives traveling.”

5. The Desert, by John C. Van Dyke. One of the most peculiar books ever written, it is the love letter of an obsessed stalker to his beloved Southwest deserts. Written in 1901, it is full of the most effulgent language ever put to paper. And it would be pure breathless kitsch if every word weren’t the most truthful and accurate observation of the land.

”The reds are always salmon-colored, terra-cotta or Indian red; the greens are olive-hued, plum-colored, sage-green; the yellows are as pallid as the leaves of yellow roses. Fresh breaks in the wall of rock may show brighter colors that have not yet been weather-worn, or they may reveal the oxidation of various minerals. Often long strata and beds, and even whole mountain tops show blue and green with copper, or orange with iron, or purple with slates, or white with quartz. But the tones soon become subdued. A mountain wall may be dark red within, but it is weather-stained and lichen-covered without; long-reaching shafts of granite that loom upward from a peak may be yellow at heart but they are silver-gray on the surface. The colors have undergone years of ‘toning down’ until they blend and run together like the faded tints of an Eastern rug.”

6. Travels, by William Bartram. The full title gives us the wonderful 18th-century flavor of the book: Travels through North and South Carolina, Georgia, East and West Florida, the Cherokee Country, the Extensive Territories of the Muscogulges, or the Creek Confederacy, and the Country of the Chactaws; Containing An Account of the Soil and Natural Productions of Those Regions, Together With Observations on the Manners of the Indians, Published in Philadelphia, 1791.

It is my favorite of any number of similar books that follow the author through what was at the time unknown and miraculous new territories. Jonathan Carver’s Travels through North America, from 1778, or William Dampier’s A New Voyage Around the World, from 1697, are full of ”travelers’ tales.”

Later, the journals of Lewis and Clark and of John James Audubon are full of the same sense of being there.

7. Life on the Mississippi, by Mark Twain. Such a classic, it hardly needs touting, but there is no more completely compelling vision of a river and the life that survives because of it.

8. California and the West, by Charis Wilson Weston. The reason most people pick up this book is for the historic photographs by Edward Weston. But the stories his wife, Charis, tells about their travels while making the photographs are a complete delight and present a picture of America between the wars with dusty roads, bad food and cheesy tourist traps.

9. Italian Journey, by Johann Wolfgang von Goethe. The great German writer and natural philosopher managed to get into the spirit of Europe’s sunny south by meeting a bunch of Germans in Rome and rhapsodizing about Classical civilization. It is a funny, moving and infectious memoir, and I can’t put it down.

10. A Week on the Concord and Merrimack Rivers, by Henry David Thoreau. This is only one of several quirky and idiosyncratic travel books by the Transcendentalist author. You could as well choose The Maine Woods, Cape Cod or A Yankee in Canada. How idiosyncratic? ”I fear I have not got much to say about Canada, not having seen much; what I got by going to Canada was a cold,” he writes. He also lies. He has got much to write about Canada.