Open a bottle of champagne and leave it out, and by morning it is flat and stale.

Opening up a prehistoric cave can be like that. Lascaux caves in France, with its menagerie of animal paintings, lasted for nearly 20,000 years intact. It was discovered (or more properly, rediscovered) in 1940 and after the war, was opened to tourists. It was soon apparent that the cave was beginning to be degraded. Lichens were starting to grow on the walls, and the huge jump in carbon dioxide levels, from the breath of all those making the pilgrimage through the caves, was joining with the calcium in the limestone to form a layer of calcite that would soon cover and blur all the imagery.

It was that, like the Heisenberg uncertainty principle, the act of observation changed what was being observed. When you open up the box with Schrodinger’s cat inside, sometimes what you find is not quote so pleasant.

The caves were closed to the public. In 1983, a simulation — a copy of the original caves — was opened as Lascaux II, and tourism heated up again. Tour guides led groups through the ersatz caverns and let us see a simulacrum of the original experience. They assure us over and over that the copy is precise down to the millimeter. 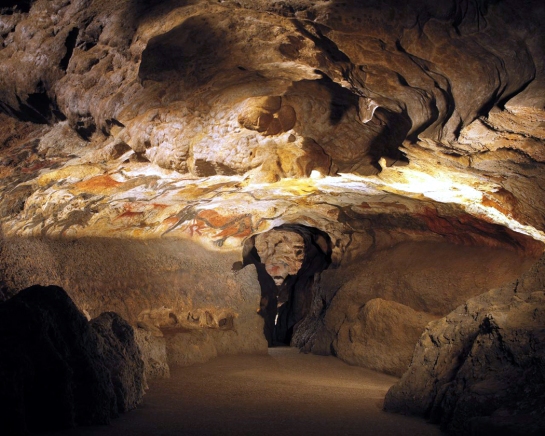 I’m a naturally suspicious person. When a shopkeeper is friendly, I allow she may indeed be very nice, but I recognize she also has a self-interest in making customers feel good.

And when I see the great cathedrals of northern France, I question whether I’m getting the vision of the master builder and his sculptors, or am getting the Viollet le Duc version and a 19th century stylization of the Gothic art and architecture. They rarely let you know what parts of a church are original and what parts have been restored. Sometimes it is easy to tell, but much of the time, it is not.

Whether it is Sir Arthur Evans at the Palace of Knossos, or reconstructed pyramids at Chichen Itza or the Carnac alignments, the work, even of dedicated and honest archeologists, is suspect.

And when we visit Lascaux II in Montignac, Perigord, France, I am suspicious of the recreation of the original paintings by a 20th century artist, no matter how well meaning.

I’m not saying I don’t believe what I see is accurate, but that I harbor a constant suspicion that it may not be.

The problem is that the reproduced paintings are so much clearer and more contrasty than the genuine paintings we saw at Font-de-Gaume.

When I asked the tour guide about it, his answer was not satisfactory, and somewhat off point.

“These paintings were drawn from accurate photographs of the originals,” he said. “And they don’t vary as much as a millimeter from the real ones.”

But it isn’t the size that I was questioning, but that the photographs taken of the real cave may very likely have had their contrast boosted to make the images more legible, and I wondered if the artist who created the facsimile might have unconsciously reproduced jiggered-up photos.

Did he visit the original cave under the same lighting conditions he painted in, and did he compare his results, not with the photograph, but with the real paintings? This is not an academic question.

Our own biases secretly creep in whenever we look at the past. It cannot be otherwise. Even the most scrupulous “reproduction” is an interpretation.

It isn’t the honesty of the reproductions that I worry about. But I remember how easily fooled art experts were by Han van Meegeren’s forged Vermeers, and how shocked I was when I first saw them, with the gift of several decades between them and me, that anyone could ever have been fooled by them. Or even the Minuet by Paderewski, that he pawned off as a long-lost dance by Mozart. In the 19th century, it sounded genuinely like Mozart to their ears, but our ears can not be fooled: It is pure Victorian kitsch. 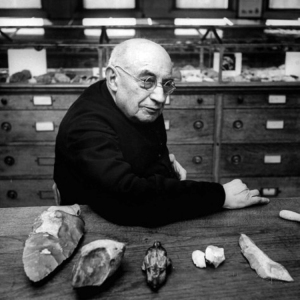 Often, in books, the images we see of cave paintings are not photographs of the original, but reproductions of drawings made of them. Abbe Henri Breuil, for instance, made many of them. He was one of the first and most influential archeologists to study the many cave paintings in France and northern Spain. But his drawings often make the originals clearer and of higher contrast. And we cannot always know if he has given us a perfect copy, or a modern interpretation.

Consider his famous drawing of a bison from the caves at Altamira in Spain. He has added the horns and has made clear what is obscure — or has made guesses at what its original makers would have wanted us to understand.

He made a famous drawing of a supposed “sorcerer” from Caves of Trois-Frères, but a simple comparison of the drawing with a photo of the original makes one skeptical of all such attempts to reproduce the cave paintings. 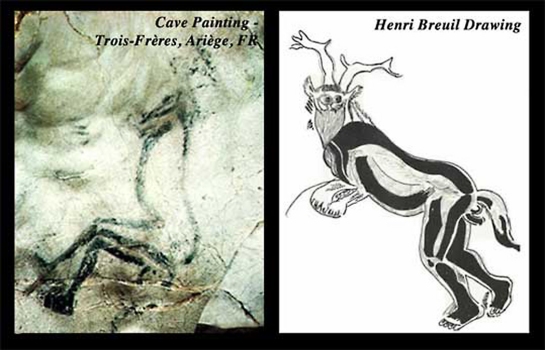 It is our own time and culture that colors what we pick from the welter of confused sense data that we see before us. We need to make sense of it, and invariably make a kind of sense that works in the confines of the culture we have been born into.

The air we breathe is invisible to us, the culture we absorb is odorless and tasteless. Only later can the habits and prejudices of one age be clearly spotted by its successor.

(It is easier these days to spot the cultural accretions from the Romantic 19th century, less easy to spot our own. One scratches one’s head at Beethoven’s Ninth Symphony, comparing when on one hand, he declares “alle menschen werden bruder” — all men will be brothers — with the “Hogan’s Heroes” march where the tenor tells us that joy is like the hero after victorious battle. Who has he battled, if all men are brothers? Clearly, the Romantics had a different, and mythic vision of war than we can ever sustain after the Somme, the bombing of Dresden or slaughter at Stalingrad. Beethoven and Schiller were certainly blind to this irony. We can never be.)

It isn’t that I think we should be allowed to visit the original Lascaux: It is clear that visitation destroys them, and I’m all for preserving them.

So, I wonder if all the latest scholarship is based on inaccurate reproductions.

Because at Font-de-Gaume, the paintings, while beautifully drawn, were noticeably low contrast, often barely legible on the walls. You had, in many cases, to acclimate your eyes to make out the bull or his eye or his horns.

In some cases, animals we were shown may be more like the fanciful shapes people make out of stalactites and stalagmites in tourist caves — “Here is the ‘ham and eggs,’” or “Can you see the elephant here?”

Our Lascaux guide assured us that the originals at Lascaux look “just like the reproductions, and are very clear,” and I have to say they look bright and legible in the photographs in the books.

In vintage photographs, the paintings look clear and contrasty.

“Font-de-Gaume was made something like 4000 years after the Lascaux paintings,” he said. “They were not the same culture.”