Werner Herzog can always give me a good chuckle. 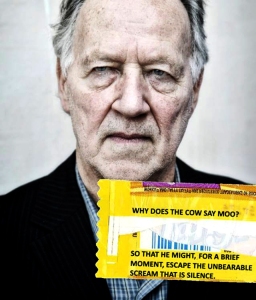 The dour German is more than a film director, he is a world treasure. If he did not exist, we would have to invent him. Just his voice, narrating a bit of documentary, or when filmed eating his own shoe, tells us that here is a man of substance, one who measures his gait against the cosmos. I will watch anything made by him, or in which he appears.

So, it made me laugh out loud when I was reading his book, Werner Herzog: A Guide for the Perplexed (conversations with journalist Paul Cronin), to see him disavow any romantic tendencies in his work.

“You can’t get a more contrary position towards the Romantic point of view than mine. Go back and listen to what I say in Burden of Dreams — the film Les Blank made on the set of Fitzcarraldo — about nature being vile and base, lacking in harmony, full of creatures constantly fighting for survival. Anyone who understands such things knows those could never be the words of a Romantic. If you’re interested in what I think about nature, take a look up into the night sky and consider it’s a complete mess, full of recalcitrant  chaos. …”

Does he know what Romanticism is? Here’s what he said in the film, talking about the Amazon jungle where he filmed Fitzcarraldo:

“The trees here are in misery and the birds are in misery. I don’t think they sing, they just screech in pain. … It’s a land that God, if he exists, has created in anger. It’s the only land where Creation is unfinished. Taking a close look at what’s around us, there is some sort of harmony. It is the harmony of overwhelming and collective murder. We in comparison to the articulate vileness and baseness and obscenity of all this jungle, we in comparison to that enormous articulation, we only sound and look like badly pronounced and half-finished sentences out of a stupid suburban novel, a cheap novel. And we have to become humble in front of this overwhelming misery and overwhelming fornication, overwhelming growth and overwhelming lack of order. Even the stars up here in the sky look like a mess. There is no harmony in the universe. We have to get acquainted to this idea that there is no real harmony as we have conceived it. But when I say this, I say this all full of  admiration for the jungle. It is not that I hate it. I love it very much. I love it against my better judgment.”

If that isn’t the very definition of Romanticism, I don’t know what is. It reminds me of the lines by Lord Byron in Manfred, when the hero is wandering the Alps in search of an escape from his suffering and guilt. He summons the spirits of nature, which are vast and impersonal. They describe nature much the same way Herzog does.

One says of nature, it is “ Where the slumbering earthquake/ Lies pillow’d on fire,/ And the lakes of bitumen/ Rise boilingly higher;/ Where the roots of the Andes/ Strike deep in the earth,/ As their summits to heaven/ Shoot soaringly forth …”

Another says, “ The star which rules thy destiny … became/ A wandering mass of shapeless flame,/ A pathless comet, and a curse,/ The menace of the universe;/ Still rolling on with innate force,/ Without a sphere, without a course,/ A bright deformity on high,/ The monster of the upper sky!”

Friedrich, The Monk at the Sea

Wanderer Above the Sea of Fog

On the next page in Herzog’s book, even he seems to admit his basic romanticism, when he admires the German Romantic painter, Caspar David Friedrich. He is “someone I do have great affinity for. In his paintings Der Mönch am Meer [“The Monk by the Sea”] and Der Wanderer über dem Nebelmeer [“The Wanderer Before the Sea of Fog”] a man stands alone, looking out over the landscape. Compared to the grandeur of the environment surrounding him, he is small and insignificant. Friedrich didn’t paint landscapes per se, he revealed inner landscapes to us, ones that exist only in our dreams. It’s something I have always tried to do with my films.”

There is a common misunderstanding of Romanticism, that it is somehow warm and fuzzy, that it has something to do with being in love. But if you read the texts, look at the photos, listen to the music, you discover that Romanticism is something dark and mysterious, placing tiny humanity in the looming shadows of a vast, hard and roiling universe. You find it in Friedrich, with his ship crushed by

Sadak In Search of the Waters of Oblivion

icebergs; or Shelley, with the depressing parade in Triumph of Life, or the spinning orbs  “intertranspicuous” grinding “the bright brook into an azure mist/ Of elemental subtlety, like light” in Prometheus Unbound; or William Blake staring down into the abyss in Marriage of Heaven and Hell, and seeing “beneath us at an immense distance was the sun, black but shining; round it were fiery tracks on which revolv’d vast spiders, crawling after their prey; which flew or rather swum in the infinite deep, in the most terrific shapes of animals sprung from corruption, & the air was full of them, & seem’d composed of them.”

Romanticism is John Martin’s Sadak in Search of the Waters of Oblivion, and Berlioz discovering his beloved is turned to a harpie at the Witches’ Sabbath at the end of the Symphonie Fantastique, and Ahab blaspheming on the quarter deck in Moby Dick.

So, Werner Herzog, you gave me a good laugh.