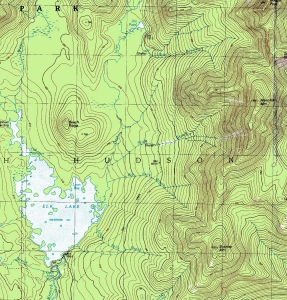 An ideology is like a road map. It contains a schematized version of the world. But, it is always a simplified and distorted version. It may show the roads, or be covered with circles of topographic tree rings, or be great blotches of geological information. But it by necessity ignores a great deal of information to clarify some single small aspect.

It is hardly surprising, then, that a conservative sees a different world from a liberal; one is looking at highways and the other is looking at landforms. But this is not simply binary: The libertarian has a different map from a neocon, the religious right has yet another map, and the fiscal conservative yet another — and all call themselves, in one sense or another, conservative. The same variety can be found at every point in the political spectrum. Just consider how many spatting socialist parties join in war against each other.

And all of this is only the plethora of maps held by political enthusiasts. Politics, after all, is only one tiny corner of human consideration. Look at the range of literary theory, from Formalism through Structuralism to Post-structuralism, from deconstruction to neo-Marxian criticism. Each of them has its own roadmap and each ignores any tiny detail that might confuse the clarity of their ideology.

Or religion. No, let’s narrow it to Christianity. Or further, let’s narrow it to Protestant Christianity with its Methodists, Lutherans, Congregationalists, Presbyterians, Baptists — oh, heck, lets just look at Baptists. There are Free Will Baptists, Primitive Baptists, African-American Baptists, Landmarkism, Missionary Baptists, Fundamental Baptists, Progressive Baptists, Reformed Baptists, Sovereign Grace Baptists, Southern Baptists and Two-Seed-in-the-Spirit Predestination Baptists. And that only scratches the surface. Each is separated from the others by a map that emphasizes some single detail that serves as sufficient cause for a schism from some parent group, whose roadmap leads directly to Hell.

(This is the sticking point for Pascal’s wager: That if you don’t believe in God and he exists, you go to eternal damnation; if you do believe and there turns out not to be a God, then you are no worse off than if you didn’t believe. Therefore, said Pascal, the smart money is on believing: You have a one-in-four chance of salvation; the atheist belief has a certainty of annihilation. The fly in the ointment is this proliferation of sects. Which God do you place your wager upon? Choose wrong and, whoosh, you slide down the chute to perdition. That one-in-four bet now looks more like the state lottery.)

The world map most of us remember from the walls of our schoolrooms was the Mercator map, which attempted to show the oceans most accurately to aid navigation, while distorting the landmasses to accommodate that. We have become so used to the Mercator look, that any other map looks somehow “wrong.” If you take the Peters map, for instance, it looks highly ideological, as if it’s trying to make a propaganda point. Of course, it is, but so was the Mercator map. Where is Europe? Why shouldn’t China be at the center?

Try to take the globe and flatten it into a map and you are forced to distort. No way around it. The problem is that a map is not an accurate depiction of reality, but a schema, a simplified, diagrammatic visual representation.

Comedian Steven Wright once said, “I have a map of the United States … Actual size. It says, ‘Scale: 1 mile equals 1 mile.’ I spent last summer folding it. I hardly ever unroll it. People ask me where I live, and I say, ‘E6.’ ” 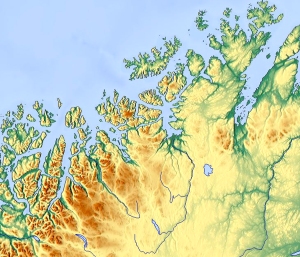 Consider the fractal nature of the Norwegian coast (as designed by Slartibartfast). How many miles of coastline is there in Norway? Depends entirely on how accurate you want to be. If you look at it as the crow flies, it is something like a thousand miles. But there are all those fjords and inlets. Add them to the calculation and you wind up with an accepted length of 25,000 miles — enough to circle the globe. But that doesn’t count the islands. Add those and you are up to 80,000 miles. But let’s lower the fractal scale: The usual numbers are calculated in a rather crude way. The fjords might be considered, but how about the river mouths leading to the fjords, the creeks feeding the rivers, the constant wavering of shoreline zigging and zagging. Look at it not at a mere human scale, but on the microscopic, and you realize that you can re-add-up the length of the coast of Norway to something like infinity. Reality is that infinity. Existence is overwhelming. So forgive me if I snort at your conservative roadmap, or your Marxist theory of history, or your prescriptive grammar.

It is no different from any other version of reality, any ideology, religion, artistic convention or psychological theory. Reality is maimed.

And so, ideology is always mistaken. Always. It cannot be otherwise.

Every ideology is based on a synoptic description of the world, a limited model of the way things are: a map. That map, whether it is the right-wing Mercator of nationalism, privatized economy, traditional marriage and organized religion, or the left-wing Peters of fair distribution of wealth, cultural tolerance, the evils of a class system and mistrust of big business – that model is always too simplistic, too limited, too rationalized, too coherent, to encompass the vast, unwieldy, incoherent, and imponderable experience of being alive.

Our lives, among the swirling trillions of stars, the millions of species of plant and animal, in the midst of an atmosphere ruled by chaos theory, with the billions of synapses in each of the billions of brains that populate this ball of dirt, are too complex to fit into any ideology. Is the standard-bearer of Progressivism a millionaire? Is the Christian conservative a secret frottagist or Republican pedophile? Is the classical scholar a fan of hip-hop?  Does the Andean priest speak Church Latin? We should never be surprised.