It’s easy to think of Gothic cathedrals as a single thing. The way we think of high-rise office buildings all being glass and steel towers, totally interchangeable. But each Gothic church is distinct. As you visit them, you find something completely outside the generic “plan.”

The cathedral at Laon, for instance, is sometimes called a “barn cathedral.” That seems insulting, at first, but when you visit, you realize what is meant.

The “standard” Gothic church is built on a floorplan based on the Christian cross, with the long part of the cross stretching to the west, with a main entrance in the western facade. There is a cross-piece, called the transept, which cuts across the primary axis at 90 degrees, and at the eastern end, a shorter part of the cross: the choir, ending in a rounded apse. The choir and apse together are known as the chevet.

You also expect a great round rose window cut into the western wall, and perhaps two other roses in the north and south ends of the transept. 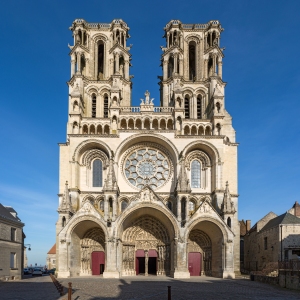 The central corridor of the axis is called a nave, and it is usually paralleled to either side by an aisle. Above the aisles is a second story gallery known as the triforium, and above that a row of windows called the clerestory.

The nave is tall and narrow and topped with a series of ribbed vaults, holding up the ceiling.

Outside, the west facade is usually bounded by two towers, one to the north and one to the south.

The problem is, that no single example follows all these descriptions. Each church is unique. This one has tall spires instead of blunt towers; that one has apsidiol (rounded) transepts instead of flat-ended transepts; another has two aisles on each side of the nave; yet another (like Rouen) has a tower above the crossing of the transept — that point where the nave and choir transect the transept. (Is all that confusing enough, and enough specialized vocabulary to bog things down?)

Laon is a town built on a mesa in northern France. In some ways it is reminiscent of the Hopi mesas in Arizona. At the top of the mesa the cathedral rises above the surrounding plain. Like the Hopi mesas, the oldest part of the city is on the summit, and the more modern parts below in the shadow of the mesa. You can see the cathedral from many miles away as you approach.

If you drive to the top of the mesa, the streets are narrow and convoluted; parking is at a premium, and while most other cathedrals have a broad parvis, or plaza, in front of them, the parvis at Laon is a shrunken little wide spot in the narrow road not much bigger than a Burger King parking lot. It makes getting a suitable photo of the cathedral facade nearly impossible; you simply cannot get back far enough to get it all in, unless you use an extremely wide-angle lens, in which case, the perspective goes all askew. The central tower allows for a great open lantern at the heart of the cathedral, which thrusts upward beyond the vaulting, adding an extra level of windows, making the highest part of the church the brightest. 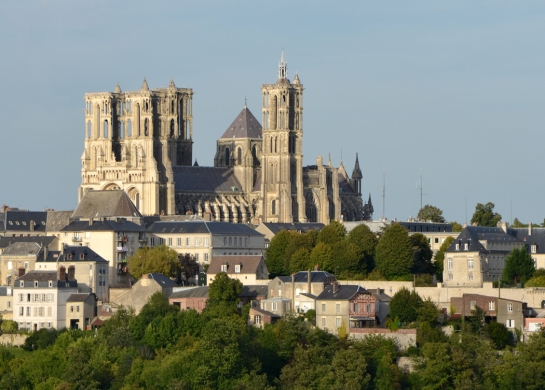 The first idiosyncrasy you notice (after the parvis) is that the church has five towers instead of two. There are the usual towers at the north and south edges of the west facade, but there is a single tower at the face of each of the transepts and a fifth tower over the crossing, in the center of the church. That’s a lot of towers for a church — you hardly know which to pay the most attention to. The western towers are the traditional high points, but at Laon, the transept towers are much taller. (The central tower is a dwarf, truncated and hardly to account).

Then, there is the interior elevation. Instead of a nave arcade on the ground floor, a triforium and clerestory above that, there is a fourth layer in the cake: a blind arcade above the triforium. The triforium itself is distinctive, because it has windows behind its arches, helping to light up the interior of the building.

But what makes Laon a barn, if you want to use that word for something so spiritually uplifting, is that at the far end of the nave, the eastern end of the cathedral, you do not have the usual curved, graceful apse, but rather a squared off butt end, graced with an extra rose window.

The nave is wide and the effect is to give the sensation of a large warehouse or barn, rather than the more usual gracefulness of curves and lancet stained glass you find elsewhere.

With its barn-end long-stretch, Laon manages four rose windows instead of the usual three. The one in the north, like the western rose at Chartres, is simple and heavy with stone.

The western rose, while glorious as far you can see it, is mostly blocked by the church organ. 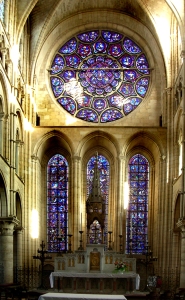 Leaving the east rose as the prize. It is mostly replacement glass, but with some original glass in it. With three lancets, it makes a stunning bit of stained glass as you look past the altar into the choir.

Laon also had towers on the sides of each of the transepts — towers that were actually taller than the west facade towers, giving the whole a rather different proportion than any cathedral we had seen before.

And there was a giant rhinoceros on the facade, with a man under him holding a noose around its neck. Actually, it was a flying rhinoceros, because it had wings.

But also on the front of the cathedral was a giant hippopotamus, also with wings, and with a man under it poking it with a sword.

We thought this singularly odd. When we asked, we got a reply in French pidgin English that implied — although we aren’t confident we understood properly — that one of each was “sacrificed” at the opening of the cathedral.

This seemed odd enough, but when we got to Rheims, it had a rhino, too, between the north and central portals, and a bull’s head between the central and south portals. 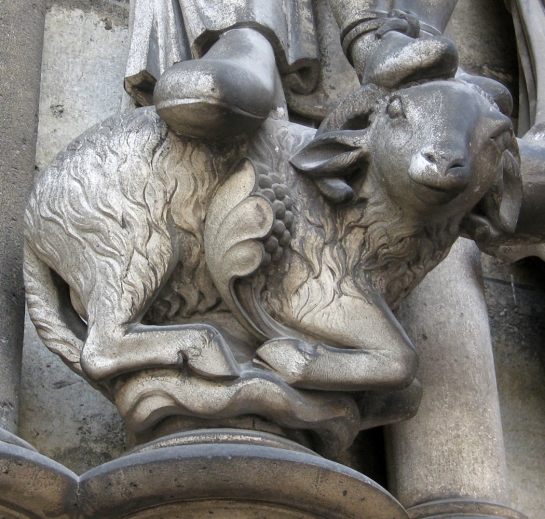 There are lots of animals on the cathedrals. They are one of the surest joys of cathedral going. But Laon was special. It’s two western towers were ringed, two-thirds of the way up, with pairs of giant animals at the corners — eight animals per tower, in pairs of four. Two unicorns, two horses, two bulls (or cows), two goats, all giant enough to be the villains in 1950s Hollywood sci-fi monster films. 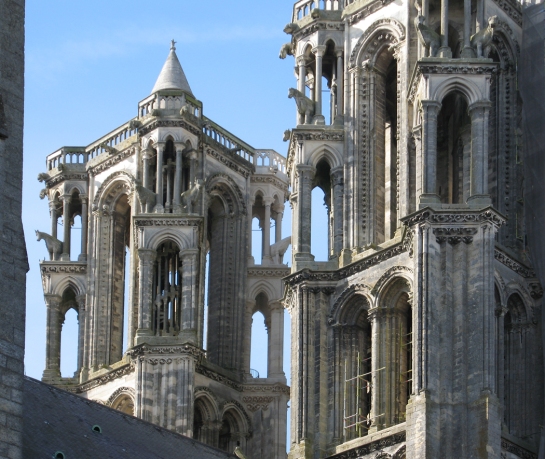 Yet, what most people probably remember most from Laon are the oxen. Strange as it may seem, it looks as if the cathedral is dedicated to cattle. The two west towers are filled with animal sculpture, it is a stone menagerie, a carved zoo.

“When we looked up high at Laon at the stone animals and identified them together, I had the feeling, yes, this is the world I live in,” wrote Carole in her diary. “There is a goat, there is a horse, here’s an angel, devil, saint, monster, son of god. But here is a donkey, and a bear. This is about my world.

“And these little animals were elevated to the towers of the cathedral where they looked out on all the countryside. I know ancient children really loved those animals. And probably tried to make them out of clay.”