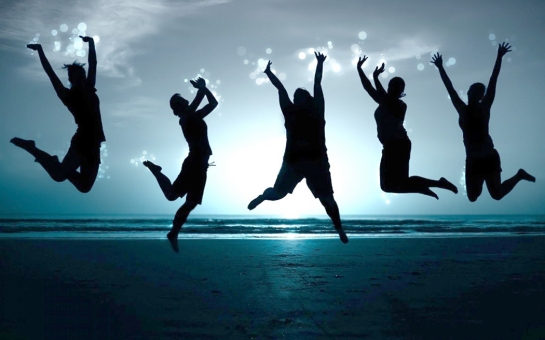 In Shelley’s Ode to a Nightingale, he reminds us that “our sweetest songs are those that tell of saddest thought.” And in classical music, our greatest symphonies, quartets, sonatas and trios all give us a complex emotional universe — and the greater the music, the more likely it will contain heavy, dark, profound and difficult emotions. When it’s doing its job, a symphony is not background music.

You can go through it all: Even music that is ostensibly about joy tends to be about a kind of manic fervor or about the transcendence of the pains of mortal life — not simple happiness. Beethoven’s “Ode to Joy,” for instance, is so over the top, that sometimes you just want to say, “Boy, get a grip.”

Happiness would seem to be the province of the popular song — Feelin’ Groovy, or Irving Berlin’s Blue Skies (you should hear Duke Ellington’s take on that one in Blues No End). What you feel coming out of a performance of Mahler’s Third Symphony is something different — rung out, depleted yet renewed, taken through the paces of all of life. Happiness is irrelevant. Beethoven’s Fifth, Brahms’ First, Tchaikovsky’s Pathetique, Mozart’s Jupiter — They are all large, complex and attempts at metaphor for the joys and pains of being alive.

“Our sincerest laughter/ With some pain is fraught.”

But mere happiness? You can look long and wide to find anything that simple in classical music. And yet …

And yet, as I was driving to the store the other day, with Brahms’ First Serenade in the CD player, I felt a swelling of pure happiness as I listened. The music flew by with a genuine joie de vivre, a thought you rarely think when Brahms comes along. Johannes is all gravitas, Weltschmerz, longing — it used to be joked of Brahms that when he is happy, he sings, “The grave is my joy.”

But here he is, without a thought in his head, spinning out tunes of unreflexive pleasure. The horns and clarinets seem to dance their way through the six movements, with no angst over whether the G-major of this theme leads to the e-minor of that one, or whether the rising fourth here is balanced by a descending fifth in the finale. None of it, just tunes. Bouncy, happy tunes. Who knew Brahms had it in him.

And I began to consider other pieces in the standard repertoire that might share something of this simplicity, this sheer pleasure in the notes —  that feeling of walking along on a sunny day with some spare change in your pocket, knowing you will see your sweetie in the evening and whistling a happy chune.

Could I list at least 10 such compositions: It was a challenge I set myself.

First up, of course, come Schubert’s “Trout” quintet. No one has ever written so many hummable tunes in a single piece of music, from beginning to end, pure forward-moving bouncy, danceable melody. It is the counterweight to that other quintet, the string quintet that seems to bind up in its aching arms all the sorrow and pain of the world. In the “Trout,” there is none of that, only hope and pleasure and everything that a major key can shout.

Did Beethoven ever write anything so worry-free? Beethoven had bigger fish to fry. He was busy creating a new century. And yet …

Buried in that treasure hoard of piano sonatas — the so-called “New Testament” of piano literature — there is one tiny sonata in G-major, op. 78 — alla Tedesca — that has nothing but bounce and verve. It is short, clever, witty and fun. Not your usual Beethoven adjectives.

Haydn, of course, is the fountain here. You can pick almost any of his works and find acres of wit, bounce, pleasure and fun. There are his more profound moments, but pick any symphony in the 60s or 70s and you can run from start to finish with a smile in your heart. When I want to feel good, I snap in a Haydn symphony to listen to.

For instance, the Symphony No. 73 in D, “La Chasse,” which ends with a fox hunt, a rousing ride through the countryside with horn and hounds.

Or the Symphony No. 60 in C, “il Distratto,” which has a joke larded into it every 11 bars — you never have to wait long for another one, like a New York City bus. There’s the place where he stops and has the orchestra retune, right in the middle of the finale; there’s the second theme in the first movement, that just stops in its tracks harmonically and seems to fall asleep. But it isn’t the jokes, per se, that I am touting here, but the sheer joy of the music, unalloyed with anything like “the saddest thought.”

If you want to find the same music, but in a 19th century idiom, you have it in Georges Bizet’s Symphony in C, which he wrote when he was a mere stripling of 17. It begins with joie and ends with enthusiasm and in between it is stuffed with buoyancy and energy. You cannot listen to it without it putting a bounce in your step.

I had the pleasure of seeing the New York City Ballet perform George Balanchine’s Symphony in C at the Palais Garnier in Paris, and I couldn’t tell which thrilled me more, the choreography or the music. It is one of the high points of my esthetic life and kept me smiling for days, even weeks.

You get something of the same confident buoyancy in Nikolai Rimsky-Korsakov’s Capriccio Espagnol, written as a virtuoso piece for orchestra, and everyone gets to join in the party. No shadow hangs over the music — it is all joy.

The 20th century is a sorry one, filled from end to end with war, murder, oppression and genocide. But there are points of light in the music. Prokofiev may have the three great “War Sonatas,” with all the weight of the world on them, but he started out with his Classical Symphony, which is a nod back to the music of Haydn, but with all the hot sauce of Modern dissonance tossed in for spice. The music bounces its way from the get-go. You can’t have a heavy thought while listening to it.

And Paul Hindemith — who used to count as one of the big three of Modern music with Stravinsky and Schoenberg (how the mighty have fallen) — joins my list with his Symphonic Metamorphoses on Themes of Carl Maria von Weber. He is helped out, of course, with the jaunty tunes that he culled from Weber, but he costumes those tunes with the happiest, bounciest orchestrations and developments.

And finally, to round out my self-assigned Ten, there is the verve and sass of Darius Milhaud’s Le boeuf sur le toit, which is 15 minutes of toe-tapping polytonality based on dance tunes from Brazil and named after a cabaret in Paris where the avant-garde met and drank and did their best to show off to each other. Listen to the music once and you will not be able to get it out of your head for days — or out of you hips, knees and feet. Not a care in the world.

The cares of the day will come back, as they always do, and even such happiness as embedded in this music can wear out its welcome, joyful, but a bit thin compared to the Big-Boy cousins in the concert hall, but for a moment, like that happiness you feel skipping down the street on a good day, it seems like all the world needs.

Here’s my list. Please add to it or make your own:

–Symphony No. 60 in C “il Distratto” by Joseph Haydn

–Symphony No. 1 in C major by Georges Bizet

–Symphony No. 1 in D, op. 25 “Classical Symphony” by Serge Prokofiev

Opera has an ABC. They are Aida, Boheme and Carmen. No regional opera company ever went broke programming these blockbusters. They are all extremely popular and well-known.

We all know that the gypsy Carmen seduces the not-too-bright army corporal, Don Jose, and then dumps him for the flashy matador Escamillo. Death ensues while crowds cheer in the bull ring.

We hum along with the tunes: the habanera, the toreador song, the boys mocking the soldiers and their tune. The suite from the score was once one of the most programmed pieces of light classical music, rivaling Tchaikovsky’s Nutcracker Suite and Grieg’s Peer Gynt. One of Sir Thomas Beecham’s “lollipops.”

The opera comes from a novella written in 1845 by the French Romantic author Prosper Merimee. And like a movie made from a book, a few things are changed for the sake of drama.

Here are some things you probably don’t know about Georges Bizet’s Carmen:

1. Bizet’s librettists, Henri Meilhac and Ludovic Halevy, gave their bullfighter a major promotion. In Merimee’s book, he is not the noble matador, but a mere picador, a stripling named Lucas.

The mezzo hired to sing the part of Carmen didn’t like the aria Bizet had first written. He tried 10 times to come up with something, eventually writing the single most famous tune from the opera. Or did he? Turns out, he stole the melody from an earlier tune, called El Arreglito, by Sebastian Yradier who had only recently died. Yes, Bizet plagiarized the melody. When the score to Carmen was published, Bizet had to add a note acknowledging his source.

4. More than 60 films have been made of the story. Oddly, the first 17 were silent films. Silent opera is rather like dancing on the radio. That list of silent films includes one by Cecil B. DeMille, from 1915, which was based on the original novel because the producers didn’t want to pay the rights to the opera and chose the public-domain novel instead. They then changed the book’s plot to match the opera’s. Among the silent Carmens were Theda Bara (1915, directed by Raoul Walsh), Pola Negri (1918, directed by Ernst Lubitsch) and Delores Del Rio (1927, also directed by Walsh).

5. Recent Carmens tend to stretch the story or the music. Like Beyonce in Carmen: A Hip Hopera (2001), or the 1983 Carlos Saura masterpiece, which turns it into a flamenco dance. Also on the list: Carmen on Ice (1990); Karmen Gei (2001), which sets the story in Senegal; Carmen Jones (1954), with Dorothy Dandridge and Harry Belafonte; and most recently the powerful South African township version, U-Carmen eKhayalitsha. Check it out on DVD.