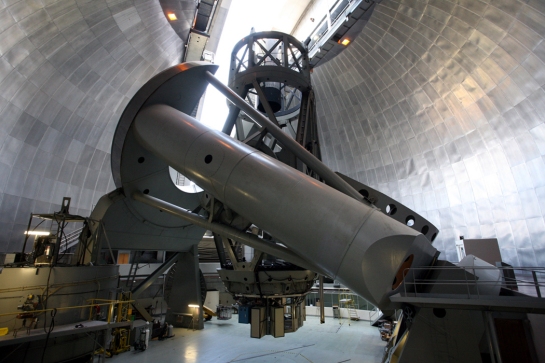 When I was a boy, like many boys, I developed an interest in astronomy.

I spent many frozen February nights outside my New Jersey home enjoying “good seeing,” when the cold air kept the stars from twinkling too aqueously. It was an interest I shared with my best high school friend — known as “Gizmo” — and we often used his 6-inch telescope to watch the rings of Saturn or the wrinkled “terminator” of the moon — the deckled line between sunlight and shadow roughened by lunar craters and mountains.

And when there was a total eclipse of the sun in 1964, Gizmo’s father drove us both up to Maine to get the best view. The birds stopped singing in the sudden darkness and Giz and I stopped talking as we were caught up by the final glimmer of Bailey’s Beads — that last-second “diamond ring” before totality — which gave way to a black hole in the sky surrounded by a fluorescent curtain of corona.

As we grew older, Gizmo’s interest proved more genuine. He was inclined toward science and mathematics and went off to Rensselaer Polytechnic Institute in upstate New York. My interest in the heavens turned out to be the interest of a humanities student — a little too much gee-whiz and not enough trigonometry.

Nevertheless, as a boy, I read everything I could on the subject. One name kept popping up: that of Palomar Observatory with its 200-inch Hale Telescope. All the best photographs, it seemed, were taken through that monster instrument. 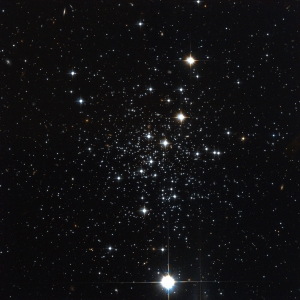 It was, I knew, the largest telescope in the world — a title it held until only recently — and sat on a mountaintop somewhere in the West.

And that is the rub. Being from New Jersey, everything beyond the Delaware River was a little fuzzy to me. I guess I knew Palomar was in California, but where in that state, I never really had a clue. The telescope existed rather in some ideal region, not subject to county zoning restrictions or state tax laws. It was just “Palomar.”

So, when I found ourselves in Southern California, driving up Interstate 15 from San Diego, when I came upon the exit for Cal. 76 north of Escondido and a roadsign mentioned Palomar.

I took the detour.

Palomar Mountain is a real place, with real stones and real trees, and, I’m sure, real county ordinances.

It is not easy to get to. It is way off the Interstate, down winding narrow roads through small towns and valley farms. The road gets narrower and more twisted as you turn off Cal. 76 and begin to climb Palomar Mountain on Cal. Route S6. There are some 24 switchbacks on the way up, with long views of an empty part of the state each time the road pokes into the open. 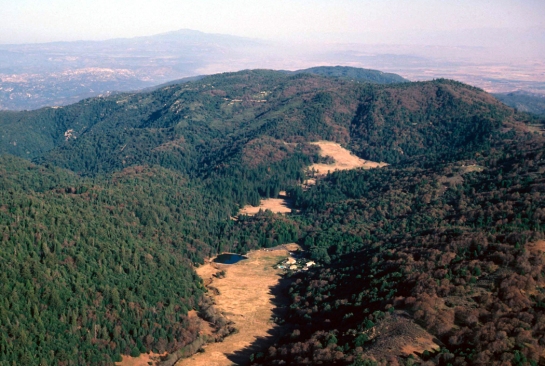 The mountain is 5,600 feet high, with a broad flat saddle top. You turn off Cal. S6 onto Canfield Road and it loops the final miles to the parking lot at the observatory.

The woods that have bounded the road gives way to an open space filled with more ferns than you normally find outside of coastal Maine. They sit in the fields along the final few hundred yards to the glaring white dome at the edge of a rise.

The building is immense. The rotating dome is 135 feet in diameter and tall enough to fit a 13-story building inside and still raise a flagpole on top of the building. 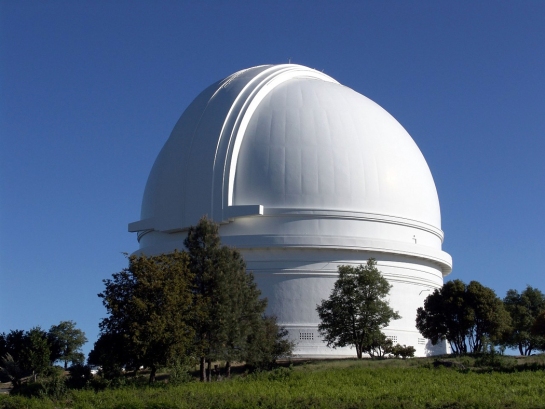 Although the observatory opened in 1948, its design is from an earlier decade. Plans for a giant telescope were begun in the 1920s and work on casting the telescope’s glass mirror began in 1934. Work had to be halted during World War II. So, when it opened after the war, the building still bore the stylistic marks of the earlier Art Deco style. It is a plain building, but the ornament and proportions are unmistakable.

Yet, it is the machine inside the building we have come to see.

Little effort has been made to accommodate the visitor: There is a parking lot and a small, outdated museum and gift shop at the bottom of the hill. Inside the dome, there is only a small, poorly marked visitors’ gallery, glassed-in to keep the hoi polloi from gumming up the work of busy scientists.

Still, in the daylight murk of the closed up dome, you can see a giant, mechanical eye, the size of a coastal gunnery emplacement.

And it does bear some resemblance to a mammoth cannon, with a barrel that can be pointed in any direction.

Only, instead of pumping ordnance into enemy lines, it swallows down the buckshot of stars, giving astronomers a peek at distant points of light so dim and distant, they speak of the birth of the universe.

The very first photographs taken through the telescope doubled the size of the known universe. Later work doubled it again, when Palomar astronomers discovered quasars.

Size isn’t just for the heavens, though. The rotating part of the dome weighs in at 1,000 tons. The moving parts of the telescope weighs 530 tons. The mirror, nearly 17 feet across, weighs 14.5 tons. 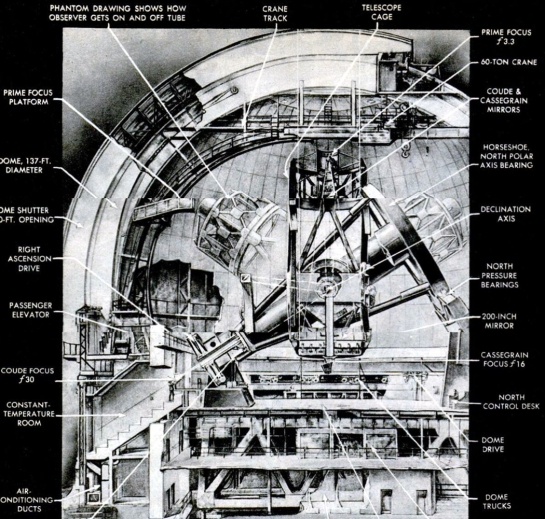 Yet, despite its massiveness, it only takes a tiny motor of one-twelfth horsepower to slew it around its bearings. In fact, you could, if anyone would let you, move that 530 tons with a single finger judiciously placed, it is balanced so well. It helps that it is mounted on a pad of moving oil, a thousandth of an inch thick, which keeps the weight riding frictionlessly.

Astronomy has moved ahead, working with computer images now instead of photographic plates. Yet, in the small museum at the site, you can see large transparencies of some of the observatory’s more famous images.

Perhaps because I grew up and became a writer rather than a scientist, I miss the awe and beauty of those million-dotted pictures, glowing white hot, like Moses’ bush, and giving a visual, esthetic image of the majesty and immensity of the universe.

The great full-color and false-color images from the Hubble telescope have replaced the old Palomar pictures in the minds of most younger humanities students, giving a newer, more rainbowed sense of the awe of the universe. But for me, it is a reminder of who I was and how I got to where I am.

Sometimes, it is why we travel, rather than where, that is the story.