Winter means rain in Northern California, and I visited when winter meant more rain than usual. Of course, it is the rain that makes the area so green.

But as I drove from Sacramento to the coast, it poured constantly. My window fogs, and I could barely see for 140 miles till I got to Willits, on U.S. 101, the ”Redwood Highway,” which I planned to take to Eureka, an additional 130 miles up the coast.

Unfortunately, a flashing sign by the side of the road in Willits tells me, ”Road Closed 125 miles . . . no detour,” which means that I’m cut off from my destination, and the only way around the problem is to drive back to the interior of the state — a backtrack of nearly 300 miles.

So I make a calculated gamble and push on north despite the sign, hoping that whatever the problem is, it might be corrected in the 2-1/2 hours it will take me to reach it.

If my gamble fails, I have an even longer return trip, just to get back to square one. At least it would be one of the most beautiful drives in the world — 101 passes both redwood country and the Northern California coast.

Even on a day of torrential downpour, there is still much to see. Near Benbow, the road snakes leisurely through the Richardson Grove of redwoods, where even when it rains, the windshield stays dry, with the evergreen umbrella several hundred feet overhead.

The farther north I get, however, the emptier the road becomes. I can drive for miles through the green hillsides without passing another car in either direction. I must admit, it does not look promising.

As I drive past the turnoff for the Avenue of the Giants in Phillipsville, the Eel River is a swollen chocolate torrent. Each time the road crosses the river, it looks angrier.

By the time I hit Fortuna on the Sandy Prairie just south of Eureka, the rain has abated, but the road is still a sloppy mess.

And it all comes to a halt at the Loleta offramp. Another flashing sign warns, ”Road Closed,” and a line of cars and trucks a mile long is stock-still.

A friendly CalTrans worker has parked his dump truck in the middle of the road and is directing the motionless line up the offramp. I ask him what’s going on and he explains that Salmon Creek has flooded the highway, pushed back on the muddy tidal flats by the incoming tide.

”Two to three feet of water on the pavement,” he says. ”Been like that since 5 p.m. yesterday.”

The result is that the entire northwestern corner of the state is incommunicado. There is no way between the north and the south. 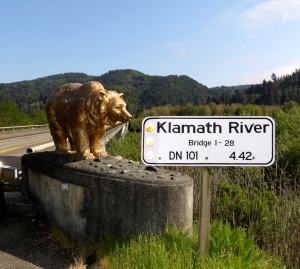 It may seem odd that a state as big as California, and one that relies as much on the tourist dollar, would allow the possibility that only a single line of asphalt might run through the area. It is true that the mountains are difficult to engineer roads through, but the fact is that there is a 90-mile stretch of mountain with no paved roads running east-west, and only the single strand of 101 going north-south.

In fact, this lack of roads has always been a sore point in Northern California. The residents have felt neglected by their state government, so much so that in 1941, the northern counties of California and the southern counties of Oregon, who felt likewise forgotten, attempted to secede from their states and form a new state called Jefferson.

Roadblocks were put up on the few highways there were, Yreka was chosen state capital and Judge John C. Childs was inaugurated as governor.

The whole thing was only half serious and half publicity stunt, and it all came to a crashing halt with Pearl Harbor. But that wasn’t the first time the region had talked secession. Earlier attempts to form the states of Shasta, and later, Klamath, came to naught in the 19th century.

There is still a feeling of independence in the area.

”For us, California doesn’t start till you get to Willits,” the CalTrans worker told me as we sat in gridlock on the road.

Then came the break: With the change of tides, the water was receding and, although the northbound lane of 101 was still underwater, the slightly higher southbound lane was passable, in convoy with a highway-patrol car in the lead. 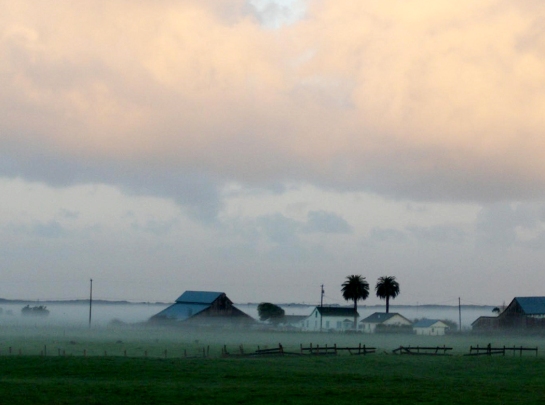 First the southbound traffic came through and passed us. A few drivers gave the CalTrans worker a big thumbs up and a smile.

”On this side, when they’re freed up, they give us the thumb, when they’re stuck going nowhere, it’s a different finger. Then we’re nobody’s friend.”

The fact is that the region has been staggered by near-record rainfall. In the 24-hour period before I drove up the highway in December, just under 5 inches of rain fell, just hundredths of an inch shy of the record. And 2 more inches had fallen this morning. Schools were closed, roads were underwater everywhere. Nearby Ferndale was partly evacuated. Power lines were out and communities were stockpiling sandbags.

Whole farms were lakes. I passed a herd of very worried cattle, which were mooing up a storm. The calves sounded frightened, up to their hocks in water.

So what could make me venture 140 miles up a road I knew to be closed? Why did I make the gamble?

Because of the Samoa Cookhouse. 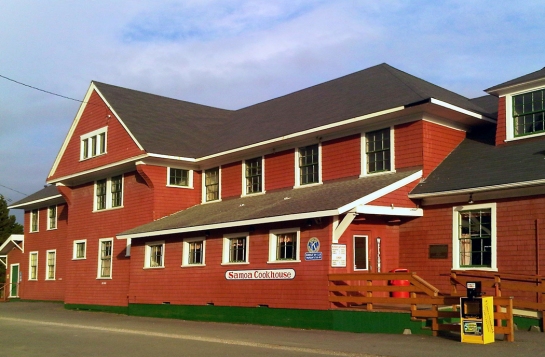 Eureka is a logging town, and the last remaining logging-company cookhouse remains in business and open to the public on the spit of sand across Humboldt Bay from Eureka.

In the building originally constructed for workers of the Hammond Lumber Co. in 1906, and now owned by Louisiana Pacific, a concessionaire operates the cookhouse as a restaurant using the original kitchen and providing authentic menus. 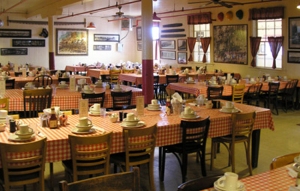 In the four huge dining rooms, up to 300 people sit 10 at a table to eat family-style meals of multiple entrees.

For $10.95, I had soup and salad, followed by roast beef and fried pork-chop steaks, with baked potato, vegetables and homemade bread cut into inch-thick slices. Dessert was apple pie.

The menu varies from day to day. You don’t have a choice, you eat what they’re cooking, but you can’t complain.

”Second helpings can be had on anything in the place,” the waitress explains.

Few people could feel the need.

Perhaps the most popular meal is breakfast, which starts at 6 a.m., and consists of flapjacks, eggs, sausage, juice, bread and jam and coffee. The cookhouse is open seven days a week for all three meals and is worth braving the possibility of a 300-mile detour.