The Pacific coast has its share of tourist traps. You can drive through the middle of redwood trees, see Paul Bunyan and Babe the Blue Ox at the Mystery Trees, or you can shop in a beached ship.

Most of these venerable stops are getting on in years and it shows in the generally seedy look of weathered paint and warped lumber.

And one of the oldest attractions on the Oregon coast had always sounded just as depressing. I had passed the Sea Lion Caves, about 10 miles north of Florence, several times, but had never deigned to go in. It was my loss.

For although the caves first waylaid tourists in 1932, it is surprisingly well kept. The small shop at the top of the cliffs that serves as ticket booth and souvenir stand looks as if it were built last year.

Your ticket gets you an elevator ride 208 feet down into the cliff rock, and when you get off, you are in a subterranean cave with a gallery view of the only mainland sea-lion rookery in the world.

The star of this show is the Steller’s sea lion, the larger of the two West Coast sea lions, and you will see up to 200 of them lounging on the rock in the cave below or diving into the pounding surf that tears into the cave every few seconds.

Most people go in the summer. This is a mistake. First of all, you have to fight hoards of tourists and you are whisked down the elevator and back up in as short a time as possible to make room for the next gang.

Second, it is in the winter and spring when the sea lions come to the cave to live and breed.

I was there in December, which like most months on the Oregon coast, is the rainy season. It was 43 degrees with a steady 20 knot wind, gusting to 35 — there is a weather station on site to keep track of these things — and a constant downpour of icy rain, the kind that soaks down to the bone.

In the cave, you are protected from the wind, but it is just as cold and raw, and there is the added pleasure of the barks and yowls of 200 yammering sea lions, which is as loud as certain places at an airport, and the smell, which has been likened to sweat-soaked sneakers, but I say is closer to warm kimchi.

The cave itself is immense: The floor covers two acres under a cave-dome 125 feet above the surf. The waves crash into the west-facing opening and slosh and foam across the piles of rock on the cave floor, where the sea lions sit and howl at each other.

In December, too, it is very dark in the cave. The low sun and the cloudy skies make for perpetual twilight in the cave; it glows with the burnished light of a cathedral interior.

The murk hides the animals at first. It’s hard to see them, although by ear and nose, their presence is well proved.

When you adjust to the gloom, you are shocked to see hundreds of them. Some of the rocks you first saw turn out instead to be a mother and her cub. A young male stands on the peak of the highest rock and lets his throat cut loose straight up into the air.

The gallery where you stand is 50 feet above the throng, and you are separated from the main part of the cave by a chain-link fence.

I watched the goings on — which looked more than anything else I can think of like the floor of a political convention — and only later realized that one sea-lion cow was directly under me on the other side of the fence. I had thought she was a rock, but she rolled over, threw one flipper up into the air like a shark fin and used her hind flipper to scratch her ribs.

She got up and watched me watching her. She stared for some time and weaved her head back and forth, the way you see circus seals bob when performing. I weaved back at her. When she finally decided that the long nose of the big sea lion watching her was really only my ball cap, she lost interest and flopped down again to try to sleep. She must have been an insomniac, because she tossed and turned for some time trying to find the comfortable position.

The cold finally got to me. I lost feeling in my knuckles. I was the only one in the cave, except for the attendant, a genial elderly man with a cultivated New England manner of speaking.

”Not very busy today,” I ventured. ”Must be a madhouse in the summer, though.”

”It moves right along,” he said. ”Our busiest day last summer, we had 1,723 people. The elevator couldn’t get’em up and down fast enough.”

The main natural entrance to the cave was discovered by a fisherman in 1880. He later bought the property, although there wasn’t much he could do with it, as there were no roads in that part of Oregon.

It wasn’t until the Coast Highway, now U.S. 101, was built that anyone thought of developing the property. And when they did, they provided a downhill climb of a quarter mile followed by descent down 250 stairs into a secondary natural opening to the cave. It wasn’t until 1961 that an elevator was installed, making the drop to the gallery possible for anyone but the best athletes. 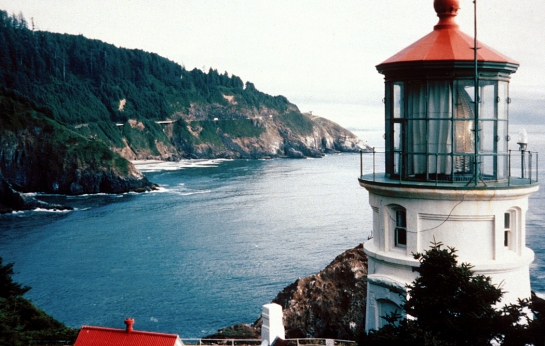 Now, that secondary opening is a balcony looking out to the north of the bluff where the cave is situated. And framed by the rocky window is a view of the Heceta Head lighthouse. No more archetypally Oregon coast scene could be possible: A rocky headland topped with dark green trees is crowned with the squat white shaft of the lighthouse, which beams out its flash every 10 seconds.

When I rode the elevator back up and got out into the wind at the top of the cliff, I looked out over the ocean and saw a dark gray squall moving on the surface of the water headed directly at me. I thought it a good idea to go the the souvenir shop and wait for it to pass.