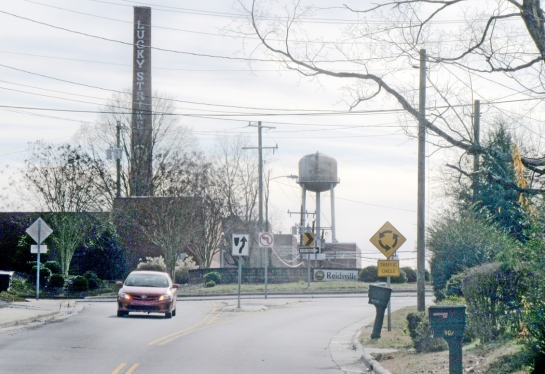 Reidsville is a small town in north-central North Carolina halfway between the city of Greensboro and the Virginia border. It was once the home of the American Tobacco Company and at the north end of downtown is a huge factory complex with a smokestack that still says “Lucky Strike” on its shaft. 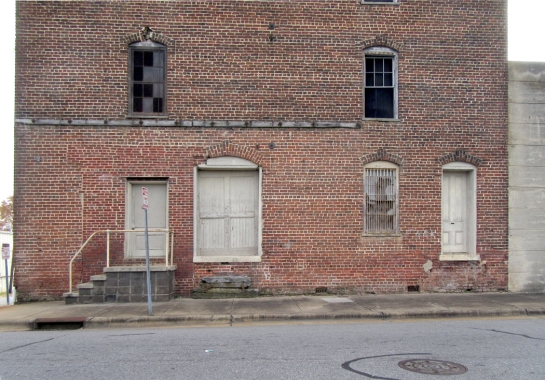 Like so many Southern towns, there is a main street where the shops are found, and a parallel street where the old factories and warehouses are located, with the railroad tracks running alongside. This pattern is repeated throughout Dixie, but is especially common in the Piedmont, which was once the industrial heart of the Southern states. 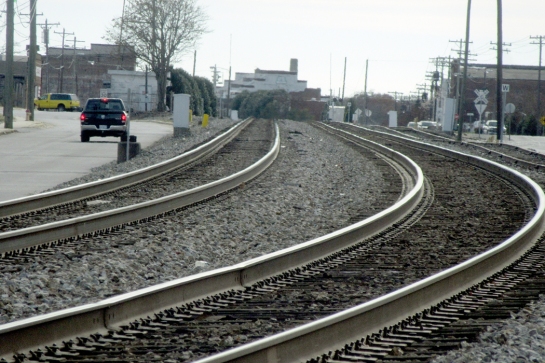 The downtown in Reidsville is not as vibrant as it used to be. There are many empty storefronts and some of those have been filled with “antique” emporia and consignment shops. I don’t want to imply it is a dying town; in fact, it seems quite happy and busy, even though its heyday ended with the closing of the tobacco plant.

There were also textile mills and other factories and their old buildings, now repurposed or abandoned, line the back street and railroad tracks. I find such relics irresistible. 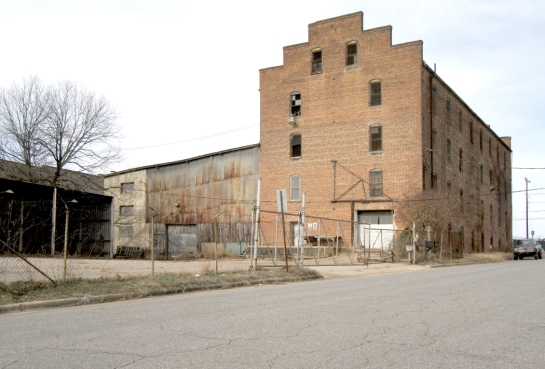 As I explained in the previous blog entry, I am compelled to make things — the compulsion is itself a relic of the old Protestant work ethic; I feel guilty if I am not producing something. So, as a retired writer, I still pump out blog entries, and as a former photographer, I am still driven to make images. These usually group in series; which I call “projects.” For years, I made serial images of gardens, always meant to be seen not singly, but as a cohesive group, rather like a book. I hope each image can stand on its own, but it is not designed solely for that purpose. 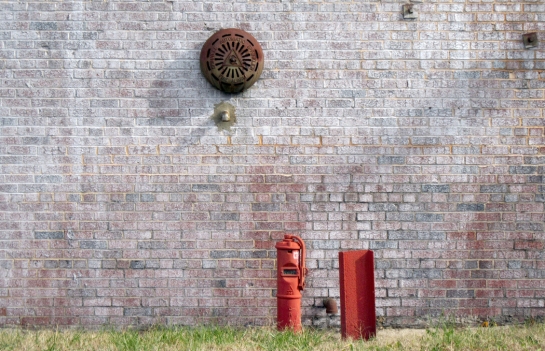 In the entry previous to this one, I presented bits of a series of fruit and vegetable images, and a recent bunch of “tree nudes” — winter trees with their branches and bark naked to the weather. 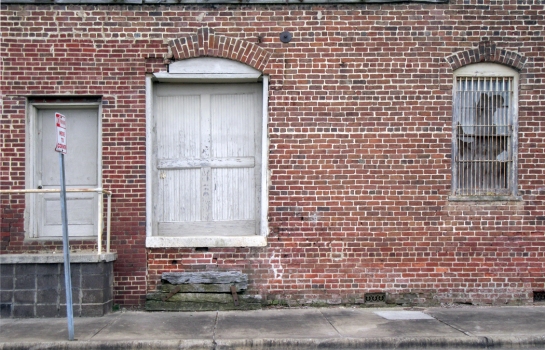 I also spent a day driving the industrial streets of Reidsville, looking for the past poking through the present. Along SE Market Street, alongside the rails, there are the shells of old warehouses and factories, textured with brick and sometimes closed off with tornado fencing.

I have been fascinated by such places since I was a boy, loving the less visited side-streets in New York, looking at old apartment buildings and second-story residences above storefronts. There is something about the edge of decay that is beautiful. A fresh new building just seems unripe; one that has been settling for decades, even a century, has gained character. 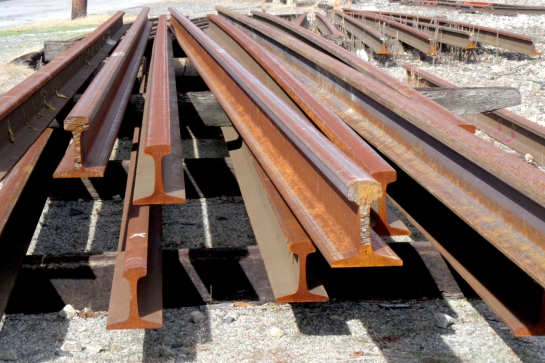 This is something like the Japanese esthetic concept of wabi-sabi, or an appreciation of the imperfection and impermanence of things, and why a Japanese potter will often crack or warp a vessel before firing it, finding the result more beautiful than bland regularity. 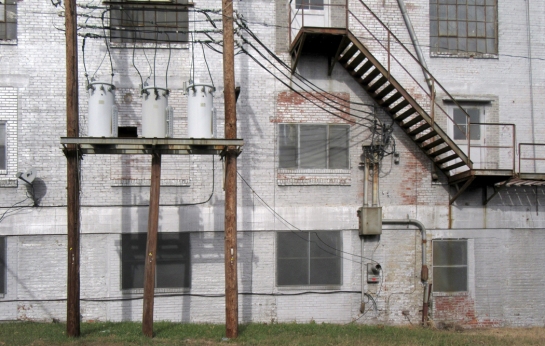 In the past, when I made photographs of old buildings, I made them in black and white, which seemed a way to emphasize form and texture, and was then the accepted presentation of “art” photography — color not making it into most museums because of its perceived impermanence (consider your old snapshots, turned magenta and faded. A museum didn’t want to pay good money for an artwork that would go south in only a few years). 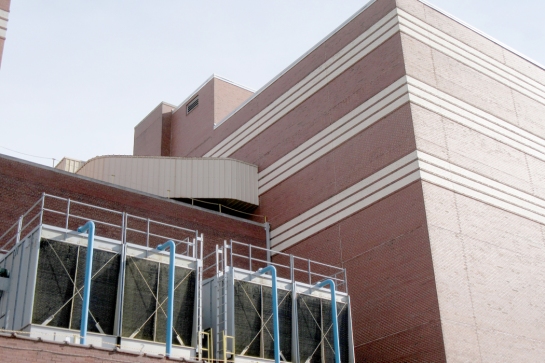 Black and white was what all the photographers I admired used (with a few exceptions). And if I looked at one of Walker Evans photographs for the Farm Security Administration in the 1930s, I found beyond the images of poverty, a way of making beauty out of decaying architecture. 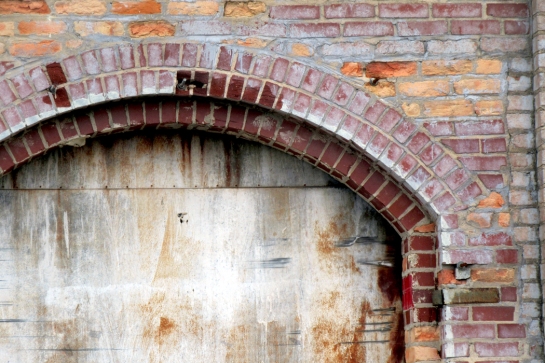 One of the few classic artworks I actually own is Evans picture of the Rock Hill Cafe in Alabama. It is beautiful and I love it. 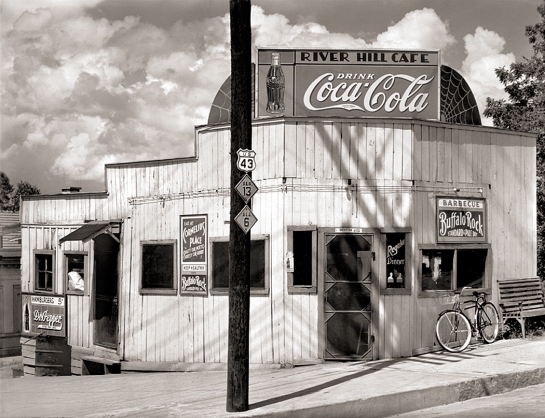 But as I get older and as technology has improved and my perceptions have changed, I find myself making color photographs more often, and often the color is the point. So, I might see an old welding shop in Reidsville and see it in monochrome. 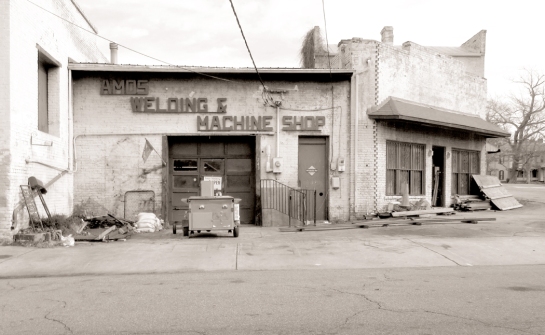 Or I could present an old rusted doorway in B&W 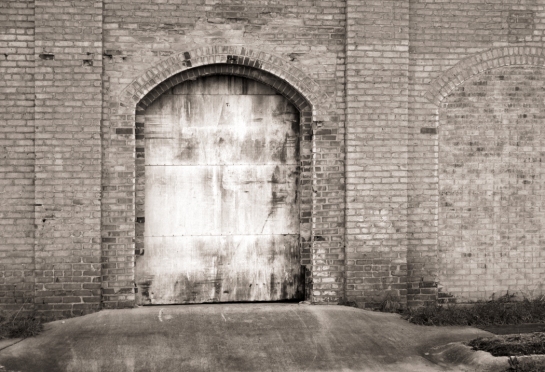 I saw, though, a range of subtle color that just delighted my eye. 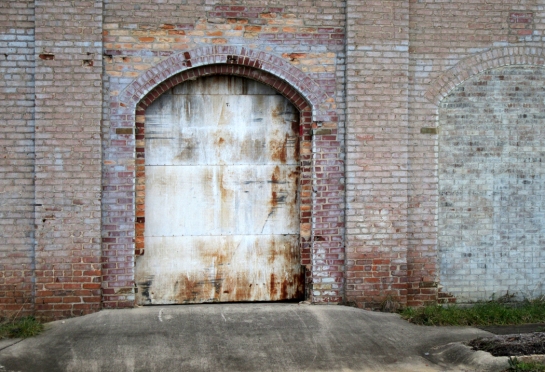 Interestingly, Evans himself took up color and in the 1960s made a series of color photographs of old buildings. His materials were not as good as we have now and the color never completely satisfied him. 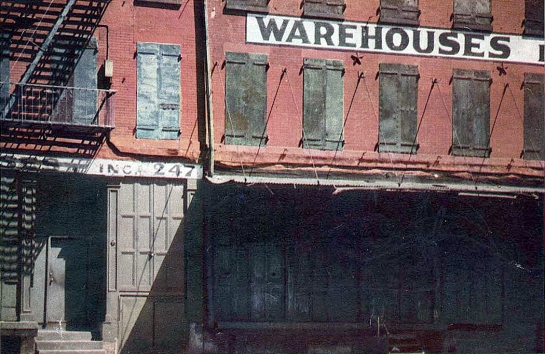 There have been some truly impressive color photographs made by such artists as William Eggleston, Eliot Porter or Ernst Haas. They forced me to reconsider the esthetics of color. 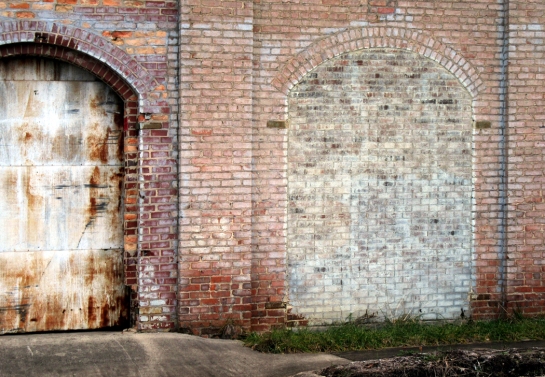 To say nothing of the melancholy and beautiful streets of Edward Hopper. 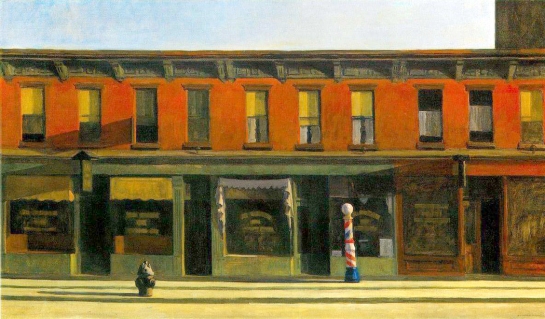 So, I drive through the streets of Reidsville on a December morning and see so many absolutely beautiful wrecks. Because it is cold, and because I am old and my hams have gone weak, I aimed my camera through the opened side-window of my car and made my series. 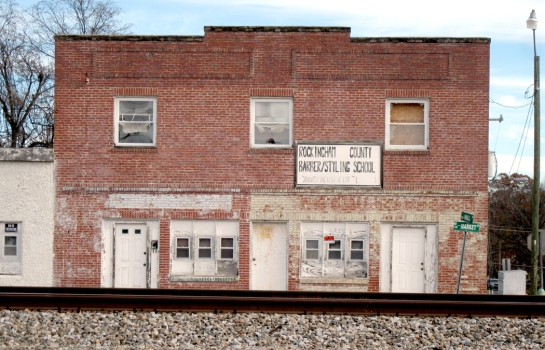 There were times I parked and got out of the car, but mostly, I made the window-height camera a part of the esthetic — or I’m just lazy. 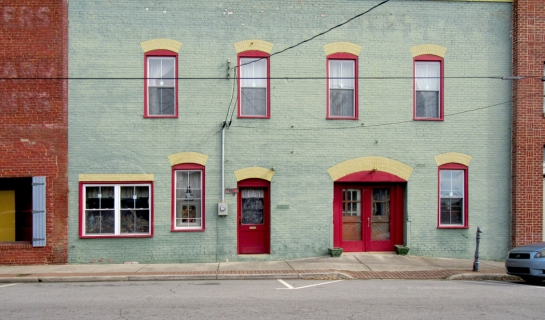 I drove down Market Street and up the other side of the tracks, then crossed back by Harrison, Gilmer, Settle and Williams streets. There was beauty everywhere. 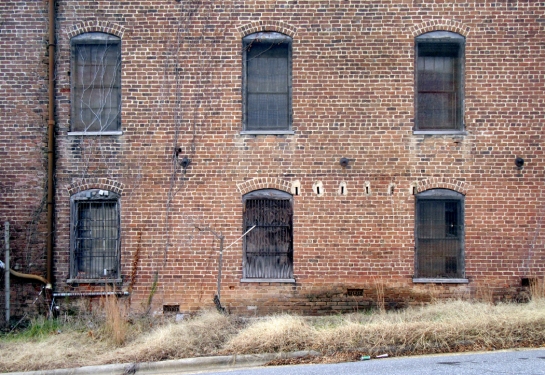 The question of whether what I have made is art no longer interests me. There was a time I wanted to be an artist, but now my emphasis in not at all on how I am seen or judged by others, but rather the direct fact of making stuff. It matters little what it is called. 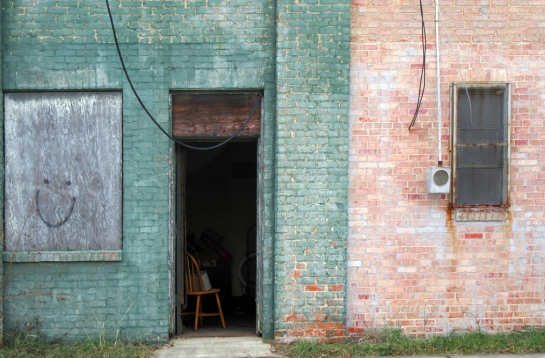 The photographs are my way of engaging with the world, reminding myself to see it and see it whole, not just the sunsets and mountainscapes, but the sagging doorways, too, and the cracks in pavement. The way the clouds gray-up and dull the shadows till they flatten completely. The roundness of an orange, the spatter of mud on my tires, the layers of paint on my back porch. 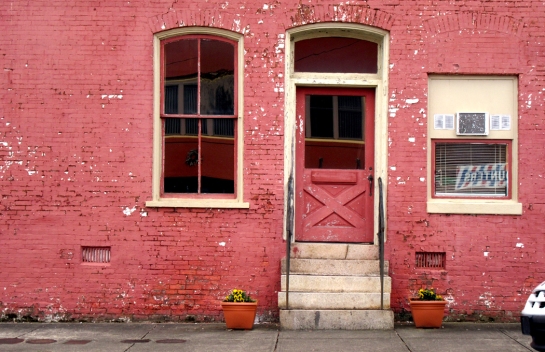 I now consider this engagement far more important than the artifacts that results, however much fun it is to share them. 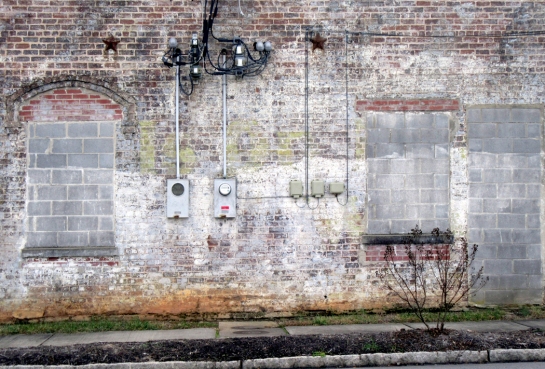 I have talked with my brother about this, who is an artist — a real one, with sales and exhibitions — and he rather laughed. “What do you think an artist is? A vocation? Something you go to trade school for, like plumbing or accountancy?” 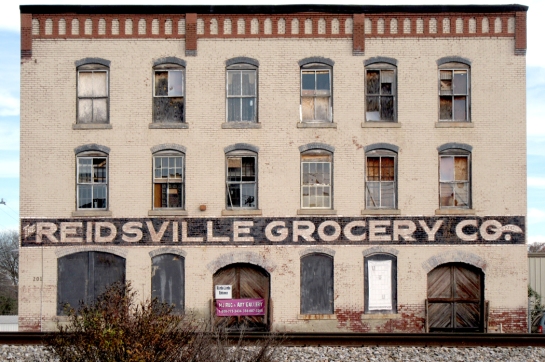 The urge, the need to make things, he said, the fact that you do it makes you an artist, whether you think of yourself that way or not. Being an artist is not so lofty a title; it is simply something one does. 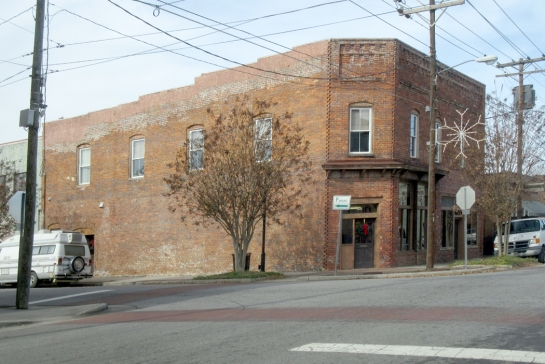 And so, I drive up and down streets looking at the world that amazes me, and I find color and shape and texture; shadow and highlight; past and present; banality and transcendence.