Roll on, thou deep and dark blue ocean, roll. 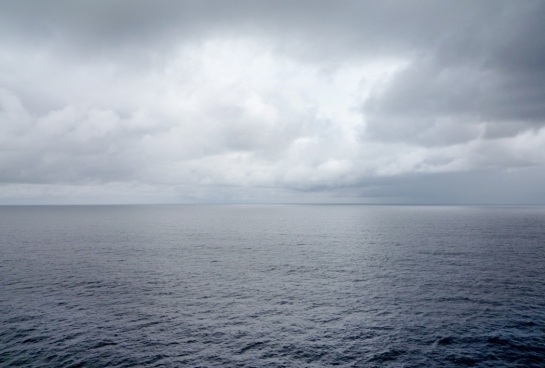 I am sitting at the edge of a continent, looking out at a flat expanse of grayish blue, which falls away from me, and when I force myself to notice it, rolls downward at the horizon and below my line of sight – it is the rounded top of a ferris wheel revolving eastward at some speed.

Nearer to shore, the color is broken with bands of white, breakers on the beach, but further out it is expansive. Somewhat below the horizon, far out to sea, a hurricane is sending its message in waves to our shore. Wind blows the trees nearby, and the surf is riled. There is mizzle in the air. The storm has passed here once again, only glancing at us as it moves by.

When we are young, the sea is romantic. It is the cradle endlessly rocking, we write poems about it, spindrift and seawrack, we stare out at it as if we were expecting to discover our adventure.

Many of us manage to maintain this sense of awe in the face of the waters, but for others, the sea has become a summer rental, or a weekend away from the city. If you were privileged to sail across the ocean on a ship, you will change your attitude in another way: It will become a daily monotony of wet flatness. Either way, the ocean will lose some of its mastery over us.

It is the edge of a continent. I have been back and over that continent more times than I can count, and have a body memory of its extent. I know in my bones the size of it, measured in days on the road, in the exchange of one horizon for the succeeding one. There are hills, cities, forests, grasslands, rivers, traffic lights – let’s not forget the traffic lights – and the homes of friends we stop to visit. 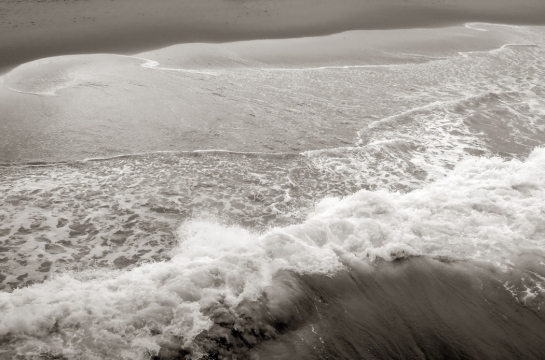 Looking east from here, though, out to sea, the globe is not speckled with features; it is uniform, save for the wiggle of waves and the rise and fall of the swell. It is a face without eyes, nose or mouth. And one senses that if you were to reach the horizon – that edge of your vision from any single location – you would find only another, identical horizon the same distance hence.

Inland, the picture is busy, it is our daily lives, the commerce between people, the schedules, the hubbub, the striving, the disappointment. It is populated and squirming. In that sense, it is life. 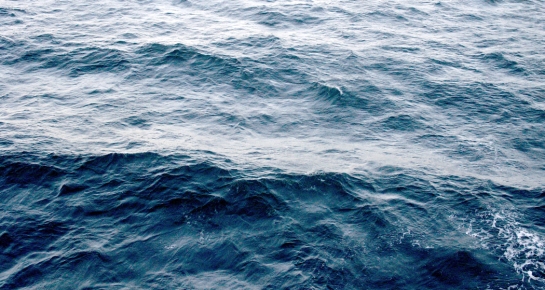 Outward, the sea shows us blankness of the non-human cosmos, seeming to be unlimited, at the very least, with no surveyor’s stakes plotting out squares of ownership. It is the blankness of death, and therefore, death itself. It is why we stare out at it, why it stares back, why it fills us up so we are like a bottle overflowing.

I have seen three of the planet’s oceans and several of its smaller seas – small but still immense. I have lived on the Atlantic shore and on the Pacific Coast and felt very different oceans. I have sailed on both. I have seen the Indian Ocean, and felt the warm, humid air, thick as a fur coat, from its shore. I have seen the North Sea and the Mediterranean, the Gulf of Mexico and the Sea of Cortez. And all of them leave me with a sense of a flatness stretching out like a drumhead, but curling down over their horizons, and always, I know that past that eye-reach is more flatness. More water; more swell, more wave, more whitecaps, more low clouds, shifting with the barometer.

The oceans are not infinite, I know. They are not eternal, I know. Byron’s encomium is nowadays wishful thinking: “Man marks the earth with ruin; his control/ Stops with the shore.” Pace Byron, but we are fouling the seas quite efficiently now.

Nevertheless, that does not change our sense of the watery parts of the world. They beckon us to our life adventure – at least in our minds, they do – and they speak what Whitman called the low, delicious word, “The word final, superior to all.” 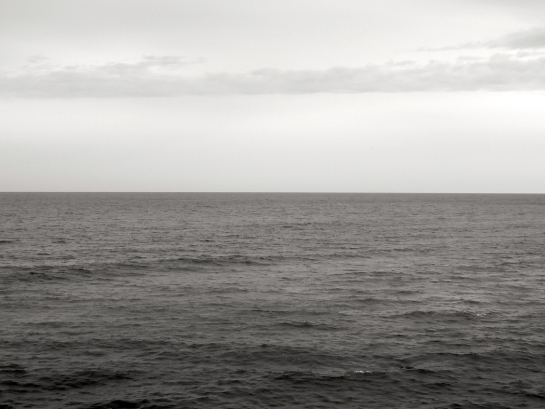 They remind us of the vastness of the universe, our measly place in it as pismires, our short parole upon the watery planet, to be revoked at a time unknown to us – a knock on the door, a suitcase packed ready to go.

No doubt it is why the oceans look so beautiful to us. They promise that there is something larger, less transitory, less mutable.

I look out on the Atlantic this morning, storm offshore, waves pawing the sand around like a cat playing with a mouse. I look up at the clouds, gray as the water beneath; I look beyond them. 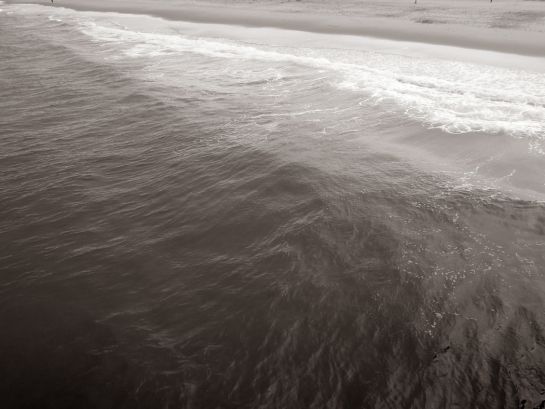 “If they but knew it, almost all men in their degree, some time or other, cherish very nearly the same feelings towards the ocean with me.” 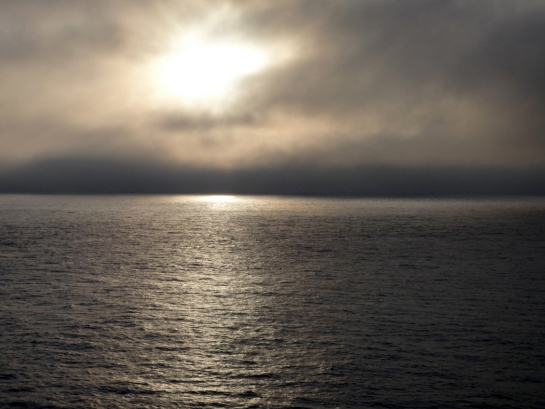 Life is made up of experiences. Not thoughts, but body-experience. It is what brings us wisdom, what brings us the game pieces we draw out of the well of our lives, that make up our literature, our art, and the myths we make of our own lives. Experiences are the building blocks of our psyches.

And the experiences of one generation are different from those of the next or the previous. We can never really know what it was like to be in Napoleon’s army or Wyatt Earp’s Dodge City or on a viking ship sailing the coast of Greenland.

Our children will never know what it was like to be us. You didn’t listen to your parents lecturing you, and you shouldn’t expect your children to be any more interested in what you have to say to them. Experience, it turns out, is non-tranferable.

But, at times, we get hints. Some bit of the past reoccurs and we get an insight.

There is little in travel so romantic sounding as a trans-Atlantic ocean voyage, and little in reality quite so tedious. When I was a teenager, I got the chance, in the dying days of ocean liners, to sail from New York to Oslo aboard the MS Oslofjord. 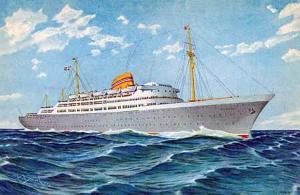 Day after day, the horizon remains pancake flat, and the only thing that changes is the dining-room menu.

Maybe it was because I was young and most passengers seemed so ancient: Shuffleboard was the amusement of choice, followed by casino night in the lounge. Neither was particularly appealing to me.

Yet, despite the monotony of the weeklong voyage, there is something about the sea that lodges itself deep inside and refuses to go away, even all these years later, in an age when crossing the ocean on a ship is no longer a realistic possibility.

It began in New York, a harbor crisscrossed by wakes like particle trails in a Wilson cloud chamber. The ship I was on threaded its way among the bee-buzz of harbor activity and passed the Statue of Liberty, which my grandmother saw on entering the same harbor in 1905, when she was a little girl.

I was on my way to the ”old country” to see where she had come from and was taking a boat, just as she had coming the other way.

But you can’t get the feel of ocean travel while in the harbor. You have to get out into the sea swell for that.

If you have never been out there, you might not have any sense of just how hilly the ocean is. Sure, the horizon looks flat, but nearby, you can sense the shifting pileup of waves of all sizes.

On the water’s surface are the wavelets, blown into white horses by the wind that always blows at sea. And the wavelets skitter up and down with the larger waves that move with more stately pomp, coming at the ship from all directions and crossing each other in patterns so complex that even chaos theory has a hard time dealing with them. 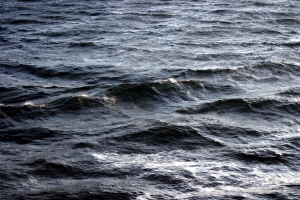 But more impressive is the slow, almost geologic movement of the swell, that massive up and down that is measured by the rise and drop of the ship.

On some days, the swell is hardly felt, as the calm ocean sprinkles the sunlight in its shivered surface. But out in the North Atlantic, it is never long before some distant storm rocks the water into the swell that is the oceanic equivalent of the long ridge mountains of eastern Pennsylvania, one after the other, up and down, twisting the ship into yaw and roll.

The constant rumble of the engines shake the walls in ”D” deck, deep in the hull of the ship. Every surface is painted and repainted and each iron surface is covered in enamel like the thick shiny glazing of a doughnut. In the stateroom, there is no sense of motion, only the vibration of the engines. It has been the same for six days.

In midsummer, the sun doesn’t set until nearly midnight, rising again a few hours later. Most of the evening is spent in the low sunlight, which rakes the waves into glitter.

And I am up at 3:30 in the morning, walking the decks of the ship, which seems ready to roll over on first one side and then the other. Nearly a week into this trance-inducing boredom, I have read all my books and cannot sleep any more. The walk on deck in the dusky dark is meant to wake me up from the hypnotic state the ocean can put you in.

Then, out in the darkness I can see a light, miles off through the humid air. It is another ship going the other way. But no, it is not a ship, the lights are too irregular. In the growing light, I can begin to make out the grayish shape of it, barely legible in the murk.

It is one of the Orkney Islands, off northern Scotland. The trance is broken. The Atlantic is crossed, land is sighted.

I have some sense of what Columbus must have felt, although I have eaten better than he did, and my six days is rather less than the months he spent at sea.

But I still felt something special when the sea birds once more began flying overhead.