If Mr. Yelverton had a first name, I never knew it. Everyone used the more formal address.

He ran a barbecue restaurant in Greensboro, N.C., and I knew him in the early 1970s. To call it a restaurant is an exaggeration: It was a hole-in-the-wall behind the main line of storefronts along the city’s main street. Butted up against the brick back walls of department stores and banks, Yelverton’s Barbecue faced only a parking lot.

Mr. Yelverton was thin, wiry, with high cheekbones and short silver hair and with the reserved demeanor of a gentleman. He made pork barbecue in the eastern North Carolina style. 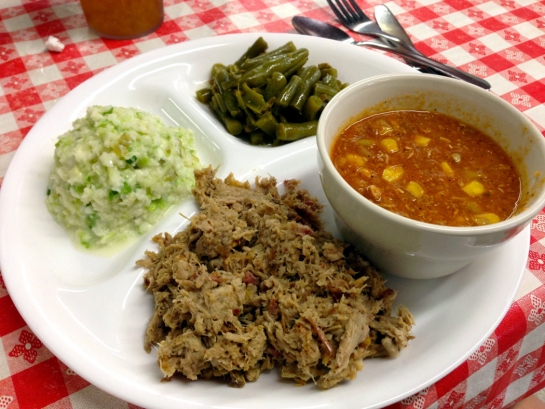 Most people who know anything about barbecue know that the nation is subdivided by regional chauvinisms. There is Kansas City barbecue and Texas barbecue. Even North Carolina is split between Halifax style — eastern North Carolina style — and Lexington style.

It was a time of rapid change in the South, and change in Southern cooking as well. Many local barbecue establishments had changed their method of making hush puppies, using a new device that extruded corn batter into the hot grease like a carnival funnel cake. Mr. Yelverton didn’t approve.

“I never saw the advantage of doing things faster and easier,” I remember him saying one day. He showed me his technique.

“You mix up your cornmeal with water,” he said, making a stiff, granular dough rather than a batter. “Then you take a dollop of it up in a serving spoon.” He had a large, steel-handled spoon about 15 inches long. “Then you use the back of a tablespoon to whip off bits into the grease.”

Each serving spoon was subdivided into four or five hush puppies, each cut away from the gob with a flick of his wrist on the convexity of the tablespoon, leaving a perfect hush puppy, shaped like a lemon wedge, with ridges. They turned a beautiful, aromatic coppery color and were absolute heaven when you bit into them hot.

Recently, my wife and I were back in North Carolina and, though Yelverton has long gone, we stopped at a barbecue joint in Shelby. The hush puppies had changed: Not only were they plopped into the grease via the ubiquitous extruder, making little round cigar shapes (I’m being polite), but they were made with added onion and sugar.

“That’s not a real hush puppy,” my wife said. She can be very strict when it comes to the right way to do things, and hush puppies with sweetener counts for her not simply as a variant, but as a perversion.

“Hush puppies don’t have sugar in them,” she stated categorically.

My wife is typical of many Southerners: certain the way she grew up was the “right” way. It fuels many a heated discussion. You get obstinate opinions about whether to soak country ham, about whether Brunswick stew requires squirrel meat, about the best apple to fry.

“I like June apples,” my wife says. “My great-grandmother said they were the best.”

Her great-grandmother was a genuine Civil War widow and had the bona fides.

If there is one thing that defines Southern food, it must be the soil, the terroir, the sandy podzols of eastern North Carolina or the black loam of the Mississippi Delta. You can see it in the flesh of catfish made pink by the red-clay river bottoms.

Like patriotism, food preference grows from the land where you grew up and the people who raised you. It is what you know and what you are comfortable with.

Southern food is divided by region, by class, by race. The food of Louisiana is sui generis. The menus of South Carolina plantations were more upscale than on the small farm holdings in Piedmont North Carolina or Virginia. The hardscrabble diet of the Blue Ridge Mountains is something else again.

Yet, there is a certain overlap. Soul food and Southern cooking emphasize different aspects of the cuisine but share more than they don’t. Cooked greens, side meat, cornbread — these are the common denominators.

The original of both was humble — pronounced “umble” without the “h.” It was food grown on family farms, from hogs slaughtered on a frosty morn and made into sausage and head cheese.

There is nothing fancy about it. I remember once a friend visited from New York, where he was an investment lawyer. We took him to Shatley Springs in Ashe County, N.C., where they serve family-style meals with piles of fried chicken, country ham, boiled greens, scraped corn, hot biscuits, mashed potatoes and gravy so thick a knife can stand upright in it, served with little dishes of corn relish and pickled beets and washed down with sweet tea.

“I loved it,” he said later. “Especially the chicken sauce.” Chicken sauce! We all laughed good over that one.

There is an upscale Southern cooking. It comes from plantations and includes such things as peanut soup and Sally Lunn bread and Lane cake.

But for me, the best is the down-and-dirty recipes that came through grandmothers and aunts. Foods so primal there aren’t even recipes for them, like the dog bread I came to love — a form of cornbread so basic its ingredients might as well be earth, wind and fire. I first ate it in Halifax County, among the cotton fields and abandoned tractors, pickup trucks and windbreaks of oak trees. I asked how to make it.

“First, you mix up a mess of cornmeal,” she said. No half-cup of this, or 6 ounces of that. Just mix up a mess.

That’s white stone-ground cornmeal, if you are brave enough to try this, with salt and enough water to make a thick batter or thin dough.

In a black-iron fry pan, you melt some bacon grease or the renderings from streak-o’-fat-streak-o’-lean and heat it up till it sputters at you. Dump in the cornmeal and stick it in the oven till it’s done. Can’t tell you how long. It depends.

When it comes out, it is heavy as a transuranium element, with a thick, dark undercrust that makes it all worthwhile.

Cut it into wedges and use it to soak up your “pot likker” or your sop.

There are seven defining ingredients in Southern cooking. From Virginia through Alabama and out towards eastern Texas, these are the comestibles essential for your pantry.

The hog is Providence’s gift to the Southern belly. Pork is central to so much that defines the cuisine, from barbecue to country ham to the many varieties of bacon — side meat, fatback, not to mention bacon grease. Nothing seasons pintos like ham hocks. “The hog seasons everything that isn’t him,” said one Southern cook. Pigmeat also defines the McCoy-Hatfield divisions between those who soak their ham before cooking and eating it and those who cherish the crust of salt that develops as they fry their slice of unsoaked country ham in a black-iron frying pan. Special mention should be made of liver mush, which is to North Carolina what scrapple is to Philadelphia. 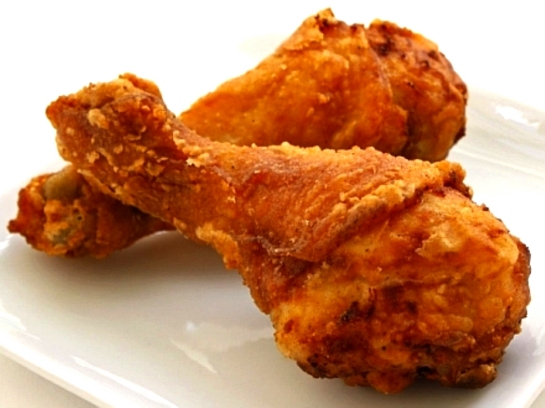 There is almost no controversy over fried chicken. It defines White Southerners and Black Southerners, upper-crust and redneck. Fried chicken, slowly cooked in a black-iron frying pan till it’s brown and crusty on the outside and hot and juicy on the inside, is the very badge of Southern regional pride.

You don’t find a lot of yeast breads, but baking-powder breads are all over. Biscuit dough can be baked into biscuits, buttered, covered in jam or jelly with dinner, or split in two and slathered with gravy for breakfast. It can also be dropped into boiling stock with cooked chicken to make dumplings. On the other side, cornbread can be baked in a sizzling-hot frying pan or in a black-iron form to make cornpone, or dropped into hot fat to make hush puppies, or, what may be the best, cornbread cakes, which are cornmeal pancakes, buttered and served in a stack with your pintos. You can’t beat a meal of fried fish, caught yourself, with new potatoes and scallions, eaten with a helping of cornbread crumbled into buttermilk.

The recipe reads, “Cook up a mess of greens.” This means you take a pile of collards or mustard greens, turnip greens, young pokeweed, or peppery “creasy greens” — which is wild watercress, “the caviar of Southern greens,” one woman called them — and cook them down with some fatback or bacon until they are a fraction of their precooked volume. You serve them with vinegar, and don’t forget to sop up some of the “pot likker” with your cornbread. 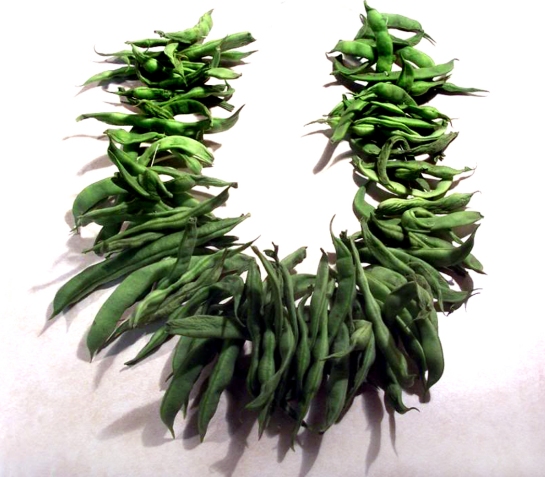 The number of varieties of Southern pulse is immense — field peas, Crowder peas, black-eyed peas, pinto beans, butter beans — and whether dried or fresh, makes a daily contribution to the plate. A variety of green beans, dried on a string on your front porch, is called “leather breeches” (or britches) and when reconstituted in a pot of water with seasoning meat, develops a deep flavor almost beeflike in character.

In France, they say, “La sauce c’est tout,” the sauce is everything. In North Carolina, they say, “Could I have some more gravy on them biscuits.” A Southern gravy is sometimes so thick you might be forgiven for thinking it is mortar for bricks. Gravy comes in many forms: sawmill gravy, red-eye gravy, chicken gravy, chocolate gravy.

Finally, you can barely survive in the South without pie or its kissin’ cousin, cobbler. Sometimes, lunch is just a slice of pie and a cup of coffee. Southern food isn’t always the most heart-healthy, for sure, but as one Southerner put it, “Is there a better way to commit suicide than pie?”