Someone, and I can’t remember who, once said that the best way to critique a photograph is to make another photograph.

You can learn a great deal by the doing — a great deal more than by reading or hearing lectures. In the past, painters learned to paint by copying master paintings in museums (you can still take canvas and easel into the Louvre, with proper permission, to copy). 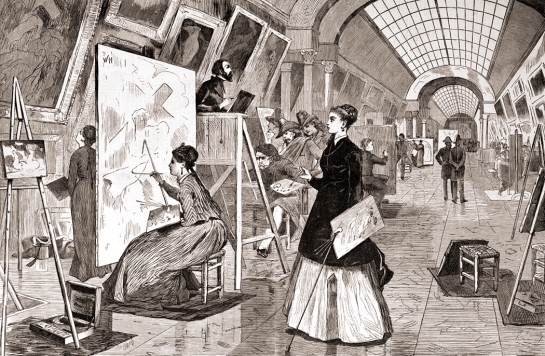 If there’s any one thing that you discover by the process, it is that it ain’t easy. Things you hadn’t so far considered turn out to be crucial. I tried this many years ago, wishing to take black-and-white large-format photographs of waterlilies to find out what, besides the color, went into the structure of Monet’s paintings at Giverny. The color is so dominant in the images, that we too easily forget the form.

There is form in them, but very like the harmonic structure of Debussy, it is subtle. The black-and-white photographs I made amplified form over color and made for very different results.

Years later, at Giverny, I made color photographs of the waterlilies and the resemblance to the paintings was much more overt.

This sort of copying, in order to learn, is something I have always done. I have a self-portrait, made in 1980, when my beard was still dark, that mimics Van Gogh’s portrait of Dr. Gachet.

Of course, Van Gogh himself was well known for copying to learn, such as his oil-painted imitations of Japanese woodblock prints. The translation from Hiroshige to Van Gogh tells us a great deal about the Dutchman.

A portrait I made of Sharon Vernon in the early 1970s patterned itself on Degas’ Woman with Chrysanthemums.

In 2011, I extended the copy to a series. As art critic for the daily newspaper in Phoenix, Ariz., I spent a lot of time at the Arizona State University Art Museum. It was housed in the Nelson Fine Arts Center, which opened in 1989 on the university campus. 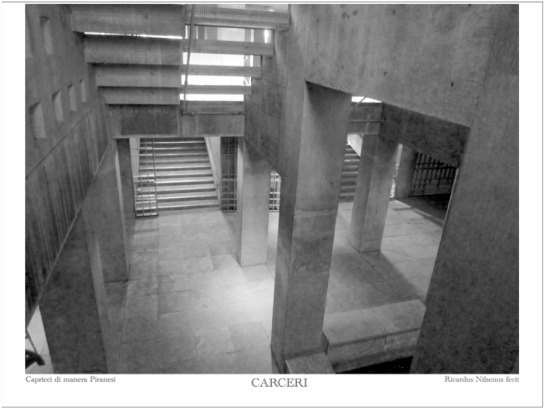 The building was designed by noted architect Antoine Predock and won many awards — although there was a significant backlash from more conservative commentators who thought the windowless building looked too much like a prison.

The building itself was a labyrinth of stairways, running up past others descending. There was a barred gate at the underground entrance to the museum, and many sight-lines that seemed to defy logic. 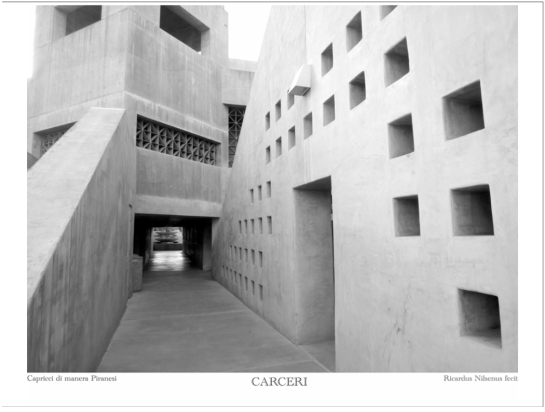 The entire complex is immense, and includes a theater, an outdoor movie screen and staircase that goes nowhere. But it is the art museum and specifically the entry to the museum that I was concerned with. 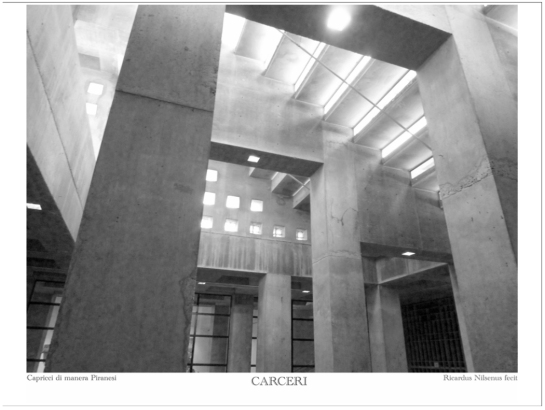 Of course, my source material — the Piranesi etchings (Link here) — are quite dark and airless. They are dungeons, after all.

In contrast, the Nelson Fine Arts Center burns in bright sunlight, with bright walls. So, it would not be the murk I was trying to recreate in the photos.

Instead, it was the hallucinatory perspective that I tried to capture, the sense that up wasn’t always completely up and that down wasn’t always clear.

I must note that I am not claiming for these exercises the status of art. Whether or not they achieve that level is quite beside the point for me. 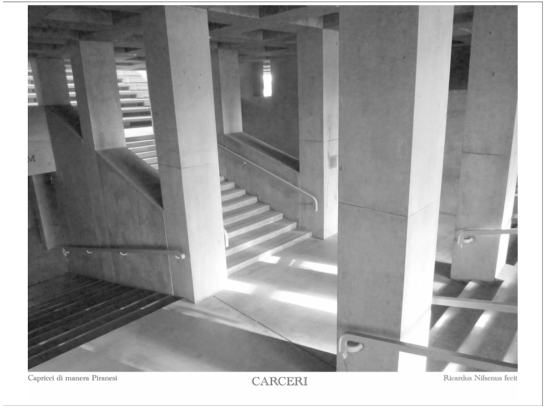 I wound up with 24 prints, compared with Piranesi’s 16. The set, printed out on archival paper, I gave to the director of the art museum as a gift.

I kept another set for myself, and I had the digital versions to arrange here for this presentation. At least, here are 16 of them, to match the number of the Carceri.

I am also not the only one to consider the Nelson Fine Arts Center as a photographic subject. 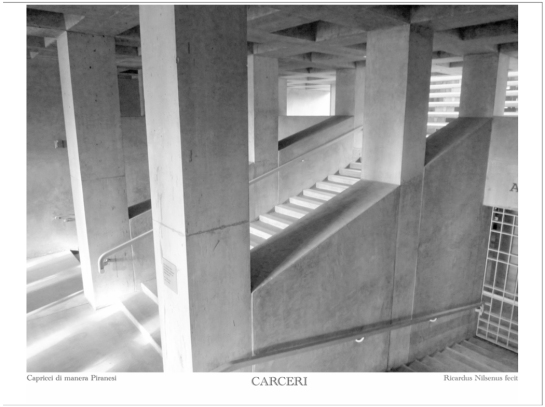 Arizona photographer Johnny Kerr has also attacked the building for a series; his series, however, is more consciously graphic, and sees the shapes and shadows as a form of Minimalist art.

You can see his version at: (Link here).

Imitation, such as my meager attempt, is a great way to learn what you cannot just through cogitation. You get to engage with the physical world and see how it becomes transformed in the act of having its picture made.

It reminds me of Garry Winogrand’s manifesto: “I photograph to find out what something will look like photographed.”

But it goes beyond that. It makes the three-way connection between the subject, the photograph, and the long art history that stretches out behind us. Each photograph is a hinge between the real, physical world we wish to capture and its echo in the accumulated culture.