“Surely only one of the reasons,” I said. “Let’s not forget Plato was a fascist pig,” I said, only half jokingly. “But why ‘oooh, language.’?” 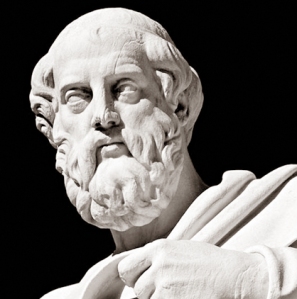 “I can’t blame only Plato for this, but most of us habitually think of the world in terms of nouns; we name things and believe we have described existence. Plato’s so-called ‘forms’ are little more than sanctified nouns, nouns privileged as ultimate reality. But truly, nouns are only resting places for things in motion, as if a snapshot could be more real than a movie.”

“I’ve been writing about that for years,” I said. “I don’t know how many times I’ve reiterated, ‘Nature is a verb.’ The Heracleitan flux rather than the Platonic stasis.”

“Yes, yes.” There was a tone of impatience in Stuart’s voice.

“I mean,” I continued, “that Plato would have us believe in an ideal  marigold, say, and any real flower can only approximate the ‘real’ one. But I say, the marigold is not a thing, but a process. Depending on where you start, it is a seed, a seedling, a sprout, a plant, a flower bud, a flower, a fruit that bursts into seeds, which fall and start the whole thing over. A verb.”

“And that doesn’t even task Plato with the question of whether an ideal marigold is a red one or a yellow one, or if there are separate ideal forms for red and yellow marigolds, or whether that is different from an ideal flower, or from an ideal plant, or ideal living thing: Where do you take your category from when positing these damnable ideals?”

“So, nouns are only place-holders, parking spots for verbs. Being Greek, Plato has in mind an ideal human being, which is, of course, male, and young, maybe 20 years old. But a man, like the marigold, is always on the move — an infant, a child, an adolescent, a youth, a grown man, a father, a middle-age man, an old man, a geezer, a corpse. We move through it all. Panta horein.”

“Let’s not forget women, too, with perhaps their own verbal cycle, parallel, but often diverging from the man’s.”

“And let’s also not forget,” I added, “that the hangover from Plato’s noun-based reality is the demotic Christian sense that when we get to heaven we’ll be our ‘ideal’ selves, not the decrepit senexes we have become before we die. Heaven is full of beautiful people, in their ideal perfection — which is defined, as Plato would have it, as ourselves when we were, say 20. Maybe 25.”

“This is all well and good,” Stuart said. “But I have a quibble.”

Stuart always had quibbles. This explained the earlier impatience. He wanted to get on to what he was really thinking about.

“The view of existence — metaphorically of course — as a verb is existence seen objectively, as if we were gods looking at the universe and seeing a vast process in motion. But if we were to look at the cosmos subjectively, from our individual points of view, then the essential word-form is the preposition. The preposition and the conjunction.”

Now I knew the trolley had arrived in Stuartville.

“These tiny words, barely noticed as they whiz by in a sentence, are the key words that describe our place in the universe, and our relation to it. They are the most important words. They create whole plots, whole novels in two or three letters. ‘By,’ ‘over,’ ‘near,’ ‘but,’ ‘and’ — they force us to create at least two nouns — they give birth to the nouns — and make us see those two nouns in a relationship, and what is more, they imply movement, or at least imply a temporal situation.

“In the beginning was the word, and that word was a preposition.

“The Greeks recognized that certain sentence formations had meaning in and of themselves. Like, ‘on the one hand, blah blah, but on the other hand, blah blah.’ or ‘He says blah, but his actions prove blah.’ The sentences can be filled in with various content, but the structure of the sentence carries its own meaning, a description of a part of reality.

“But I am saying that the same thing can be said for the simple ‘but.’ You don’t need the whole sentence. Just a ‘but.’

“It implies a stop sign; a motion forward, but a redirection. There you are, a point in the universe at motion, under the rule of inertia, unstopping unless another force is applied, and suddenly, ‘but,’ and that force is applied. The conjunction has cosmic meaning.

“The prepositions do the same. You are that point, with no defined volume, mass or blood — at this moment, completely undefined except for your beingness, your awareness, and then, you are driven ‘under,’ ‘around,’ or ‘through,’ and with the advent of the preposition, you have a relationship to that cosmos.”

“It all sounds very, well, cosmic.”

“Yes, it is. Or at least, it is like a thought experiment. You don’t need to have a dog or a truck or a marigold to have the relationship. It is inherent in the ‘if,’ ‘and’ or ‘but.’

“Which is why I say that the verb is a description of the objective, divinely- observed universe, but the conjunction and preposition are the same for a subjectively sensibility-observed universe.”

“But — and I use the word advisedly — you are an atheist.”