In the 1920s, a fundamental change occurred in the part of photography that was attempting to be seen as art. What had always previously been seen as a picture of something became a picture of its own.

In this, it followed the progress of Modernism in other media. What had been a photograph of a house or a boat, and judged by how well it set off the house or boat, it now became an arrangement of grey and black, of line and form.

If anyone could claim to be the leader of this shift, it would be Alfred Stieglitz. “I was born in Hoboken. I am an American. Photography is my passion. The search for truth is my obsession.”

Despite his tendency toward oracular declamation — or perhaps because of it — Stieglitz became the prophet of a new type of photography in America. Modernist. 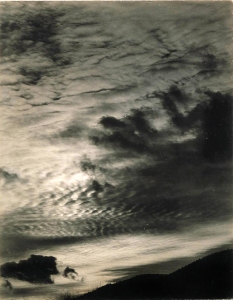 His first work, from the late 1890s through the 1920s was mostly figurative, but he became dissatisfied with the idea that his photographs were praised for their subject matter.

In 1922, he began photographing clouds and turning them into the equivalent of abstract paintings.

“Through clouds to put down my philosophy of life — to show that my photographs were not due to subject matter — not to special trees or faces, or interiors, to special privileges — clouds were there for everyone — no tax as yet on them — free.”

These first series of cloud abstractions he called “A Sequence of Ten Cloud Photographs.”  When he showed a new series in 1924, he renamed them “Songs of the Sky.” He continued making these prints, usually exaggerated in contrast and printed quite dark, making the blue sky black. He made them by the dozens, and by 1925, he was calling them “Equivalents.”

“I have a vision of life and I try to find equivalents for it sometimes in the form of photographs…(Cloud photographs) are equivalents of my most profound life experience.”

This idea of “equivalents” was later taken up and expanded by photographer Minor White and others, but in essence, the abstraction of the clouds were to stand for “equivalent” emotional and intellectual experiences.

There is certainly a grandiosity to Stieglitz’s language, indeed to his person. But the photographs remain and many of them are deeply moving, perhaps compared to the late quartets of Beethoven.

But the underlying idea was that the medium of photography, rather than the subject matter the camera is pointed at, could be expressive: that the surface of palladium printed paper, or silver prints, and the blacks and whites of the silver on its surface, and the shapes they make, almost as if a Rohrschach test, could be sufficient for art.

Abstraction became a subset of 20th century photography, and even when there was a subject, such as a portrait or landscape, the photographer, whether Edward Weston or Paul Strand, or White or Bill Brandt, would insist on its essential abstraction as the basis of its value.

But there is a problem with this: Those Equivalents that Stieglitz made are still clouds, and clouds carry with them all the baggage of subject matter. From the clouds in Renaissance paintings through the glorious cumulous in the seascapes of Aelbert Cuyp to the drawings of Alexander Cozens and countryside of John Constable. Clouds are an endless source of inspiration for the imagination of shape.

In photography, it is almost impossible to eliminate subject matter, short of making photograms. The forms, colors, shadows, textures of the recognizable sensuous world keep intruding, no matter how extracted from context. When I was a teacher, one of the assignments I gave my students was “to photograph something so that I cannot tell what it is.” I expected them to get ultra close, or turn something upside down, or extend the contrast. But, try as they might, I could always tell what I was looking at.

I do not see this as a deficiency in photography, but a strength. Photography can keep us tethered to the world when we might wish to float free; it reminds us that our primary obligation is to the existence we occupy and work in.

Given that, photographs of clouds still has a powerful attraction: We can see that abstraction and reality are not necessarily in opposition: We can have both at once.

Put this way, it seems obvious, a commonplace. But this “double vision” is one of the things that keeps art lively, and informs our interaction with the everyday — keeps us aware that the world is alive, not inert.

And so, I have made my own cloud photographs. The first series, seen here, are a rank imitation of Stieglitz’s Equivalents. The next blog installment will follow with the development of the idea. 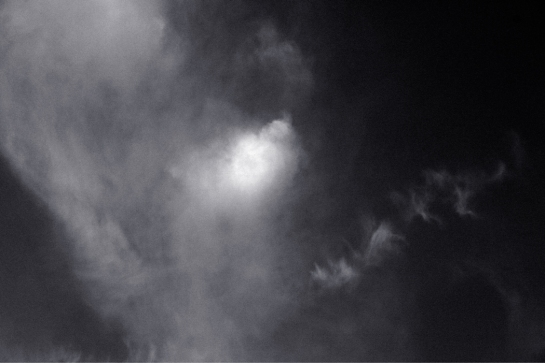 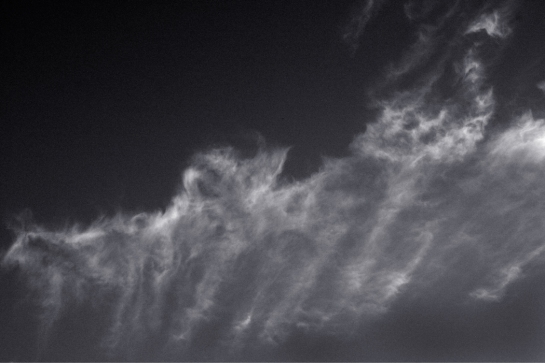 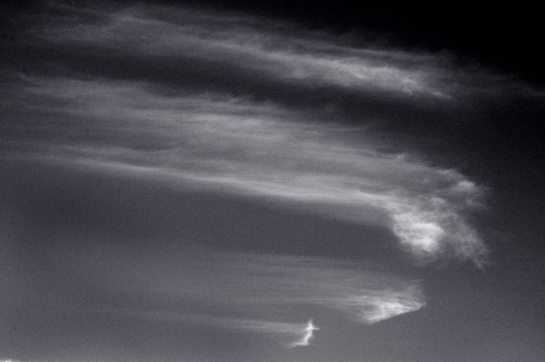