If there is one theme that overrides the whole set of notes on our trip to France in 2002, it is that of the French love of “logique” and systemization, versus the older Gothic love of “the things of this world.” Even the Baroque in France is oddly static and toned down. So, when we finally got to the megaplex that is the Louvre, it is hardly surprising that the same questions arose again.

After nearly two weeks, we finally made it to the Louvre. It isn’t that we weren’t interested, but we’ve had a lot of other stuff on our agenda, mostly dealing with Gothic churches. 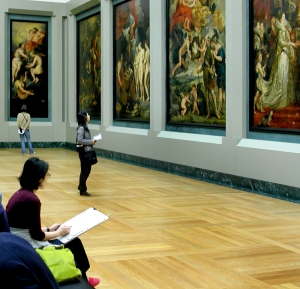 To say the Louvre is big is to say the Pacific Ocean is wide. It hardly covers it. We spent the whole day there and saw maybe a 20th of it. We saw parts of the Greek statuary, the northern European late Medieval painting, the big hall of Italian Renaissance and Baroque painting and a few halls of French Baroque painting, to take in the Poussins and Claudes, which I was hungry to see.

That not only wore us out, it took from about 10 a.m. to about 4:30 p.m., when, exhausted and with throbbing feet, we finally set our course back to the hotel.

There is a problem seeing so many “hall of fame” paintings, so many “greatest hits” in one go round. You cannot do much but cover the highlights and you look at one famous painting after another and take notes on this small aspect or that: the way the brushstrokes feather in Leonardo’s

Virgin and Saint Anne; the overall bluish caste to Ingres’ Odalisque; the tricolor reflections of the water drops in Delacroix’s Dante in the Boat.

It isn’t just that there wasn’t time to spend an hour or two with each masterwork, but that just being in the Louvre, with the crowds of tourists, and the hugger-mugger of Jansen regulars, the occasion of it all, prevents you from being able to concentrate.

Here is Raphael’s Belle Jardiniere, there is the Mona Lisa. Here is the Avignon Pieta, there is the Bust of Homer. You take them in with the instantaneity of an art appreciation slide show, one after the other. Even if you wanted to spend a few extra minutes with the Wedding at Cana, there is Liberty on the Barricades calling to you.

Which is all a terrible shame, because even with the little time you get to spend with each painting, you recognize once and again, deep in your eye sockets, how different the real painting is from the picture in the book. The 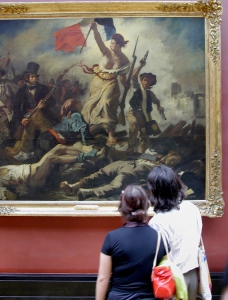 thickness of the layer of oil paint, the fineness of detail, the actuality of the color — uncaptured by the cyan, magenta and yellow inks in your Jansen text — gives you that sense of quiddity, that sense of thusness, of actualness, of event, of richness, of sense experience, that the pictures in the book can never deliver.

It is probably the ubiquity of reproduction that has led to the pathetic and word-ridden French philosophies that rule art criticism currently. All you can get out of the reproduction is the iconography, which is the intellectualized part of the painting, and if that is all you get, you miss the sense experience, which subverts the intellectualization and renders it shallow.

For me, this is most evident in the northern Medieval and Renaissance paintings, which have a textured surface of paint, mimicking the damasked cloth being represented, or the gold leaf which sits atop the oil paint.

And what a deep and satisfying green Van Eyck has found. You can practically see it as ground up emerald or other jewel, suspended in the oil. The green is dark, intense as a clear night and transparent as stained glass.

When one sees a real painting, one knows great beauty, and great joy in its apprehension. Though it soaks in through your eyes, you feel it in your fingertips, smell it, taste it, and almost hear it. It makes all your senses buzz.

Part of it is taste, certainly — gout. Others may prefer the Italian Renaissance to the Northern one, or may really like the sweeping flesh tones of Rubens or the sausage fingers of Ingres. But whether it is the vermilion in the cloth painted by Poussin or the ultramarine of Mary’s robe in a million other paintings, the direct, uninterpreted experience is the primary gift of great art.

Of course, not all the great art in Paris is paint. 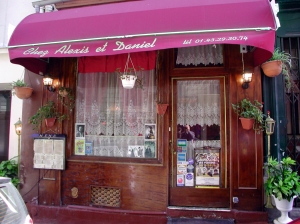 We went back to Chez Daniel et Alexis for dinner tonight. The tiny toy pinscher met us at the door and followed us to the table. He must have remembered my petting him the other night, because he was all affection. He climbed up on the seat next to me and nuzzled his little nose in my coat the whole time we ate supper.

Which was, again, magnificent. Carole’s asparagus in melted gruyer was heaven in a dish. Our chicken plat, stuffed with mushrooms, was tres bien, and our desserts — well, we couldn’t finish them.

And this is only dinner. For lunch, we ate at one of the Louvre restaurants and had quiche with tomato and chicken in it, and desserts: Carole had three little custards, and I had chocolate.

It is embarrassing to keep on about the food, but food by itself is sufficient reason to visit Paris. Everything else is gravy — I mean, sauce.

Felt good all day because I wore black, like the French women. And fashionable shoes, rather than the athletic shoes I’ve been wearing.

Thrilled to be going to the Louvre. I still can’t believe we went.

We got a beautiful bouquet of lilacs for Lauren, our waitress at Le Petit Cardinal and she was very pleased.

Now, at the Petit Cardinal, no one even asks us what our breakfast order will be. This morning, it was simply delivered to our table.

Richard hugged me on the way down the steps to the metro and smiled at me.

There’s no highlight better than that.

The Louvre was vast and I was amazed. I thought it would be like the old Smithsonian, with paintings from the floor to the ceiling, and the interior spaces jammed with objects, but it was very open and some rooms had only three paintings. I saw the son of god crucified for probably four continuous hours and then a lot of rosy flesh flying through the air (Rubens). A whole lot of satin flying through the air. But the first part of our visit to the Louvre was my favorite, seeing the northern European late Medieval paintings of the Virgin and child, and other religious subjects.

Near the end of the day, after seeing all of the extravagant paintings on biblical subjects and historical paintings, the museum began to smell funny to me, at first it seemed like the bathrooms, then I thought maybe it was the restaurant. Then I became disgusted with what I thought might be the smell of all the people. And then, because I was getting so tired, I began to have a horrible feeling that I was smelling death around the old Grecian tombs and I was very happy to go out into the air.

On the way back to our hotel, we stopped at a perfumerie and I had a wonderful time there and got some Lalique for Paul, Jolie Madame for mother and a little tube of cologne for Aunt Veosie and a bottle La Nuit for myself. Jasmine.

I chose perfumes you could only get in France. These are not exported.

We came back and rested. And the sweetest part of the day was seeing the little dog nestled against Richard in the restaurant. 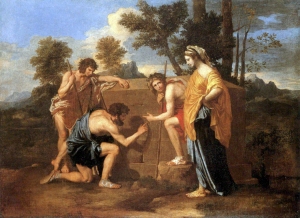 I was a bit surprised at how loose much of Poussin’s paintings are, and especially, how dark, brown and gray they are. How much of the dinginess comes from too much varnish over too many centuries and how much was by design, I cannot tell.

I wanted to love the Poussins more. But I have to admit, on the whole, they seem constipated, both in subject matter and in execution.

The Claudes fared a bit better, although they also seemed yellowed with ancient varnish. Perhaps the film of yellow suits him better than it suits Poussin.

But, ultimately, the Claudes disappoint, too. They are simply too far removed from real experience, too stylized, too fantasized. Too intellectualized, and not immediate enough.

Unlike the Memlings, Holbeins, van der Weydens and — hallelujah — van Eycks in the northern European section, which bristle with real experience.

Constitutionally, I also respond to the textures of those early Flemish and German paintings, with their tight patterns and brilliant color, so unlike the artificially brown and slate tones of the French Baroque.

It wasn’t really a big surprise to see how vast the Louvre is. I knew it was big. But I was surprised by several familiar paintings that are much bigger than I ever imagined: Veronese’s Wedding at Cana; Gericault’s Raft of the Medusa; David’s Rape of the Sabine Women; Gros’s Napoleon at the Pest House of Joffa. They would have taken scaffolding to paint.

Oh, and Delacroix’s Death of Sardanapalus. Another giant.

I can’t say I was overwhelmed by the Big Noises in Hellenistic sculpture: the Venus de Milo, the Winged Victory of Samothrace. Yes, they’re nice enough, but a little too deracinated for my taste. I want either the Classical Hellenic sculpture of the Elgin marbles, or the really over the top Hellenism of the Laocoon. These marquee pieces at the Louvre seem a bit tame, and the stylization of the nude female figure bothers me: No real woman was ever built the way the Venus de Milo is — and I’m not referring to her missing arms.