It is impossible to listen to the final quartets of Beethoven and not recognize in them something quite different from the optimistic and heroic thrust of his most popular works, the Eroica, the Appassionata, the Razumovskies. The quartets in question no longer follow the standard four-movement shape of the classical quartet and symphony, and they no longer seem addressed to the world and society, but rather, they are discursive, wandering and seem turned completely inward.

It has been called his “late style” ever since 1855, when Wilhelm von Lenz wrote his book, “Beethoven and his three styles,” which attempts to give shape to the composer’s career, with an “early style” in imitation of Haydn and Mozart; a “middle period” with all those grand exhortations to heroism and the overcoming of obstacles and the establishment of freedom and individualism; to the “late style” of innigkeit and apparent formlessness.

Since then, it has become standard to view an artist’s career into three: apprenticeship, mastery, and a “late style” in which the artist perhaps gives up his public function to investigate his private concerns. Within this pattern, it has become usual to see the late period as the culmination of an artist’s life and work, as its height, as its reduced essence.

And so, we see the final paintings of Rembrandt, the late romances of Shakespeare, the last dark photographs of Edward Weston or the Ninth Symphony of Mahler as somehow special, as more meaningful, as “better” even as “best.” We look to them for something like a peroration of wisdom, the final words or notes or brushstrokes of a sage. Goya’s black paintings, or the black paintings of Jackson Pollock. (Usually, there is some element of darkness in late work, whether it is the Beethoven quartets or the quiet “ersterbend” that ends the Mahler Ninth.)

As Minor White said of the Weston photographs: “Rarely are we shown the maturest work of men who have lived richly and whose spirit has grown all their lives … the last photographs of Edward Weston made at Point Lobos … may parallel in content the last quartets of Beethoven.”

There are many problem with this formulation. First, so many artists — certainly the majority — don’t fit into this pattern. Second, while we can recognize a “late style” in the final works of Franz Schubert, Schubert died at 31. Can that be considered his late period? Suppose he had lived his three score years and ten? What would have followed his “late style?” Obviously, a late style is something we apply only in retrospect. Even Beethoven, whose late style defines the idea, died at a fairly young age of 56. Where would he have gone if he had lived to 70? His late style would then have been something transitional.

Then, there are artists whose supposed late style is generally admitted to be a decline. One thinks of the final paintings of De Kooning. And there is the problem of someone like Wagner, who strove self-consciously for the prestige of having a late style with the artificial spirituality of “Parsifal.”

There is another issue, too. Late style means more than one thing. Initially, we think of art that is intensely personal rather than public, art that reaches the darker and more private parts of the human experience. But that is not the only thing — perhaps not even the primary thing — that defines late style. As Edward Said said in his study of the subject, late style is characterized by an increasing simplicity of technique. Take those late quartets, which are a bouquet of dances, marches, recitativ and arias, and movements sometimes so short, they hardly count as movements at all. They alternate with long fugal passages where the counterpoint is hidden in blocks of chordal harmony. Even their sonata-form movements are choppy with short, punchy themes entering stage right and quickly running off stage left, chased by the next patch of tune. There is a superfluity of material and an economy of means.

It is as though an artist, a composer, a poet, had spent his youth perfecting an elaborate craft, the mastery of which is part of his declaration to the world, but having become increasingly confident of his ability, he no longer considers it to be the important part of his work. The competence is still there, but the showing-off is gone: The artist only uses so much of his virtuosity as is needed to make his point.

Another way of putting it is that when young, an artist is in love with his artform — with his villanelle, his twelve tones, his impasto — and so aware of the tradition and history of that technique, that he wants to strive to shoulder his way into that history, to take his place. But as age and its concomitant wisdom encroach, the technique seems a shallow exercise compared with the content: The balance shifts to what he has to say rather than how he says it.

As Arnold Schoenberg said, “There is still plenty of good music to be written in C major.”

This is Picasso’s arc: Early work is meant to rattle art history. He goes through his “periods,” which are each an exploration of a particular technique or “ism.” But in his later life, he freed himself to simply play with his paints or his pottery. It is clearly Picasso’s “voice,” his “look,” but the ism ceases to be the point: the work becomes an endless parade of bulls, women, birds, still lifes and images of concupiscent artists, often with bulls or women. 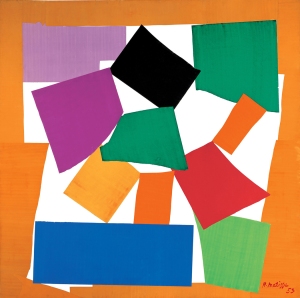 Or Matisse, who ended with paper cutouts, as simple as a child’s finger painting.

One sees this in many a career, where the young artist finds his voice and shouts to make a name, but once having established his bona fides, feels then free to explore what he is really interested in. One thinks perhaps of Richard Diebenkorn, who made a name with abstract art, and after becoming famous, started making “pictures.” 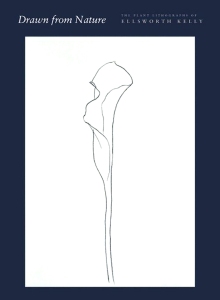 I was struck seeing some drawings by Ellsworth Kelly, who made his career with minimalist Color Field paintings — they might as well have been models for flags — but these drawings were of plants, in simple black line on simple white paper. They were elegant and expressive and nothing like the bland paintings. He has made them throughout his career, but they had been seen only once (in 1970) before they made a big splash, showing them in 2012 at the Metropolitan Museum of Art in New York. Kelly clearly loved the plant forms he drew.

There comes with age and experience — and perhaps prodded along by the awareness of the extreme shortness of life — a need to say what needs saying unencumbered by all the apparatus and hoopla that seduce our younger selves.

And this is where the simplicity of means becomes the same thing as the profundity of meaning. In his middle period, at the height of his Beethoven-ness, he can spend an entire symphony showing us how an obsessive rhythmic motiv in C-minor can grow into a triumphal shout of joy in C-major. But by the late quartets, the emotional expressions pass moment by moment, as if attention to the present were more important than presentiment of the future or reminiscence of what has gone before. There is an intensity of the now, an urgency of being present. And that is where we find the marriage of the late style’s depth and its simplicity.