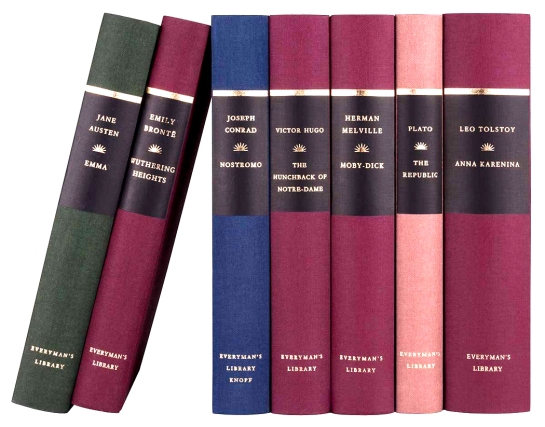 As I’ve become older, I have become less tolerant of badly-designed, -printed and or -bound books. When I was younger, often I didn’t really know the difference, or thought there was nothing I could do about it — I would just have to read whatever volume came to hand.

These days, however, if a book is the wrong size, has print too tiny, or margins to slender, or its binding cracks when opened too often, I simply put it aside and pick up another book.

It helps that the books I read are primarily classics — that is, books that come in various published versions. Best sellers tend to come only in the version their publishers produce, but when it comes to Lucretius or Melville, you can find a choice of version. You don’t have to put up with yellowing paper or brittle glued bindings.

I bring this up, because I have settled on a prodigy of good book production. The paper is acid free, the type is neither too small or too big, the ink is solidly black, the margins adequate for scribbling, the bindings tight and the covers covered in a beautiful linen. As a bonus, each book comes with its own ribbon bookmark attached to the spine. They are sold under the name Everyman’s Library and in the U.S. are an imprint of Knopf.

The current editions are not the same as the classic Everyman’s Library books that are the hidden treasure dug up in every excavation of a dusty old used bookstore in an off-the-way road in rural America. In the past, avid prospectors of used books to read (as opposed to the more modern perversion of seeking first-editions and rare books for a “collection” shown off to visitors and seldom actually read) would seek out Everyman’s books and their American equivalent, Modern Library books. They were cheap, well made and gave you access to all the classic novels and poetry you craved. You can still uncover Modern Library books on the swayback shelves of those bookstores, but some of them have actually become “collectible,” and therefore unaffordable. 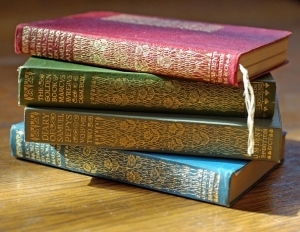 The original Everyman’s Library was devised in 1905 by J.M. Dent and Company in London, with the idea of creating a 1,000 book library of world literature affordable to the ordinary man (and woman). The books originally sold for a shilling apiece (roughly $5 in current U.S. dollars). The books were beautifully designed, in imitation of the books of the Kelmscott Press, and were pocket size and hard cover. I still own several titles, including the entire Spectator series written by Joseph Addison and Richard Steele, from the 18th century. Four volumes of enameled prose.

The current Everyman’s Library books are full size, with nice curved spines, clean linen hard covers, color coded by which century a book was written in, and offer more than 300 titles. They also produce a series of pocket-sized volumes of poetry that you can carry around with you without tearing open the corners of your jacket pockets.

The first of the new Everyman’s Library I became aware of was when I looked for a version of Tristram Shandy I could read. The one I had was a lousy paperback in dense print with insufficient leading between lines. It was an offset print version poorly inked, meaning the letters often grayed out on the yellowed pages. Pfui. But I found a used copy of the Everyman’s Library version and it was as if the sun shone from behind the clouds and the angels’ sang. I read it cover to cover, enjoyed the hell out of it and realized how much the book design helped me navigate it.

I bring all this up because I am presently reading the Everyman’s Library edition of P.G. Wodehouse. It is 840 pages of Jeeves, Bertie Wooster, Blandings Castle and Mr. Mulliner in prose as frothy as the foam above a double latte. Friends who know me well knot their eyebrows and wonder what’s going on with Nilsen. Where is the man who would rather collate translations of Vergil than dive into a chocolate sundae?

As it turns out, one needs some balance in a life. As I consider my recent reading history I see the obvious pattern. After diving deep (and I mean deep) into Timothy Snyder’s Bloodlands, I needed to blow off the louring clouds, and took on John Updike’s Bech books — collected, as it turned out, in an Everyman’s Library volume. Enjoyed the heck out of them.

After that I took on Alexander Solzhenitsyn’s Gulag Archipelago. It is three giant volumes long of depression, depravity, injustice, sadism and totalitarianism. I got through the first volume and a half before I had to put it down for a spell. In the interim, I took up Jean Renoir’s memoir of his father. It was a joy to read. I am not a big fan of Pierre Auguste’s paintings, but his son is an excellent writer and I came to value Renoir pere as a man, even if the book didn’t change my thinking about him as an artist.

It felt like diving into the sea, coming up for air, diving down once again, and coming up into the sunlight for relief.

After Renoir, I got back into the Gulag, but soon needed more oxygen, so before I even finished Vol. 2, I headed off to reread Melville’s I and My Chimney — my favorite of his Piazza Tales, and then into A Mencken Chrestomathy, for a good draught of cynicism and cold water before returning to the Solzhenitsyn. But I got sidetracked by another Everyman’s Library book: The Book of Common Prayer.

I don’t know if it was the recent election or what, but I felt I needed the cleansing of some very pure language. You may ask, why would a hardened atheist decide to read Thomas Cranmer’s iconic prayer book? It certainly wasn’t for the theology; it was for the words, so familiar to us, speaking to us of hundreds of years of linguistic tradition, a source of all we take as serious and dignified in the English language. It is hard to turn the page and not find some phrase that is our mother tongue’s subconscious. There is comfort in those cadences.

After that, I took on D.H. Lawrence’s Mornings in Mexico. I enjoy his travel books more than his fiction. He is one odd fellow, idiosyncratic, often wrong-headed in the extreme, but always fun to read.

Other palate-cleansers I have dipped into include Nabokov’s Speak, Memory, Laurence Sterne’s A Sentimental Journey and James Michener’s Tales of the South Pacific.

When I have done with Wodehouse, the next in the queue is War and Peace. It is a book that if I were to go to a Roman Catholic confession, I would have to admit, “Father forgive me, for I have sinned. I have never read War and Peace.” I know it is on the list of books that one should have read, but although I had begun the thing several times over the years, I had never found a volume comfortable enough to read. The thing is immense. One version I bought came with a complimentary hydraulic lift to help lug it around.

Then I discovered the Everyman’s Library edition — in three easily handled volumes, breaking up the density into digestible bits. It comes in its own box, with small wheels attached to help roll it around. (Actually, I’m making up the wheels, but it does have its own box.)

It sits there staring at me, waiting for me to finish with Bertie Wooster and challenging me with Pierre Bezukhov. If I make it through — like trudging from St. Petersburg to Vladivostok — I will find something a little lighter to serve as a sherbet dessert before taking up Vol. 3 of the Gulag.