In the spring of 2002 my wife and I attended Easter Mass at the cathedral of Notre Dame de Paris. Since then we have returned to the church so many times, I’ve lost accurate count. It became a kind of landmark anchor for our visits to the city.

So, when I saw the video of the flames spewing out of the transept roof this evening, my heart sank. It was for me very like the feeling of watching the World Trade Center collapse 17 years ago.

There are other more beautiful churches in France, and at least one — Chartres — that has a more sacred place in my imagination. But the church in Paris was home. I say that even though I am not a Christian. I have no religion. But that doesn’t mean I was immune to the spiritual power of the architecture. On each visit to Paris, we would make time to spend long hours in the cathedral to soak up its metaphorical recreation of the vastness of the cosmos and our place in it. 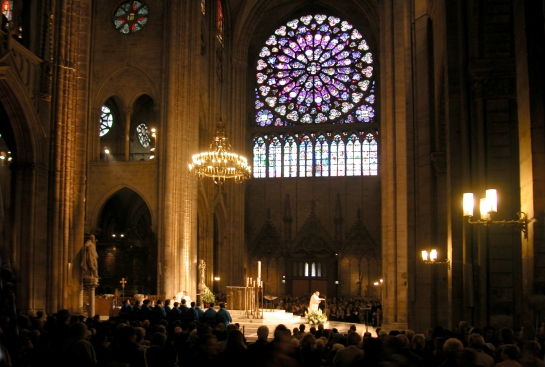 Back during our first visit to the city, we went to the big Easter mass that was being celebrated. The church was packed. Most of the visitors were celebrants, but a good number around the edges were just tourists.

But at the altar, spotlighted like a good stage, there were priests and a choir, which was chanting plainsong that echoed through the building like surf.

A priest was swinging a censer around the altar, spreading smoke through the crossing of the transept.

It took a while to get past the “gee whiz, what did we stumble into?” But soon we recognized the beauty and theater of the ceremony. It was intoxicating to hear the chant, melismatically floating like the censer smoke, under the brilliant blues and reds of the Rose Window, high above.

One doesn’t have to be a believer to appreciate how the mass, spoken and sung in the space built for it, 700 years ago, addresses the magnum misterium. Both Carole and I were soon caught up in it.

The vaulting, the lights, the stained glass, the church, spread out in its cruciform, that is also the diagrammatic shape of my body and your body, with the vast ceiling which is metaphorical of the inner dome of the skull — we could see how the priest at the crossing of the transept — the place that counts as the heart of the cruciform homunculus — was casting us out into the cosmos, out into the mystery, out into an intense beauty we only rarely let ourselves be aware of.

I was shaken. I believe Carole was, too. One listened to the choir, now taking on a later music, a descant from the 15th or 16th century, with the soprano floating her melos out over an altos lower harmony, and looked up, and on raising eyes, one sees the axis of the rose window, with all the light pouring through the interstices in the tracery, very like the angels dancing around the divine center of Dante’s mystical rose. 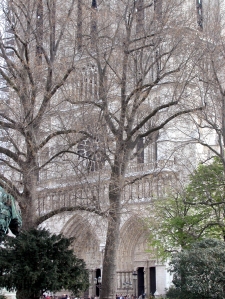 And I heard in that melisma something completely separate from an esthetic event. It became the closest thing I have ever heard to the human equivalent of a bird’s song, a sound beautiful beyond its need to be beautiful, uttered out of instinct and joy. Shelley’s skylark, perhaps.

I don’t want to trivialize the event with frivolous hyperbole. But I swelled inside, and tears broke onto my cheek.

It’s one thing to see pictures in books. It’s quite another to experience the flesh. The Rose Windows are huge, colorful, intricate. They serve as metaphors for the same thing as Dante’s mystic rose at the end of the Paradiso. Radiant, radiating, they speak — no they sing — of a divine order, a shape and meaning to the universe. You can practically hear a great C-major chord sung by a Mormon Tabernacle Choir, or more apt, like the great C-major chord in Haydn’s Creation at the moment they chorus sings, “And there was … LIGHT!!!!!”

As a well-known atheist, I don’t believe in anything like the theology of this masonry, yet, I cannot help being moved deeply by the spiritual metaphor. Ranks of angels, rotating as they sing, like some ethereal Busby Berkeley choreography, singing in 8-part polyphony to elaborate harmonies, sliding from suspension to suspension — dissonance, resolution, all headed for that great C-major.

A machine is always more beautiful when it is running. A cathedral, as Carole said, is a machine to take you someplace.

That day, we saw that machine with all its gears rotating and its cylinders pumping. We were privileged to witness the building doing what it was designed to do, like driving a Maserati across the countryside, or seeing the dynamos at Hoover Dam spin out electrical power.

We stepped out of the church after about a half hour. The bells were pealing all over town. Easter morning bells, not only from Notre Dame de Paris, but from every small church and chapel.

Then, I reentered the cathedral through the West door. I thought I’d see what the service was like looking down the spine of the nave. The choir was silent, but the organ was playing some Messaien. I could hardly believe it: The French composer was being taken seriously enough to play at an event as important as this. And the music was transformed by the place and event, too.

It was no longer an esthetic construct. Messaien is a joy, rich as pastry, if you have the ears to stand it. But Messaien didn’t write music — especially his organ music — so his listeners could get their jollies. No, he wrote it out of religious devotion to serve a function.

And it, like the cathedral itself, became a machine to take you somewhere. It couldn’t have been designed to be more perfect for its job.

To see the mass, hear the choir and the organ, on an Easter morning, in a 13th Century cathedral, Gothic to the core, with those windows, that color, that light, that theater: It is one of the highlights, not of that trip, but of my life. I was overwhelmed, which is the only appropriate response to the Great Mystery. 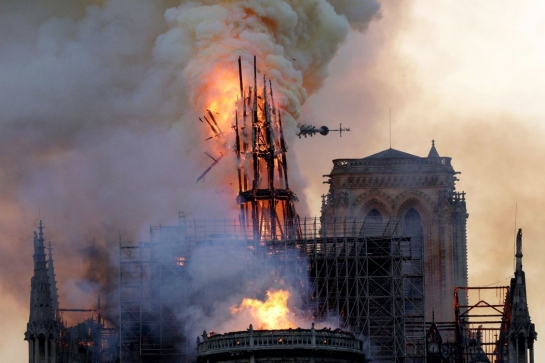 So you can imagine the shock, the sinking in my heart, as I saw the flames, the falling spire, the smoke and soot spreading over the sky as the sun went down. It is a piece of me that is wounded. Commentators keep talking about the history that is lost in the fire, and I know it is my history, too.

I have written about the history of the cathedral, and its 19th century renovation (link here).