The last real day and night in Paris; the next day, we suffered the indignity of Charles de Gaulle airport, the tedium of being stuck on a jet for umpteen hours, and the disappointment of returning to “real” life, jobs and the traffic on Seventh Street and Camelback in Phoenix.

Les jardins. The gardens. The trees, flower beds, weathered statues, green-painted benches, the gravel walkways, with the dust blown up by the gusts. These French gardens are not just places to see nature. In fact, the nature in them is so unnatural as to make the idea silly. But, they are places where nature is rendered symbolic, so that even the real flowers function as symbols for flowers. That doesn’t make them any the less beautiful: The tulips especially this time of year, are open with that gesture of the hand held upright and the fingers together giving way to the fingers spread apart to the sunlight. 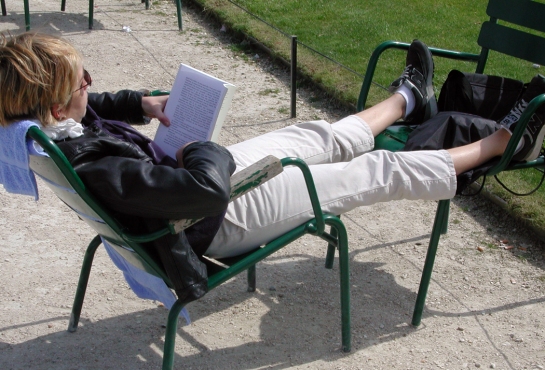 We walked in the Tuileries today, that remnant of Catherine de Medicis royal front yard. It was once the property of the monarchy; it is now owned by les citoyens de Paris, who use it on a Sunday morning to sit and read the paper, to play boules on the gravel, to ride the ponies or the carrousel, to sit at the edge of the water by the fountain and hold hands. But mostly, it is used as we used it: to walk through.

The half nearest the Louvre is open, grassy and planted with flower beds. The far half is covered in horsechestnuts. The whole is populated with Olympians, nymphs, Bourbon matrons and the illustrious of science and the arts, all stony in their marble, sandstone or bronze. The pigeons roost in Hercules’ hair. 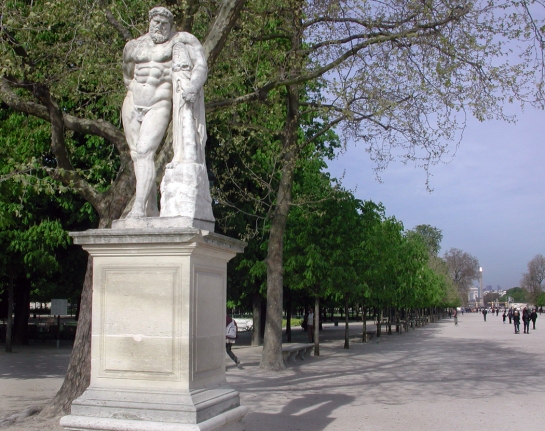 This French idea of a garden — a French idea of Paradise, the original garden — is one like so much else French, a curious, even tortured combination of nature and art, or the natural world and the procrustean world of “le systematique,” or the theory, or the “logique.”

It goes against everything I thought I held dear about English gardens, about wildflowers in the woods, or even my own vegetable gardens. Those are more about real flowers, about appreciating the azaleas, geraniums or spiderwort. These French gardens remove you from the actuality and put you in the position of appreciating them esthetically, which is quite different from appreciating them sensuously. It is an important difference: All high art is stylization, whether it is a waltz or a sonnet or a Shakespearean tragedy. One can see these French gardens aspiring to the same status. They don’t want us to feel cozy, but to feel serious, to attend, to hold oneself in relation to the nature parodied. 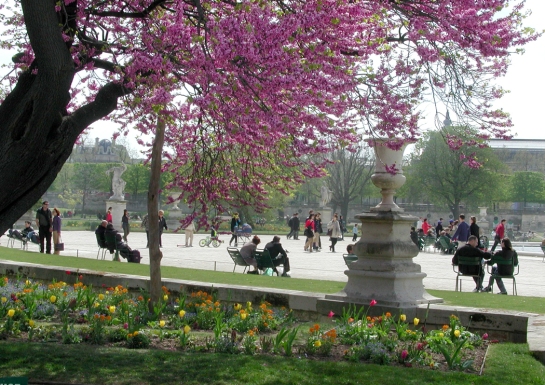 In the wild, you feel yourself in nature, and the self more or less dissolves, leaving the nature. In the French garden, the self is amplified by being the perceiver rather than the participant. 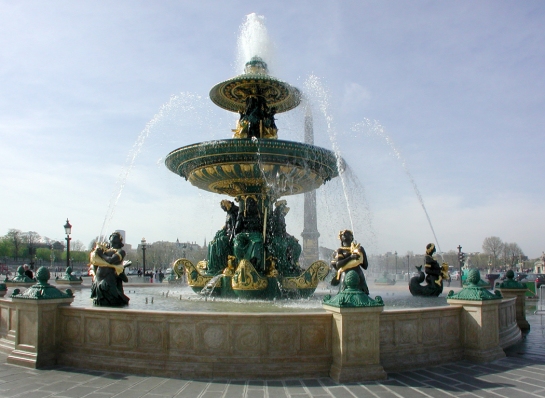 In theory — to be French myself — I should hate the French gardens. I always thought I did. But the actuality is so highly wrought, so magnificently manufactured, so detailed and thought through, I cannot help myself admiring it, being moved by it, and actually loving it.

The Roman amphitheater and the jonquils and tulips at the arena, and the little boys playing soccer. Also the Tuileries gardens today, and all the beautiful flowers there and the statues. And the large fountain with the black figures decorated in gold and green, by the obelisk. The happiest event of the day was seeing the waiter at L’Etoile d’Or and having him recognize me and asking me to speak French. I loved seeing the children in the pony cart and the little girl riding the pony at Tuileries, and the carrousel there. What I enjoyed most during the day was walking through the Tuileries garden today with Richard. I wish we could do it again tomorrow morning. 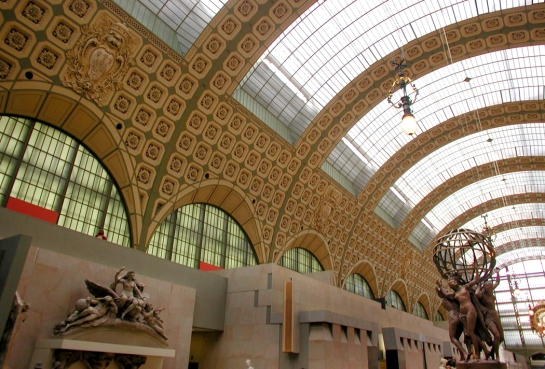 I know what my least favorite thing is: that today is our final day in Paris. I’ve been grieving all day. Still, the Tuileries — Paris’s answer to Central Park — was like living in a live, full color Atget photograph, with the horsechestnut trees thick with flowers on their panicles, and the flower beds looking like the mille fleur embroidery in the tapestries. The short trip through the Musee d’Orsay was in all ways a disappointment, largely because of the crowds. But we had seen many of the most important paintings and sculptures in special traveling shows in the U.S., so it wasn’t like we hadn’t seen first-rate Monets or Van Goghs before. We pretty well wanted to get out of the joint as soon as we got in.

What never fails to give us pleasure is just walking around the streets. We walked along the quai, or even up the Rue Monge near our hotel, and look in the shop windows, drool at the patisserie, see what French vacuum cleaners look like, watch the people sitting at the round tables in the cafes sipping their cafe au laits. The cars are different; the way people walk or cross streets is different. It is all utterly and completely fascinating.

Our first trip to Paris was a kind of experiment. We worried — unnecessarily at it turned out — about not speaking French, about money conversion, about the pickpockets that guidebooks warned us of, about strange foods and the famed rudeness of Parisians. None of this was true. Parisians were uniformly warm and friendly, always helpful and frequently generous. After the first trip to France, I never brought along another money belt. Silly idea. And the era of plastic money meant conversion and cash were not serious issues. We paid at almost every restaurant with the bank card. 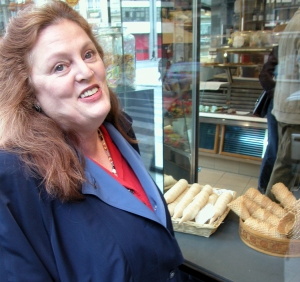 And almost everyone we encountered either spoke English, or a little English, or with hand gestures, pidgin French and rudimentary English back-and-forth, we communicated just fine. I learned very quickly that you only really need three phrases in French to get by just fine: “Bon jour;” “Merci;” and “L’addition, s’il vous plait.” That is, “Good day;” “Thank you;” and “Check, please.” And the last can be sidestepped by the universal gesture of mime-scribbling on the palm of your left hand while smiling at the waiter.

As for the food, it turned out the stranger, the better. We have never had a bad meal in France. Even the cheapest dive we went to, for a cheap, fast lunch, gave us repast more delicious and better prepared than most we’ve eaten in the good ol’ US of A.

I remember particularly a day we popped in to a little charcuterie off the Boulevard Saint-Marcel and asked for some cold cuts we wanted to take back to our hotel room, and the proprietor smiled and spent about five minutes making up the most elaborate design on his platter, with about 10 different types of meat, amplified by several vegetative garnishes and pastas, and insisted we taste samples of each before he arranged each type on the plate. The obvious pride he showed in his workmanship, and in the quality of his meats, was not just palpable, it was absolutely joyous. With each sample he stared into our faces like a puppy dog to savor our approbation.

At a pizza joint we went to for a fast dinner, the waiter, Madjid Lahrouche, became a friend, and the second time we showed up, he wouldn’t give us pizza, but instead served us the cous-cous he made in the kitchen, so he could show us the food he grew up with as a Berber in North Africa, with great hunks of lamb and a tremendous soup of vegetables and potatoes. His grin was infectious. We have been back.

And going back is the watch-word. We have been back to France many times; on later trips, we tried to spend at least a month each time, and on subsequent trips, we got out of Paris, rented a car and have been to almost every quarter of the country, from Picardy to Provence, from Brittany to Alsace. Driving in France is a dream; one should not fear it. Signs are easily understood, and off the main freeways — which no sensible person want to drive on, anyway — traffic is light and easy, with many back roads practically empty.

When we are not there, we are always homesick for la belle France. 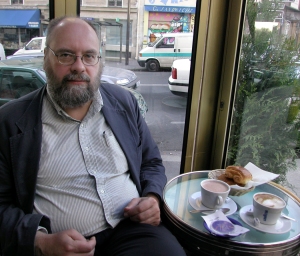 It has been an eye-opener to re-read my notes from our first trip, posted in these recent blogs. On later trips, the writing is less effusive, and show, I hope, a deeper understanding and appreciation for the culture, less wide-eyed and golly-gee than some of these entries. But there was a genuine openness that I sensed in these original notes that I thought might sustain an interest for readers. And I went through and re-edited the photographs I took from that trip and discovered several I had originally passed over, 14 years ago.

I certainly recommend for all Americans that they get out of their own country and limited experience and get to know a bit of the other parts of the world. It needn’t be France. It could be Japan, South Africa, New Zealand, Chile, Iran — just somewhere to escape the shackling prejudices of comfortable middle-class American assumptions. We are a provincial people, and that is actually dangerous when we are also the most powerful and influential nation in the world.