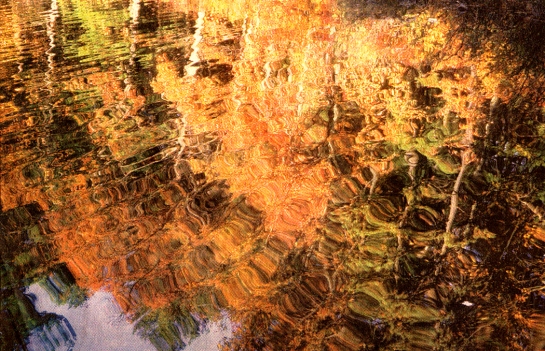 Four seasons may seem like enough. Maybe for a resort hotel. It is the conventional way to divvy  up the annual circumambulation of the sun. But four is an arbitrary number. In some places, two seasons are all there is, rainy season and dry season, or in Arizona: unbearable heat, and respite from unbearable heat.

And even in those climes where the traditional four account for our calendar, there are really any number of discernible seasons: Indian summer, midwinter spring, mud season. In Maine, there’s black fly season; there’s tourist season at the Jersey shore. Many places have their annual infestations.

Some of the most interesting moments of the annual cycle are those that fall between the seasons, those moments that are neither quite winter nor quite spring, or neither summer nor fall.

Of these, my favorite has always been that slip in time between autumn and the harder breath of winter — when the color has passed from the cheeks of the trees but not all the leaves have dropped to gather in soft, brittle piles on the ground.

It was like that near the end of October at Walden Pond in Massachusetts, about 30 miles west of Boston. The Canada geese were flying south in droves across the crisp sky, the alders at water’s edge were naked except for the tiny seed cone at the tip of each branch. The pond water was beginning to chill, but not so much that the fish lost their will to bite the hook.

Walden Pond is a small kettle pond, left in place just south of Concord by the glaciers that covered the land 10,000 years ago. It is essentially a dimple left in the ground by the weight of the ice. When the ice melted, the water remained in the depression.

Around the pond, the land rises up in places something like 20 feet above the water level in formations the geologists call ”eskers,” which are the loose junk left behind by the ice. The twin tracks of the railroad run along the back side of the pond.

On the October morning, before the sun arises, the temperature is in the low 40s and desert-dry. You can see the light catch in the tops of the trees along the heights of the eskers and slowly descend into the water as the morning progresses. 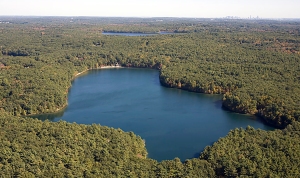 Walden is an oblong stretch of lake, with one shallow bubble along its northeastern side. A bit of the lake is cordoned off by a footpath causeway, leaving a shallow lagoon trapped in the backwater.

Most of the trees’ leaves have dropped, leaving only the maroon of the red maple and the bright tan of the beech tree still hanging. A huge number of the leaves have collected on the surface of the lagoon, making it look as if it were paved in tree droppings.

On the water, about 50 yards out, I can see four ducks buzzing along, with their necks held flat on the water and their faces half-submerged as they wiggled their heads back and forth, gleaning a meal from the detritus of the pond. As they swam this way and that, moving like feathered zambonis, each left a wake behind it cleared of leaves.

Immediately, what had seemed a randomly mottled pond surface of tree-junk took on order and meaning as the old ”contrails” remained, leaving the water scratched with a history of duck dinners. Their names may have been ”writ in water,” as Keats had it, but those signatures had persistence.

I crouched down at the mucky edge of the water and waited. Patience pays off. The ducks slowly swam my way. Twenty minutes later, they were so close I could have stroked their slick, waterproof feathers. One started and flew off, leaving two females and a single male mallard. They scooted in circles, clapping their bills through the jetsam. One of the females came up to the water’s edge where I knelt down and began poking her beak into the mud. She found something to eat and continued.

A small boy approached on the path, calling back to his mother. I looked at him, put my finger to my lips to hush him and pointed at the birds. He looked briefly and walked right past. I wondered what he could have been racing to find that wasn’t right here: three ducks in arm’s reach.

It was early on a Sunday morning and the path around Walden Pond had perhaps 10 hikers on it. It is about a mile and a half to circumambulate the pond, so it never seemed crowded.

In addition, there were a dozen or so fishermen standing at the western and southern ends of the pond with their poles anchored in the sand and bobbing weights hanging like goiters from the poles.

”Trout. Rainbows and brookies,” he said in that dodgy Boston accent. ”This is our second time out this year” — said as “yee-ah” — “and we haven’t caught anything yet. There’s a fellow down the way there who pulled in a couple of them this morning.”

When I got to him, he had them strung on a line and submerged back in the water about three feet out. Each was about a foot long, one was speckled.

”Mighty good eating,” was all he said.

By the time I made it all the way around the pond, the sun was up and the temperature had climbed into the upper 50s. The light gleamed on the bark of the tree trunks and glared on the remaining leaves.

A century and a half ago, when Walden Pond first became known to a wider public, it was a quiet place, a few miles outside of town, where only the muskrats and crows came for recreation.

The silence was shattered only momentarily when the train to Fitchburg came through. Nowadays, a road passes right by the pond, and a divided highway sits only a quarter-mile away.

The sound as you walk across the far shore of the pond is a constant but subdued roar of whizzing cars, mixed with an occasional jet airplane and the same railroad commotion.

Oddly, though, as you walk around to the edge of the pond nearest the highway, its noise becomes blocked by the esker and the pond seems quiet once more.

Journalism is a funny profession, because its readers read about what happened yesterday and its reporters are writing what will be published tomorrow. It has little use for today.

But a day as distinct as this one on Walden Pond, in the cusp between the seasons, speaks only of the deliberate now, the specific and incandescent moment, as thin and sensuous as the membrane of the water’s surface as you stick your arm through it to pick a pebble from the pond’s bottom.