Scarcely 100 miles separate the lowest and highest points in the 48 states.

There is no more striking contrast in America than to drive from Death Valley to Yosemite Valley. In July, it may be 120 in one place and snowing in the other, only a hundred or so miles to the west.

The range of the Sierra Nevada blocks the way west for hundreds of miles; if anything can be called the bony spine of California, the mountains can. They continually surprise with color, size and expanse. John Muir called it the “Range of Light,” and he didn’t have to be a poet to think that up.

There are only a few places where pavement jumps the hump.

One of those is the Tioga Road over Tioga Pass. It climbs and twists to the 9,945-foot summit and the first time I drove it, it closed over with gray sky and fog. The fog turned to ice and, just as we passed the entrance gate to the national park, it turned to great gobs of wet snow. The road winds around the mountains and though there are sharp twists and drops of thousands of feet, there were few guard rails.

But I hardly knew the danger, because there was no declivity to be seen, not much of anything but wet, icy pavement and the occasional car going in the opposite direction.

I drove slowly and with tight fists on the steering wheel. As we descended from the pass, the snow changed slowly back to sleet and then rain. The glorious views promised by the road markers were curtained by the mist. All but the road and a few trees alongside it were white with fog.

We reached the Tuolumne Meadows Visitor Center in a heavy drizzle and went in to find a warm and dry wood fire in their Buck stove. Outside, it was in the low 40s; inside was a toasty 70 degrees. The building was an old one of log and hand-hewn boards.

I had always wondered how to pronounce “Tuolumne” but I had never guessed “twa-lum-nee,” which is what the ranger said. 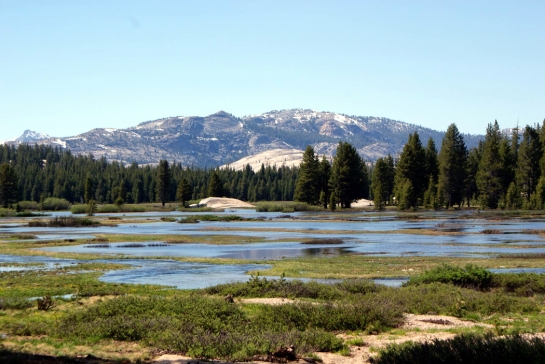 The meadows, the biggest in Yosemite, stretched for a mile or so, rolling softly in short grasses and erratic boulders. It was bissected by the Tuolumne River, a shallow brook meandering among the oozy weeds. The fog was lifting and we could see the bases of the mountains that ringed the meadow, but their peaks were still obliterated.

Tioga Road continued all the way through the park, past Lake Tenaya and Porcupine Flat. The lower mountains, beginning to show themselves, were shear domes of exfoliating granite with twisted junipers growing from solid stone in their higher elevations. All the naked stone and rushing water filled every expectation I ever had about the high Sierra.

We had not planned on stopping at the valley. I half wanted to go and see the glories pictured in the Ansel Adams photographs, but I also knew that Yosemite Valley is one of the most crowded places in all the national parks, and I hate crowds.

And I knew that many of the Adams pictures had been snapped in the ’30s and ’40s, when there were fewer tourists and fewer buildings:  Judging from our map, there appeared to be no fewer than 200 buildings on the valley floor.

But we went, anyway, and it turned out wonderfully. There are giant hotels and vast campgrounds in the valley, but a short jaunt around a bend in the road and they disappear.

The gray rock walls of the valley were showing to a height of 800 feet and were obscured higher than that with the low-hanging scud that scooted by in the breeze, changing the face of the valley from moment to moment. 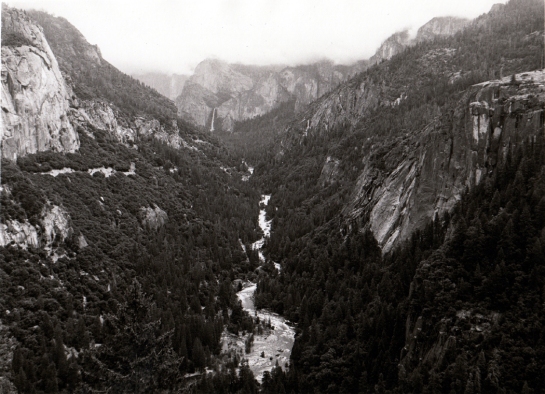 Through the center of that stony valley cascades the Merced River. In the spring, it floods and in the late summer, it can dry up. We were halfway between the extremes and it burbled satisfyingly between lines of rustling willows.

With the dark trees in the foreground and the cloudy ceiling over the vertical rock walls behind, it would have been hard to come up with a more sublime scene. No Bierstadt can compare, no Moran, no Cropsey. They seem literary; the scene before us was breathing the now.