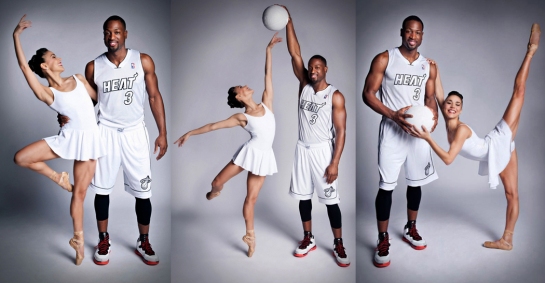 Basketball, when truly appreciated, is not merely a knock-down, drag-out testosterone-drenched form of male competition. It can also be a thing of beauty, a form of ballet that even tough guys can appreciate.

Looking from one direction, no one who has watched ballet in rehearsal, with its sweat and grunting, with the sound of feet thudding on the wooden floor, can doubt ballet is as much athletic achievement as art.

But from the other direction, neither should we be blind to the aesthetics of the NBA. At its best, the game gives us grace and transcendence.

One thinks of Michael Jordan, performing a grand jete, hanging in the air like a Japanese lantern, light as a skein of silk, delighting the crowd, connoisseurs of the art who can recognize a master when they see one. 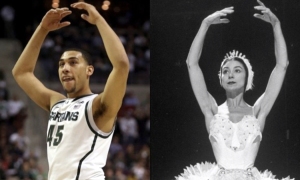 I’m not thinking of the goofy, arts-as-camp beginning of West Side Story, where the Sharks and Jets finger-snap their choreographed way through a bout of playground B-ball. A real fan would gag.

No, I mean the muscled, sinewed power under complete control of an Elgin Baylor.

Dance, after all, is nothing but graceful, controlled movement. A Baryshnikov could spin in the air and hit the floor with no noticeable impact and swoop into a demi-plie as if he had no weight at all. Every move contributed to the total effect of animal muscle tuned to the hum of an angel’s song.

Connie Hawkins, for example. Like Nijinsky, he could hang in the air for what seemed like forever, but in reality was only seven minutes. Hawkins could, while in the air, switch the ball from one hand to the other five times before shooting. 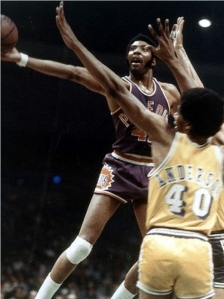 I came to Roundball in the 1970s and ’80s, listening to the Boston Celtics on radio with Johnny Most and his gravel voice play-by-play. And it was then that the issue of grace was first brought to my attention. My college friend who came to school on a basketball scholarship, approached the game esthetically, he said, and was put off by the win-at-all-cost jock attitude. Needless to say, he didn’t last long on the team. But he taught me the esthetics.

He was enormously talented, and when we played Horse in the back yard, we had to have a singular variation to the game: I played Pig and at the same time, he played Archaeopteryx. He still won every time.

Not every NBA player is a Baryshnikov, of course. Only a choice few stand out as danseurs nobles.

The league has also had its share of Billy Paultzes and Manute Bols, the ungainly klutzes who have performed their tasks with spastic awkwardness.

Billy ”The Whopper” Paultz, for instance, was one of the original wide bodies. He was there for rebounds, not shooting. When he did take a jump shot, his heels never broke contact with the floor. He had negative hang time.

Or Jack Sikma, who was ”robo-center.” Although a fine player for Seattle, he moved mechanically. You could almost hear the gears whirring when he turned for his jumper. That’s not ballet.

But that’s the esthetic bottom end. In between are the journeymen, who fill the lineups and can rise to the occasion in a good game and produce a memorable show.

Unfortunately, it seems as if the NBA these days no longer values the esthetic side of the game. The heyday of the leaping danseur was the ’70s and ’80s. The best games then seemed more like aerial warfare than infantry slogging it out in the trenches.

Jordan was the last — and greatest — of a generation of gazelles that began with Baylor, continued through Hawkins and reached critical mass with Dr. J.

Since Jordan retired, the game seems headed toward a more earthbound and elbow-swinging muscle game. Hang time gives way to bang time. Intimidation counts more than style: Shaquille O’Neal wasn’t so much a leaper as he was a Sherman tank.

Nowadays, I have a harder time keeping interest in the NBA.

Critics of the game complain about what they call ”thugball,” but it’s always been part of the game, too. It’s just that too often these days, it seems to be all of the game. 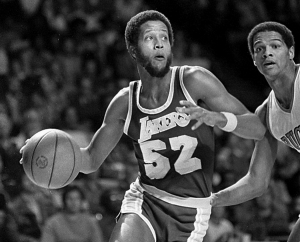 But even that aspect of the game has its art. One recalls Wes Unseld in his prime with the Bullets, built like a tree stump, immovable under the opponents’ basket, daring leapers to bounce off him. There was nobility in that. Like a sturdy Nureyev providing a rock-solid pedestal for the pinioned Margot Fonteyn.

Yet, it is still Jordan whom one remembers most, or Magic Johnson, or Jamaal Wilkes, who never seemed to break a sweat while performing the most amazing acrobatics. His nickname, Silk, said it perfectly.