I began life as a copy editor, which means, I had to know my commas and em-dashes. My spelling had to be impeccable and I memorized the Associated Press Style Book, which taught me that the color was spelled g-r-a-y, not g-r-e-y. Except in “greyhound,” that is.

It is a line of work I fell into quite naturally, because from the second grade on, I have had a talent for words. I diagrammed sentences on the blackboard that had the visual complexity of the physics formulae written on his whiteboard by Sheldon Cooper. I managed to use my 10 weekly vocabulary words, tasked with writing sentences for each, by writing one sentence using all ten. I did OK with math, but it was never anything that much interested me, but words were another thing. I ate them up like chocolate cake. 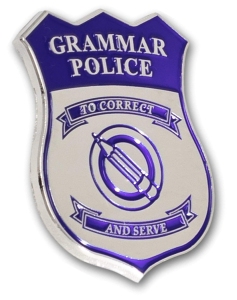 The upshot is that I am a prime candidate for the position as “Grammar Cop,” bugging those around me for making mistakes in spelling, punctuation and usage. And, admittedly, in the past, I have been guilty. But as age softens me, I have largely given up correcting the mistaken world. And I have a different, more complex relationship with language, less strict and more forgiving.

The cause for this growing laxness are multiple. Certainly age and exhaustion are part of it. But there is also the awareness that language is a living, growing, changing thing and that any attempt to capture it in amber is a futile endeavor.

But although I have come to accept many changes in speech that I once cringed at — I can now take “their” in the singular (“Everyone should wash their hands”) and have long given up on “hopefully” — there are still a handful of tics that I cannot get over. I try, but when I hear them uttered by a news anchor or starlet on a talk show, I jump a little, as if a sharp electric shock were applied to my ear.

The first is “I” used in the objective case. It gives me the shivers. “He gave the award to Joan and I.” It gets caught in my throat like a cat’s fur ball.

The second is using “few” for “less.” I know that the usage has largely changed, but it still assaults my ear when I hear, “There will be less pumpkins this Halloween, due to the drought.” Ugh.

A third is the qualified “unique,” as in, “His hairstyle is very unique.” It’s either unique or it isn’t.

Then there are common mispronunciations. “Ek-setera” is just awful. Although, I did once know someone who always gave it its original Latin sounding: “Et Caetera” or “Et Kye-ter-a.” Yes, that was annoying, too.

The last I’ll mention here is the locution, “centered around.” Gets my goat every time. Something may be “centered on” a focus point, or “situated around” something, but “centered around” is geometrically obtuse unless you’re discussing Nicholas of Cusa’s definition of the deity, whose center is everywhere and circumference is nowhere. 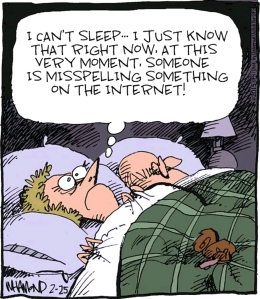 Others have their own bugaboos. One friend cannot get past the confusion between “lay” and “lie.” She also jumps every time someone uses “begging the question,” which is misused 100 times for every once it is understood.

Of course, she may be more strict than I am. “There have been errors so egregious that I’ve stopped reading a book,” she says. “I just stomp my foot and throw the book away.”

Her excuse: “I was an English major.”

There are many other issues that bother me, but not quite so instantly. I notice when the subjunctive is misused, or rather, not used when it should be. If I were still an editor, I would have fixed that every time.

I am not sure I will ever get used to “like” used for “said.” And I’m like, whoever started that linguistic monstrosity? I also notice split infinitives as they sail past, but I recognize that the prohibition against them is a relic of Victorian grammarians. It is too easy to lazily give in to those ancient strictures. 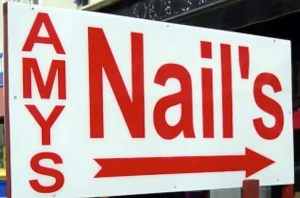 So far, I’ve only been talking about catches in speech, although they show up in print just as often (you can actually come across “ect.” for “etc.”) But reading a book, or a newspaper or a road sign and seeing the common errors there can be even more annoying. There is probably nothing worse, or more common, than the apostrophe plural. You don’t make something plural by adding an apostrophe and an “S.” “Nail’s” is not the plural for “nails.” This is encountered endlessly on shop signs.

And digital communication is fraught with homophone confusion. “They’re,” “there,” and “their,” for instance, or “you’re,” and “your.” I admit that occasionally this is just a mental hiccup as you are typing. We all make mistakes. I have sometimes put a double “O” after a “T” when I mean a preposition. That’s just a typo. But there are genuinely people who don’t seem to notice the difference with “to,” “too,” and “two.” (I have great tolerance, however, for the ideogrammatic usage of “2” for “to” in electronic messaging. I find it kind of amusing to see the innovation in space-saving for Twitter and e-mail. I may even have been guilty myself of such things. Indeed, there is a long history of this sort in handwritten letters in the 15th to 18th centuries, when “William” was often “Wm,” and “through” was often “thro.” Paper was expensive and abbreviations saved space.)

Some frequent typological absurdities make me twitch each time. I really hate seeing a single open-quote used instead of an apostrophe when a word is abbreviated from the front end. You almost never see “rock ’n’ roll” done correctly.

There are lesser offenses, too, that I usually let pass. “Impact” as a verb, for instance. It bothers me, but the only people who use it tend to write such boring text that I couldn’t wade through it anyway. (I wrote about the management class mangling of the language in what I call “Manglish.”) “Different than” has become so normalized for “different from” that I’m afraid it has become standard English. Of course, the English themselves tend to say “different to.” So there.

There are distinctions that have been mostly lost in usage. “Can I” now means the same as “May I” in most circumstances, and almost no one still makes a distinction between “shall” and “will.”

Many of us have idiosyncratic complaints. I knew someone who complained that “laundermat” was not a word. We saw such a one on Vancouver Island when visiting. “It should be ‘laundromat,’” she said, arguing the parallel with “automat.”

And there are regionalisms that bother some, although I glory in the variety of language. One person I know complains about such phrases as “had went,” but that is a long-standing Southernism and gets a pass, as far as I’m concerned.

And much else is merely idiom. If you get too exercised about “I could care less,” please relax. It means the same thing as “I couldn’t care less.” Merely idiomatic. Lots of grammatical nonsense is now just idiomatic English. Like when the doorbell rings and you ask “Who’s there?” and the answer comes back, “It’s me.” If you hear “It is I,” you probably don’t want to open the door. No one talks like that. It could be a spy whose first language is not English. Better ask if they know who plays second base for the Brooklyn Dodgers (old movie reference).

And the Associated Press hammered into me the habit of writing “past week” instead of “last week,” on the principle that the previous seven days had not, indeed, been terminal. You can take these things too far — but I am so far brainwashed not to have given in. “Past week,” it will always be.

I may have become lax on certain spelling and grammar guidelines, but one should still try one’s best to be clear, make sense, include antecedents for one’s pronouns and be clear about certain common mistakes. “Discreet” and “discrete” are discrete words. And someone I know who used to transcribe her boss’s dictated letters once corrected him when he said a client should be “appraised” of the situation and typed instead, “apprised.” He brought her the letter back and complained that she had misspelled “appraised.” Being a man and being in management, he could not be persuaded he was wrong. She had to retype the letter with the wrong word. There’s just nothing you can do with some people.

Language is just usage at the moment. It shifts like the sands at the beach, what was “eke” to Chaucer is “also” to us. What was “conscience” to Shakespeare is “consciousness” to us. Thus does conscience make grammar cops of us all. We don’t learn our mother tongue, we acquire it and what we hear as babes becomes normal usage. Ain’t it the truth?